Ivory up in Flames, but Who Really Noticed? How Messages on Elephant Poaching Might Be Missed

11 Mar 2018 – The tusks of more than ten thousand elephants went up in flames in Kenya on April 30, 2016 – the world’s largest ever ivory burn. It was meant as a powerful display against poaching and the illegal ivory trade.

But did those flames reach their intended target?

Currently, governments, donors and NGOs aren’t monitoring the impact of these ivory burns. So we tracked the media coverage of the Kenyan burn, with the results published this month in Conservation Biology.

Read more: Publish and don’t perish – how to keep rare species’ data away from poachers

Who got the message?

We had a simple question in mind with this research: did news of this burn make its way to ivory consumers and elephant poachers, and if so was the message one that denounced poaching?

The answer is a bit nuanced. Certainly the news of the ivory burn was strong (loud and clear) locally in Kenya and Tanzania and heavily amplified by news outlets across the western world (81% of online articles on the burn were produced in the United States). 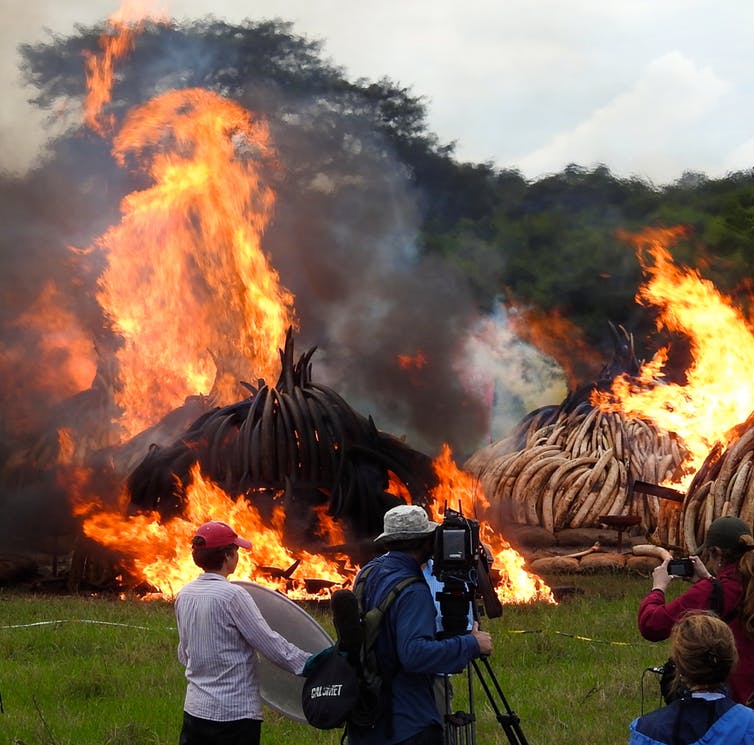 Filming the destruction of the ivory.
Daniel Stiles, Author provided

Unfortunately, we found low coverage of the burn in China, Vietnam and other countries where demand for illegal ivory is highest.

Of the 1,944 online articles that covered the burn in the countries sampled, only 61 where produced in mainland china. Additionally, more than half of the coverage in China was in English language publications, which may not reach or resonate with all key ivory consumers.

The good news is, media stories around the ivory burn delivered an anti-poaching message. They stressed the importance of burns, ivory trade bans and law enforcement to catch poachers, smugglers and dealers, as key steps to saving elephants.

To burn or not to burn?

The authors on our research paper are a group of scientists and conservationists with diverse backgrounds, across Africa, North America, Australia, Europe and Asia. Our values are as diverse as our experiences.

Most of us feel a bit of sadness because watching elephant tusks engulfed in flames is a reminder of elephant slaughter.

For some of us though, the sadness is tempered by feelings of hope and justice – this is ivory that will never go into the hands of illegal dealers and ivory consumers and, as such, acts as a major deterrent.

But for others, the response was upsetting – animals had been murdered, and to add insult to injury, their remains wasted.

In the Kenyan burn, the ivory was estimated to be worth more than US$100 million (A$128 million) on the black market.

These stockpiles of ivory are an unfortunate reality. Ivory is harvested by elephant poachers. Between 2007 and 2014 an estimated 144,000 elephants were killed. If we are lucky, these poachers are caught and their ivory confiscated. Piles of seized ivory accumulate in massive stockpiles across Africa.

So this poses a difficult situation. What should we do with all that ivory? 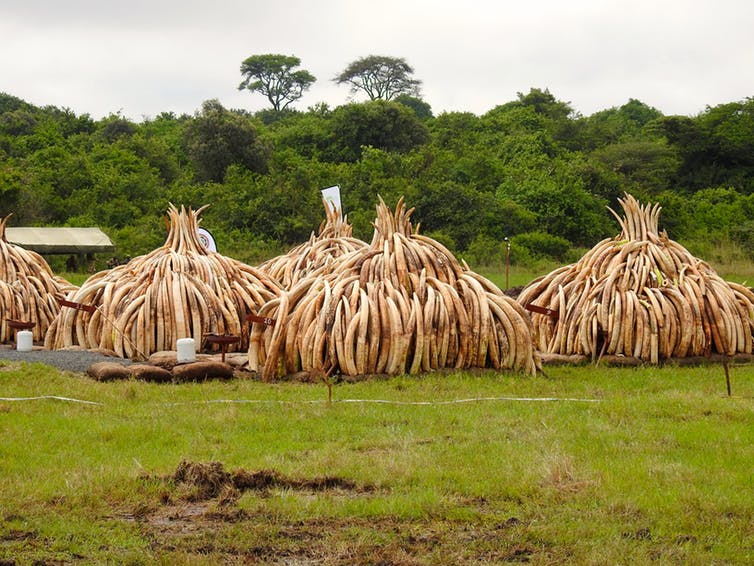 The haul of illegal ivory, before the burn. Could it be put to better use? Daniel Stiles, Author provided

We’d all, obviously, rather see ivory where it belongs, on live elephants. In an ideal world ivory would only be collected, if at all, from elephants that died from natural causes and so trade in this product would not be a problem.

But the world isn’t ideal. Even though the price of ivory has declined, elephant tusks have been known to fetch up to US$10,000 (A$12,800). With the financial incentive to poach so high, it sometimes seems like an insurmountable problem.

Some of us believe that destroying ivory sends a strong message against poaching and illegal ivory trade – by saying that ivory is only valuable on a living elephant.

These members of our group think that we might as well burn these stockpiles, to demonstrate that trade should never be supported (as it cannot be adequately policed). They are heartened by the adoption of ivory trade bans by China and the United States.

But others in the group think destroying a quantity of ivory – worth far more on the black market than Kenya’s entire annual wildlife management budget – squanders an opportunity to sell the ivory.

The money could then be used to conserve elephants and other endangered wildlife (although pro-trade proponents acknowledge that there are implementation issues regarding corruption and policing efficacy).

To these members of our group, burning the ivory would be like burning cash in front of a person with no food or shelter.

Deep down inside, we all have one common goal, to save elephants.

Rather than arguing based on our emotions, that’s why we carried out the latest research – a first step towards helping us decide whether ivory burns will reduce poaching.

Read more: Can Britain make an ivory ban work? Only if it learns from America’s experience

We need messages to be targeted towards the most important audiences, and we need to monitor consumer behaviour – not just the media coverage – in response to these events.

The scientific evidence for which action best saves elephants – burning or using regulated ivory sales to fund conservation – is still inconclusive. But as long as we move forward with ivory destruction, let’s make sure we monitor its impact.