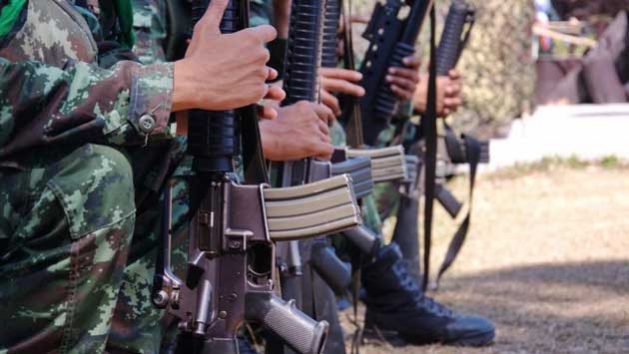 13 Mar 2018 – In most military conflicts worldwide, the ultimate winners are not one of the warring parties– but the world’s prolific arms traders, described by peace activists as “merchants of death”.

The conflicts include the six-year civil war in Syria where multiple warring factions are being armed either by the US, Russia or Iran; the three-year armed conflict in Yemen where American weapons are being used indiscriminately by Saudi Arabia, mostly against civilians; and the simmering 50-year old Israeli-Palestinian conflict which has transformed the heavily-armed Jewish state into a formidable military power described as far superior to the collective might of all the Arab states put together.

The world’s five major arms suppliers include the four permanent members of the UN Security Council (UNSC) – namely the US, Russia France and China– plus Germany (which is engaged in a longstanding battle for a permanent seat in the UNSC). Together, these five biggest exporters, have accounted for about 74 per cent of all arms exports during 2013–17

According to a new study, released March 12 by the Stockholm International Peace Research Institute (SIPRI), the world’s five major arms suppliers include the four permanent members of the UN Security Council (UNSC) – namely the US, Russia France and China– plus Germany (which is engaged in a longstanding battle for a permanent seat in the UNSC).

Together, these five biggest exporters, have accounted for about 74 per cent of all arms exports during 2013–17, according to the latest SIPRI figures.

The fifth permanent member of the UNSC, namely Britain, – which finalized an estimated $5 billion dollar arms agreement with Saudi Arabia for the sale of 48 Typhoon jet fighters last week, as reported in the Wall Street Journal March 10 — is not far behind. The proposed agreement also involves trade and investments between the two countries.

“All five permanent members of the Security Council”, ridicules one UN diplomat, “preach the doctrine of peaceful coexistence and the principles of disarmament — while having no compunctions in simultaneously selling lethal weapons in battle zones.”

‘Widespread violent conflict in the Middle East and concerns about human rights have led to political debate in Western Europe and North America about restricting arms sales,’ says Pieter Wezeman, Senior Researcher with the SIPRI Arms and Military Expenditure Programme.

“Yet the USA and European states remain the main arms exporters to the region and supplied over 98 per cent of weapons imported by Saudi Arabia,” he noted.

Wezeman told IPS the current ongoing violent conflicts in Yemen, Syria, Iraq, Sinai, Libya, Palestine, Israel, Lebanon, Turkey– and the prevalent view that military force is an important, if not the main instrument to deal with these conflicts– are major reasons for the demand for arms in the region.

In addition, he pointed out, these conflicts are closely linked to the aspirations of several states to be regional powers, in particular Saudi Arabia, the United Arab Emirates (UAE), Iran, Qatar and Turkey, which in turn, leads to deeply entrenched threat perceptions between Saudi Arabia, the UAE and Iran, and between Israel and Iran.

In addition, he said, the rapidly developed deep rift between Saudi Arabia together with the UAE, on the one hand, and Qatar on the other, shows once again how fast new tensions can develop in the region, even between states that were military allies only shortly before.

“Preparing for such unforeseen tensions is likely to be a motive for regimes in the region to modernize, or as in the case of Qatar, rapidly expand their arsenals. The fast pace of arms procurement by several countries in the region risks becoming a multi-facetted and asymmetric regional arms race,” Wezeman declared.

Arms supplying states, he noted, have shown little signs of restraint aimed at cooling off the situation. The economic, and partly, the perceived security benefits of arms exports, remain a driving force for continuing aggressive arms marketing in the region.

Such marketing, he said, also plays into other non-security or power aspirations related reasons for arms procurement, namely prestige and the opportunities that arms procurement offers for corruption

Dr. Natalie J. Goldring, Senior Fellow with the Security Studies Program in the Edmund A. Walsh School of Foreign Service at Georgetown University, told IPS “the new SIPRI data on the global arms trade represent good news for arms dealers and bad news for the rest of us.”

The new data, she pointed out, confirm a disturbing trend, with the United States widening its lead over Russia, the world’s second largest arms exporter from 2013-2017.

She said the United States retains its title as “the leading merchant of death”. US manufacturers supplied more than a third of the value of the major conventional weapons delivered around the world from 2013-2017, the period covered by this report.

“The situation isn’t likely to get better any time soon, with a report from Reuters earlier this year indicating that the Trump Administration plans to loosen controls on weapons exports and task embassy officials with being more active in pursuing sales”.

This initiative is reportedly a “Buy American” plan, which effectively treats weapons as if they were simply another consumer commodity.

“It seems clear that President Trump is going to continue the unfortunate pattern of previous administrations, exercising little control over US weapons exports. Rather than seeing the risks inherent in unfettered arms transfers, he merely seems to see dollar signs,” said Dr Goldring, who also represents the Acronym Institute at the United Nations on conventional weapons and arms trade issues.

One hopeful sign, she pointed out, is that “Congress is taking a more critical look at some US arms exports. Last summer, for example, the US Senate fell just three votes short on a resolution to block a sale of precision-guided munitions to Saudi Arabia. That more critical perspective should also be applied to sales of major conventional weapons to Saudi Arabia.”

“SIPRI reports that arms transfers to the Middle East have doubled in the last decade. If more weapons made people safer, the Middle East should be a remarkably peaceful place. The opposite seems closer to the truth, with continued conflict across the region,” Dr Goldring declared.

‘The tensions between India, on the one side, and Pakistan and China, on the other, are fuelling India’s growing demand for major weapons, which it remains unable to produce itself,’ said Wezeman.

By contrast, he said, China is becoming increasingly capable of producing its own weapons and continues to strengthen its relations with Pakistan, Bangladesh and Myanmar through arms supplies.

Asked about the driving force for arms purchases in the Middle East, Wezeman told IPS the data SIPRI collects about arms transfers for military use includes paramilitary forces, such as militarised police or so-called ‘internal security forces’, which exist in most if not all states in the Middle East, including for example, the Federal Police in Iraq and the National Guard in Saudi Arabia.

He said more or less all countries in the region are involved in armed conflicts. Many both in internal conflict and in military interventions outside their borders.

The use of heavy arms in internal conflict is common in Turkish operations against Kurdish groups; by the different groups in Syria; by US and European forces against the Islamic State (IS); by Egyptian forces in the Sinai; by Israel against Hezbollah and Hamas; and in Iraq and Yemen.

Therefore, demand for arms in the region is driven by an increased demand for weapons by all military actors. The largest deals in terms of value are usually for the regular armed forces, he added.

For example, in Saudi Arabia, the import of combat aircraft and their armaments account for the bulk of the arms imports. These aircraft are heavily used against the comparatively lightly armed Houthi rebels in Yemen, he added.

Deals for arms intended for use in internal operations, against rebel forces or even against unarmed opposition can also be substantial.

A typical example, Wezeman pointed out, is the sale of a large number of armoured vehicles made in Canada for the Saudi National Guard, worth over $10 billion.

The deal has become the subject of major debate in Canada, as critics have argued that earlier-delivered Canadian armoured vehicles were used in 2017 by the National Guard against the Shiite minority in Saudi Arabia.

Thalif Deen, a Senior Consulting Editor at Inter Press Service (IPS) news agency, has been covering the United Nations since the late 1970s. Beginning with the Earth Summit in Rio de Janeiro in 1992, he has covered virtually every major U.N. conference: on population, human rights, the environment, social and economic development, food security, humanitarian aid, nuclear disarmament, water, energy and education. As the former UN Bureau Chief for Inter Press Service, he was cited twice for excellence in U.N. reporting at the annual awards presentation of the U.N. Correspondents’ Association (UNCA). In November 2012, he was on the IPS team which won the prestigious gold medal for reporting on the global environment– and in 2013, he shared the gold, this time with the UN Bureau Chief of Reuters news agency, for his reporting on the humanitarian and development work of the United Nations. A former information officer at the U.N. Secretariat, he served twice as a member of the Sri Lanka delegation to the UN General Assembly sessions. His track record includes a stint as deputy news editor of the Sri Lanka Daily News and senior editorial writer on the Hong Kong Standard. A former military editor Middle East/Africa at Jane’s Information Group, a columnist for the Sri Lanka Sunday Times and a longtime U.N. correspondent for Asiaweek, Hong Kong and Jane’s Defence Weekly, London, he is a Fulbright scholar with a Master’s Degree in journalism from Columbia University, New York. He can be contacted at thalifdeen@ips.org