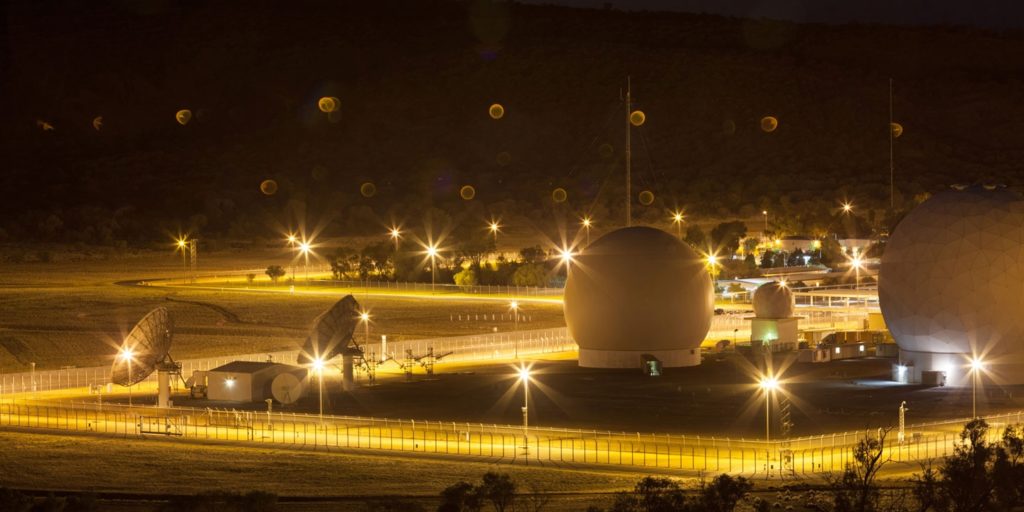 1 Mar 2018 – It is one of the world’s most powerful alliances. And yet most people have probably never heard of it, because its existence is a closely guarded government secret.

The “SIGINT Seniors” is a spy agency coalition that meets annually to collaborate on global security issues. It has two divisions, each focusing on different parts of the world: SIGINT Seniors Europe and SIGINT Seniors Pacific. Both are led by the U.S. National Security Agency, and together they include representatives from at least 17 other countries. Members of the group are from spy agencies that eavesdrop on communications – a practice known as “signals intelligence,” or SIGINT.

Details about the meetings of the SIGINT Seniors are disclosed in a batch of classified documents from the NSA’s internal newsletter SIDToday, provided by whistleblower Edward Snowden and published today by The Intercept. The documents shine light on the secret history of the coalition, the issues that the participating agencies have focused on in recent years, and the systems that allow allied countries to share sensitive surveillance data with each other.

The SIGINT Seniors Europe was formed in 1982, amid the Cold War. Back then, the alliance had nine members, whose primary focus was on uncovering information about the Soviet Union’s military. Following the attacks on the U.S. in September 2001, the group grew to 14 and began focusing its efforts on counterterrorism.

The core participants of the Seniors Europe are the surveillance agencies from the so-called Five Eyes: the NSA and its counterparts from the U.K., Australia, Canada, and New Zealand. As of April 2013, the other members were intelligence agencies from Belgium, Denmark, France, Germany, Italy, the Netherlands, Norway, Spain, and Sweden.

The alliance – which the NSA sometimes refers to as the “14 Eyes” – has collaborated to monitor communications during major European events, such as the Olympics in 2004 (hosted in Greece), the Winter Olympics in 2006 (hosted in Italy), and the soccer World Cup in summer 2006 (hosted in Germany). Between 2006 and 2007, as part of a counterterrorism operation, the agencies began working on “exploitation of the Internet,” which was described by the NSA as a “huge step forward” for the group, because some members of the alliance had previously been “reluctant to acknowledge there was such a thing as the Internet.” 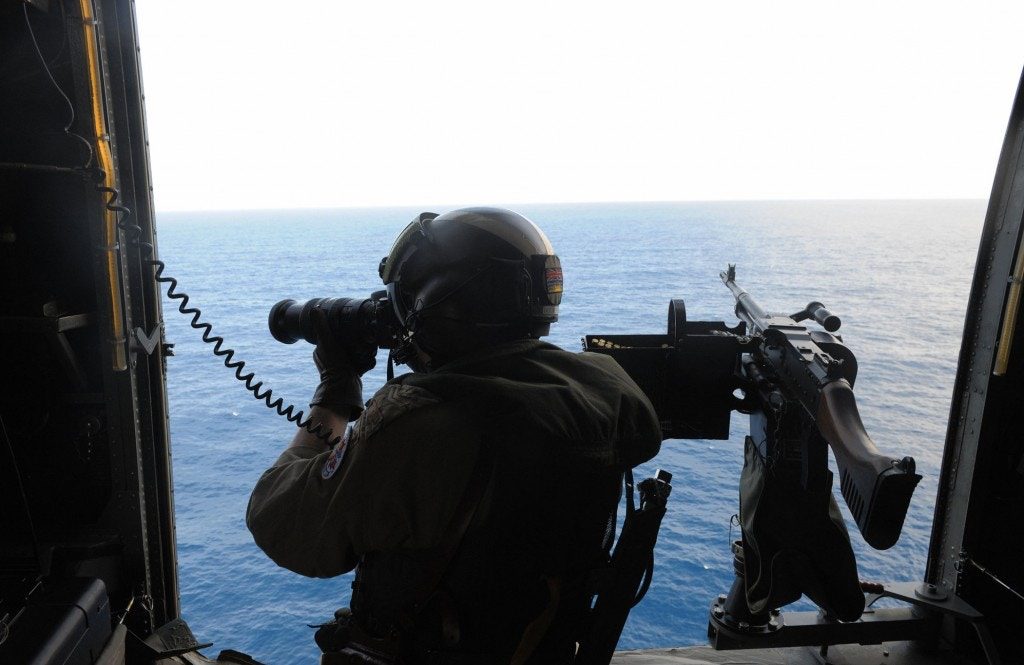 A Canadian Navy sailor on board a helicopter patrols the waters off the coast of Somalia as they escort a World Food Program ship on Sept. 17, 2008, providing an anti-pirate escort for the ship taking food aid to Somalia.
Photo: Simon Maina/AFP/Getty Images

As of 2010, the agencies were focused on targeting suspected terrorists, sharing intelligence related to piracy in the Horn of Africa, and they were collaborating on the development of new surveillance tools and techniques. According to the documents, the Seniors Europe had its own dedicated communication network called SIGDASYS, through which each agency can share copies of intercepted communications. The group also used a system called CENTER ICE to share intelligence about the war in Afghanistan.

The documents indicate that the Seniors Europe hold an annual conference, each time in a different location. In 2013, for instance, the group gathered in Sweden; in 2011, it met in the U.K; in 2010, in Germany; and in 2009, in Canada. In 2013, the NSA expressed an interest in creating a permanent facility that would host representatives from the Seniors Europe in a joint collaborative space. The NSA discussed the idea with its U.K. counterpart, Government Communications Headquarters, or GCHQ. The British were “all in” on the proposal, according to the NSA. However, from some unnamed members of the SIGINT Seniors, there was “persistent pushback” on the plan.

The NSA thought the facility would be best hosted in the U.K., as this would “be optimal in terms of having the most flexibility in tuning the operation to benefit the Five Eyes.” The agency also suggested the idea of France potentially hosting the unit, but outlined its reservations about setting up the spy hub in continental Europe. “Some European nations may be leery about hosting a facility in their nation,” the NSA noted, partly due to “associated concerns for European human rights laws.” (Both NSA and its British counterpart, GCHQ, declined to answer questions for this story. GCHQ issued a statement asserting that it adheres to “a strict legal and policy framework, which ensures that our activities are authorised, necessary and proportionate.”)

The Pacific division of the SIGINT Seniors is younger than the European branch. The NSA formed it in 2005, with the aim of “establishing a collaborative effort to fight terrorism in the Asia-Pacific region.” In March 2007, the NSA said that it was in the process of “raising ideas for expanding [SIGINT Seniors Pacific’s] intelligence focus beyond counterterrorism.”

The NSA was passing the Indians selected top-secret material, and India began leaking some of the intelligence.

The founder members of the Pacific alliance were the spy agencies from the Five Eyes, as well as South Korea, Singapore, and Thailand. By 2013, France and India had joined the Pacific group. The NSA was particularly keen on having India on board as part of a broader U.S. government effort to improve relations with the country, and “felt strongly that India’s participation in multilateral intelligence sharing would help mature its Indian SIGINT agencies as well as provide regional [counterterrorism] expertise.” In March 2008, then-NSA Director Gen. Keith Alexander led a delegation of officials – including representatives from Singapore and New Zealand – to New Delhi, where he asked India’s spy agencies if they would like to join forces. Three months later, the Indians accepted.

The Pacific group used a system called CRUSHED ICE to share information. According to an NSA document dated from November 2007, CRUSHED ICE is a secure network that enables sharing of secret intelligence, collected from intercepted communications, about counterterrorism. “The system allows for collaboration by way of voice, binary-file/email exchanges, analysis and reporting, graphics and mapping, communities of interest, collection management, and other applications as needed,” the November 2007 document stated.

For the countries invited to participate in the SIGINT Seniors, there are obvious benefits. They can learn new surveillance techniques from the world’s most powerful spy agencies and at the same time, obtain information about their own countries or regions that they otherwise may have been unable to access. But not all nations who have been invited to join the alliance have jumped on board. According to an NSA document from March 2007, Japan refused to sign up to the Pacific group, expressing concerns that “unintended disclosure of its participation would be too high a risk.”

A downside of SIGINT Seniors is the risk that a partner will mishandle sensitive information. This happened on at least one occasion with India. By the time terrorists had struck Mumbai in a series of attacks in November 2008, the country had been admitted to the Pacific group. The NSA was passing the Indians selected top-secret material, such as interrogation reports and recordings of intercepted phone calls. In the weeks following the Mumbai incident, India began leaking some of the intelligence — “at times it seemed a daily occurrence,” the NSA’s country desk officer complained. The NSA limited the provisioning of top-secret information to India after repeated warnings and meetings left it dissatisfied. Still, the NSA, which had deployed analysts to India, remained hopeful Indian intelligence agencies would “mature … into the partners NSA needs in South Asia.”

The SIGINT Seniors likely remains active today and has probably grown its capabilities in recent years. According to the 2013 “black budget” – a portion of the U.S. federal budget dedicated to secret intelligence-gathering work – the NSA was that year working to bolster both the European and Pacific branches of the SIGINT Seniors, and planned to “expand the level of cooperation on [counterterrorism] and explore other potential areas of collaboration.”