No money for teacher pay or textbooks, but…

18 Apr 2018 – Across the United States, workers are being told by Democrats and Republicans alike that there is “no money” for decent wages, pensions or health care. Teachers from West Virginia to Oklahoma, Kentucky, Arizona and other states are rebelling against near-poverty wages and years of school cuts only to be told by the politicians and union leaders that their demands are “unrealistic” and cannot be met.

But a series of reports on CEO pay, bank profits and corporate cash released over the past week reveal that corporate America and the financial oligarchy are wallowing in record levels of wealth. The Washington Post reported on Friday that, boosted by the tax cut for corporations and the rich passed in December, the biggest US firms “find themselves sitting on an Everest of cash,” with “profits pouring in faster than they can find productive ways to spend it.”

The windfall from the Trump tax cut, passed with no serious opposition from the Democrats, is not, contrary to the lies used to justify the law, going to create new, good-paying jobs and rebuild the country’s crumbing infrastructure. It is being used for stock buybacks, a parasitic squandering of the wealth produced by the labor of the working class to drive up stock prices and the portfolios of rich investors and corporate executives.

In February alone, US corporations announced a single-month record $150.7 billion in buybacks. They are expected to hit a new yearly record in 2018, surpassing the previous record of $589 billion set in 2007, the year before the Wall Street crash. Over the past 10 years, the American capitalist class has spent $5.1 trillion in stock buybacks.

To put this in perspective, the Oklahoma teachers, among the lowest-paid in the country, demanded $200 million in additional school funding to begin to address a decade of brutal cuts. The state government agreed to a mere $50 million, which the Oklahoma Education Association hailed as a “victory.”

The amount requested by the teachers represents a mere 0.01 percent of the cash being hoarded by US corporations. 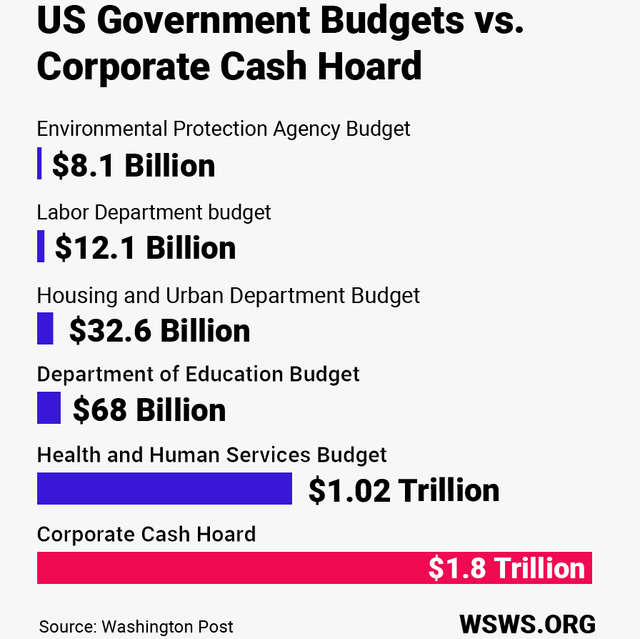 These reports, taken together, give a picture of a society that is being ruthlessly plundered by an unaccountable and avaricious financial oligarchy. The waste of resources and diversion of social wealth into the hands of a fabulously rich elite make it impossible to address any of the social problems confronting the population.

The other major squandering of resources is in the form of ever-expanding spending on the military and the preparations of the US ruling class for global war.

On April 11, Equilar published its annual “Equilar 100” report, which examines CEO compensation at the 100 largest companies, by revenue. The study showed that median compensation for the 100 CEOs rose by 5 percent in 2017 from the previous year to reach an 11-year high of $15.7 million.

The median ratio of Equilar 100 CEO pay to that of a worker at the given company was 235 to one. However, some companies on the list had ratios even worse than the median. Manpower Group, whose CEO received $12 million, reported the highest ratio at 2,483 to one. The median pay of the company’s 600,000 workers was $4,828. The retail chain Kohl’s had a ratio of 1,264 to one. 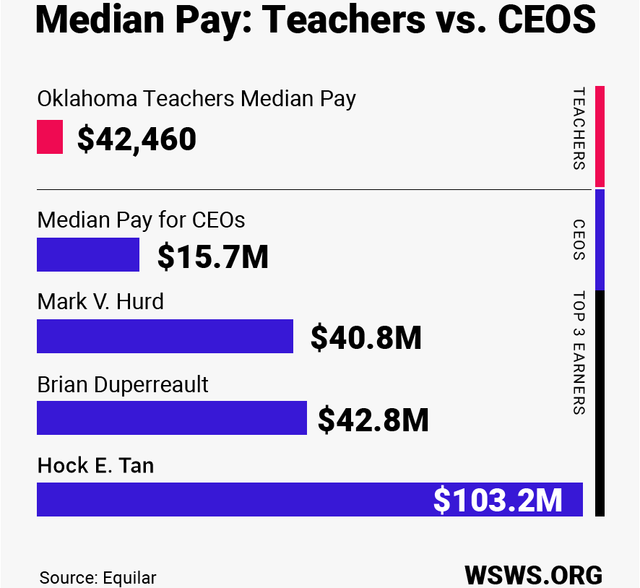 The second-highest paid CEO, Brian Duperreault ($42.8 million), heads the insurance giant American International Group (IAG), whose speculation in subprime mortgage-backed securities and credit default swaps played a central role in the financial crisis a decade ago that destroyed the savings and livelihoods of millions of people around the world and ushered in the Great Recession. His firm was bailed out by the Federal Reserve and the US Treasury to the tune of $150 billion.

Over the past week the major Wall Street banks have reported record or near-record profits for the first quarter of 2018. On Friday, JPMorgan Chase, Citigroup and Wells Fargo reported a combined profit of more than $19 billion for the first three months of the year.

JPMorgan, the country’s biggest bank, reported a record quarterly net income of $8.71 billion. Its profits rose 35 percent over the same period a year ago. Earlier this month, CEO Jamie Dimon issued a letter to shareholders warning of rising wages and advising the Federal Reserve to jack up interest rates in order to stunt economic growth and drive up unemployment, so as to preempt the development of a nationwide wages movement.

It was a similar story at Citigroup (13 percent profit rise) and Wells Fargo (8 percent). Bank of America on Monday reported a 34 percent profit increase and Goldman Sachs on Tuesday said its profits jumped 26 percent.

A substantial part of the profit surge on Wall Street was due to the massive cut in the corporate tax rate. The five banks combined saved well above $2 billion as a result of a drastic reduction in their effective tax rates.

Speaking of the windfall from the tax law and other policies being implemented by Trump, with the tacit support of the Democrats, Citigroup Chief Financial Officer John Gerspach told reporters Friday that companies had only begun to take advantage of the changes. “I think the best is yet to come,” he said.

Putting an end to social inequality and the capitalist system that produces it are essential to providing employment, education, health care, housing, a comfortable retirement, access to culture, a safe environment and a modern infrastructure—that is, securing the basic social rights of the working class.