Death of the New Republic: White-collar criminals in Brasília are ruling the country. Drug lords, paramilitaries, death squads, military police, and now also the army are terrorizing the population in the slums and the suburbs. 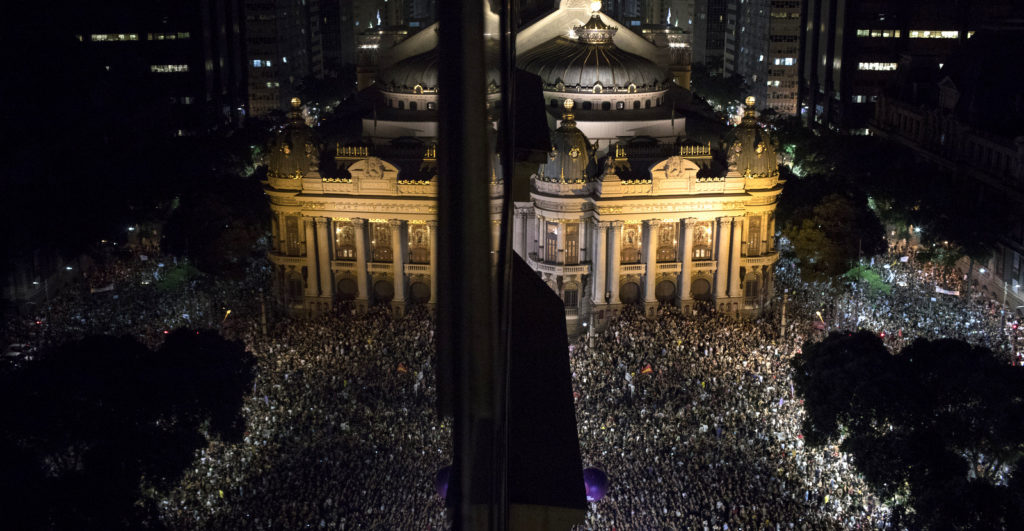 Thousands gather in front the Municipal Theater in downtown Rio de Janeiro, during a protest against the death of councilwoman Marielle Franco, who was gunned down the night before by two unidentified attackers in Rio de Janeiro, Brazil, March 15, 2018. Police said the 38-year-old councilor, who was known for her social work in slums, was killed by perpetrators who knew exactly where she was sitting in a car that had blackout windows. (AP/Leo Correa)

28 Mar 2018 – Marielle was a child of the slums of Rio de Janeiro. She was black, beautiful, young and charismatic. She studied sociology and had an MA in public administration. She was a feminist, LGBT+, Black and human rights activist. Elected on a progressive agenda, she was an active councilwoman of the city of Rio de Janeiro since 2016. She was assassinated on the 14th. of March. Four bullets from a 9-millimeter gun transpierced her body. They also killed Anderson Pedro Gomes, her driver.

It was a political assassination. Probably perpetrated by the military police or the paramilitary squads, or both, because the police officer who intervenes in the slums against the drug lords during the day can be active as militiaman during the night. The message from the overlords of the underworld was loud and clear. Don´t mess with us! Whoever stands up from or for the people from the periphery and the slums to denounce the violations of human rights will be killed, tortured or “disappeared”.

The shots backfired, however. The nation was shocked. Overnight Marielle became a symbol of resistance and an icon of hope. Black lives matter. Every time and everywhere someone is murdered for being black, gay, female or from the slums, every time human rights are violated, Marielle is present.

Marielle Franco represented the new generation of politics, over and against the old, corrupt system of crony capitalism and oligarchic patrimonialism that is collapsing in real time. In 2016, Dilma Rousseff, the president elect of the Workers Party (PT), was ousted by impeachment. We call it a coup or a putsch, because even if the impeachment occurred in accordance with the letter of the law, the power grasp by the vice president Michel Temer fatally wounded the spirit of the constitution of 1988. In retrospect, we can see that the impeachment was only the opening salvo of an ongoing coup.

Everything indicates that the removal of the president-elect happened to try to stop judicial and criminal inquiries into systemic corruption at the highest level. The president himself has been accused of passive corruption, money laundering and gang formation. If he’s not been impeached, it is only because the already corrupt upper and lower houses were bought off.

What is harder to understand, however, is why the illegitimate government has abolished the ministry of culture, the ministry of small farmers, the secretaries of human rights, racial equality and women’s affairs.

Why has it pushed through the toughest programme of austerity in Latin America (with cuts inscribed in the Constitution for the next 20 years)? Why have they unrelentingly implemented a strain of neo-liberal reforms that destroy the welfare state and sold off the assets of the state through privatization?  Why have they aligned themselves with the most reactionary forces on the countryside and systematically defended the interest of the big landowners against small farmers, indigenous people and free slave communities? Why have they given voice to fundamentalist Christians, the extreme right, racists and homophobes? 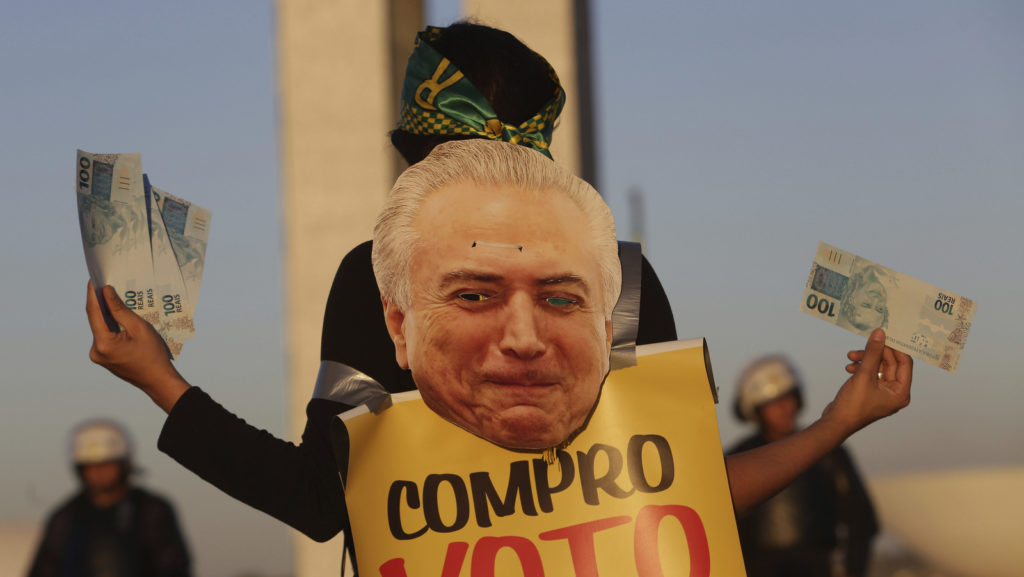 In this Aug. 2, 2017 photo, a woman holds fake Brazilian bank notes wearing a human billboard composed of an image of President Michel Temer with a message that reads in Portuguese: “I buy votes,” during a protest outside Congress in Brasilia, Brazil. (AP/Eraldo Peres)

The answer to these questions is probably that with an approval rate below 5 %, President Temer had nothing to lose. In Brazil, we’ve now reached the stage of mafia politics. White-collar criminals in Brasília are ruling the country. Drug lords, paramilitaries, death squads, military police, and now also the army are terrorizing the population in the slums and the suburbs. The statistics are appalling. With almost 60.000 assassinations per year, Brazil is a more violent country than Iraq!

The assassination of Marielle coincides with the creation of a Ministry of Public Security and a federal intervention of the national army in the state of Rio de Janeiro. In a posthumously published op-ed, Marielle connected the dots. There’s a military intervention because 2018 is an election year. As always, and especially when the extreme right is on the ascendance, security trumps freedom, democracy and human rights.

In a country that has suffered a brutal dictatorship from 1964 till 1985, the militarization of politics is rather worrisome. For the first time since the return of democracy, military men are now in charge of the ministry of defense, the ministry of the interior, the secret services and the office of indigenous affairs. Soldiers who commit crimes during their military operations in Rio de Janeiro will no longer be subject to civil courts; by decree, they will be judged by military courts.

The “new republic” is still a democracy, but for how long? Our institutions are collapsing one by one. The separation between the executive, the legislative and the judicial powers is a sham. There’s a state within the state. Since last year, the state of Rio de Janeiro is officially in a “state of calamity”. We’re dangerously advancing towards a state of emergency.

The execution of Marielle should not be used as a pretext to further militarization. From now onwards till the full reestablishment of democracy in Brazil, the question that Marielle asked when she denounced the killing of one more youngster from the slums by the military police when he left the Church will also be ours: “How many more people will have to die to stop this war?”

Frédéric Vandenberghe is a professor of sociology, at the State University of Rio de Janeiro.