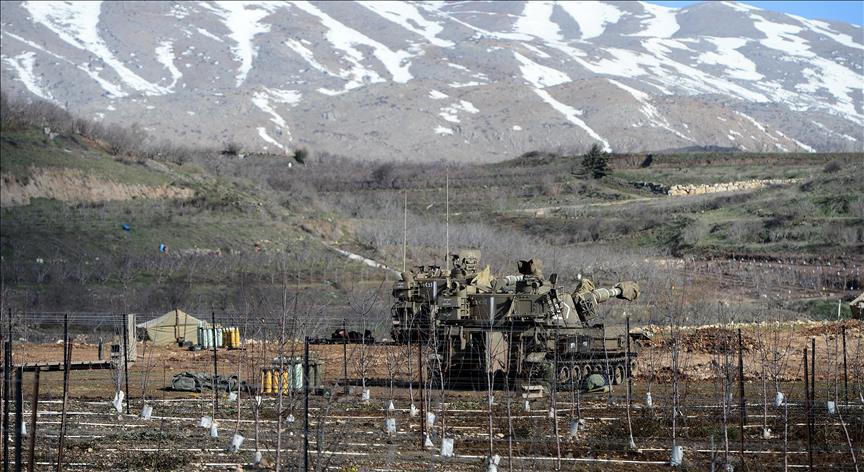 The majority of the Syrian population in the territory was then either expelled, or fled towards safety. Israel demolished their homes, buildings and entire villages in the Golan in order to build Jewish settlements where they once stood.

In 1981, in defiance of the United Nations and international law, Israel annexed the Golan Heights. This move – unrecognised even by Israel’s allies – was intended to solidify Israel’s de facto control of the occupied Syrian territory, giving it a gloss of legalistic self-recognition. What’s more, over the past few years Israel has used the cover of the long-running and bloody war in Syria to expand its control of the Golan, far into the rest of the south of its neighbour’s sovereign territory; it wants as much control as possible.

That summer we learned that Israel was supporting a “border force” rebel group between the Golan and the rest of Syria to the tune of tens of thousands of dollars. In the years prior to that, Israel had worked to support Al-Qaeda-linked groups in the south of Syria. This support took the form of treating wounded fighters in Israeli hospitals across the border, before sending them back to Syria to fight the regime.

The latest news is that Israel’s arming of proxy forces in Syria seems to be escalating. A report in Tel Aviv newspaper Haaretz last week stated that Israel is now arming “at least” seven rebel groups in the Golan, which are “getting arms and ammunition from Israel, along with money to buy additional armaments.”

The groups in question all report a recent increase in Israeli aid. This comes in the wake of various states, including Jordan and the US, scaling down their armament operations in Syria. As Haaretz reported, “In January, the Trump administration closed the operations centre the CIA ran in Amman, the Jordanian capital, which coordinated aid to rebel organisations in southern Syria. As a result, tens of thousands of rebels who received regular economic support from the US have been bereft of this support.”

The Israeli aim here seems to be twofold. First of all, it is to keep the armed forces of Iran and Hezbollah – the Syrian regime’s allies – away from the boundary line of the Golan. The quickest way to do this is to make sure that there is a feasible armed opposition in that area.

Read: Israel will never go to war with Syria or Iran

Secondly, Israel’s arms proliferation programme is intended to promote its official strategic objective in the region; to “let both sides bleed” in order to prolong the war for as long as possible. Weakening Syria and its allies, Lebanon’s Hezbollah and Iran, is an important goal for Israel and its superpower backer, the United States. Even more important is the goal of making sure that the war carries on.

All of this is in addition to the general Israeli goal of controlling the maximum amount of land that it can grab and keep. The buffer zone that Israel is stealthily attempting to extend as much as 40 kilometres further into Syria is being achieved through front groups posing as supposedly “non-governmental” aid organisations, as well as covering the salaries of rebel fighters and sending funding to buy arms.

These bogus “civil society aid” groups backed by Israel in the south of Syria – extending its Golan occupation – are a front. In reality, they are a way to extend Israeli proxy control throughout the region.

All of this is very much out of the Israeli play book in Lebanon. Between 1982 and 2000, Israel illegally occupied the south of Lebanon. After the 1982 invasion — which reached as far as Beirut — Israel withdrew to a “buffer” zone in southern Lebanon. Instead of occupying the zone with Israeli soldiers, much of the work was handled by Lebanese proxy forces. These puppet armed groups oppressed the population on behalf of Israel. This soon led to armed resistance to the Israeli occupation, and it was in this environment that Hezbollah was born.

Israel illegally occupied the south of Lebanon until 2000, when the resistance led by Hezbollah drove out the main Israeli proxy, the so-called South Lebanon Army. Today, Israel is attempting to establish what is, in all but name, a “South Syria Army”. Whether it succeeds is questionable but, as the history of Lebanon shows, even if it does, Israel is unlikely to maintain control in the long run.

Asa Winstanley is an investigative journalist living in London who writes about Palestine and the Middle East. He has been visiting Palestine since 2004 and is originally from south Wales. He writes for the award-winning Palestinian news site The Electronic Intifada where he is an associate editor and also a weekly column for the Middle East Monitor.