Media spin will continue to provide Israel with the needed margins to carry out its violent policies against the Palestinian people, with no moral accountability. 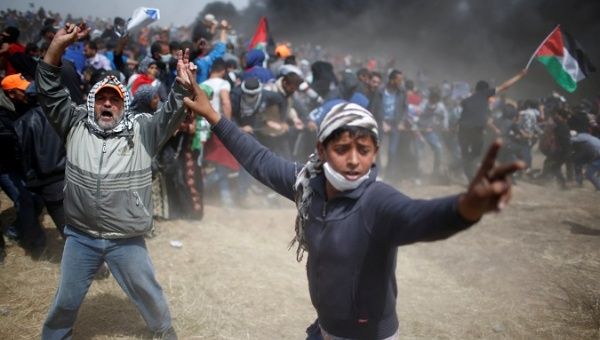 Palestinians gesture as they remove part of the Israeli barbed wire during a protest demanding the right to return to their homeland, at the Israel-Gaza border. | Photo: Reuters

17 Apr 2018 – The term ‘media bias’ does not do justice to the western corporate media’s relationship with Israel and Palestine. The relationship is, indeed, far more profound than mere partiality. It is not ignorance, either. It is a calculated and long-term campaign, aimed at guarding Israel and demonizing Palestinians.

The current disgraceful coverage of Gaza’s popular protests indicates that the media’s position aims at suppressing the truth on Palestine, at any cost and by any means.

Political symbiosis, cultural affinity, Hollywood, the outreaching influence of pro-Israel and Zionist groups within the political and media circles, are some of the explanations many of us have offered as to why Israel is often viewed with sympathetic eyes and Palestinians and Arabs condemned.

But such explanations should hardly suffice. Nowadays, there are numerous media outlets that are trying to offset some of the imbalance, many of them emanating from the Middle East, but also other parts of the world. Palestinian and Arab journalists, intellectuals and cultural representatives are more present on a global stage than ever before and are more than capable of facing off, if not defeating, the pro-Israeli media discourse.

However, they are largely invisible to western media; it is the Israeli spokesperson who continues to occupy the center stage, speaking, shouting, theorizing and demonizing as he pleases.

It is, then, not a matter of media ignorance, but policy.

Even before March 30, when scores of Palestinians in Gaza were killed and thousands wounded, the U.S. and British media, for example, should have, at least, questioned why hundreds of Israeli snipers and army tanks were ordered to deploy at the Gaza border to face-off Palestinian protesters.

Instead, they referred to ‘clashes’ between Gaza youth and the snipers, as if they are equal forces in an equivalent battle.

Western media is not blind. If ordinary people are increasingly able to see the truth regarding the situation in Palestine, experienced western journalists cannot possibly be blind to the truth. They know, but they choose to remain silent.

The maxim that official Israeli propaganda or ‘hasbara’ is too savvy no longer suffices. In fact, it is hardly true.

Where is the ingenuity in the way the Israeli army explained the killing of unarmed Palestinians in Gaza?

“Yesterday we saw 30,000 people,” the Israeli army tweeted on March 31. “We arrived prepared and with precise reinforcements. Nothing was carried out uncontrolled; everything was accurate and measured, and we know where every bullet landed.”

If that is not bad enough, Israel’s ultra-nationalist Minister of Defense, Avigdor Lieberman, followed that self-indictment by declaring there are “no innocent people in Gaza”; thus, legitimizing the targeting of any Gazan within the besieged Strip.

Unfair media coverage is not fueled by the simplistic notion of ‘clever Israel, imprudent Arabs’. Western media is actively involved in shielding Israel and enhancing its diminishing brand, while painstakingly demolishing the image of Israel’s enemies.

Take for example, Israel’s unfounded propaganda that Yasser Murtaja, the Gaza journalist who was killed in cold blood by an Israeli sniper while covering the Great March of Return protests at the Gaza border, was a member of Hamas.

First, ‘unnamed officials’ in Israel claimed that Yasser is ‘a member of the Hamas security apparatus.’ Then, Lieberman offered more (fabricated) details that Yasser was on Hamas’ payroll since 2011 and ‘held a rank similar to a captain.’ Many journalists took these statements and ran with them, constantly associating any news coverage of Yasser’s death with Hamas.

It turned out that, according to the U.S. State Department, Yasser’s start-up media company in Gaza had actually received a small grant from USAID, which subjected Yasser’s company to a rigorous vetting process.

More still, a report by the International Federation of Journalist claimed that Yasser was actually detained and beaten by the Gaza police in 2015, and that Israel’s Defense Minister is engineering a cover-up.

Judging by this, Israel’s media apparatus is as erratic and self-defeating as North Korea; but this is hardly the image conveyed by western media, because it insists on placing Israel on a moral pedestal while misrepresenting Palestinians, regardless of the circumstances.

But there is more to western media’s approach to Palestine and Israel than shielding and elevating Israel, while demonizing Palestinians. Oftentimes, the media works to distract from the issues altogether, as is the case in Britain today, where Israel’s image is rapidly deteriorating.

To disrupt the conversation on Palestine, the Israeli Occupation and the British government’s unconditional support of Israel, British mainstream media has turned the heat on Jeremy Corbyn, the popular leader of the Labor Party.

Accusations of anti-Semitism has dogged the party since Corbyn’s election in 2015. Yet, Corbyn is not racist; on the contrary, he has stood against racism, for the working class and other disadvantaged groups. His strong pro-Palestine stance, in particular, is threatening to compel a paradigm shift on Palestine and Israel within the revived and energized Labor Party.

Sadly, Corbyn’s counter strategy is almost entirely absent. Instead of issuing a statement condemning all forms of racism and moving on to deal with the urgent issues at hand, including that of Palestine, he allows his detractors to determine the nature of the discussion, if not the whole discourse. He is now trapped in a perpetual conversation, while the Labor Party is regularly purging its own members for alleged anti-Semitism.

Considering that Israel and its allies in the media, and elsewhere, conflate between criticism of Israel and its Zionist ideology, on the one hand, and that of Jews and Judaism on the other, Corbyn cannot win this battle.

Nor are Israel’s friends keen on winning, either. They merely want to prolong a futile debate so that British society remains embroiled in distractions and spares Israel any accountability for its action.

If British media was, indeed, keen on calling out racism and isolating racists, why then is there little discussion on Israel’s racist policies targeting Palestinians?

Media spin will continue to provide Israel with the needed margins to carry out its violent policies against the Palestinian people, with no moral accountability. It will remain loyal to Israel, creating a buffer between the truth and its audiences.

It is incumbent on us to expose this sinister relationship and hold mainstream media to account for covering up Israel’s crimes, as well as Israel for committing these crimes in the first place.