Russian Exodus from the West 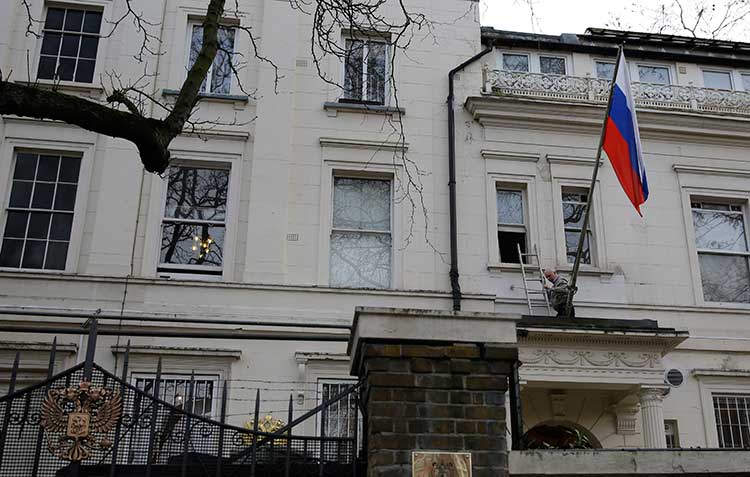 31 Mar 2018 – By now the West – the US, Canada, Australia and the super-puppets of Europe, overall more than 25 countries – has expelled more than 130 Russian diplomats. All as punishment for Russia’s alleged nerve gas poisoning of a former Russian / MI6 double-agent, Sergei Skripal (66) and his daughter Yulia (33), who was visiting her father from Moscow. Sergei Skripal lived in the UK for the last seven years, ever since President Putin lifted his prison sentence in 2010 in a spy swap with the UK. The pair, father and daughter, was allegedly discovered on 4 March slumped on a park bench in Salisbury, England, not far from Sergei’s home. Apparently traces of the same nerve agent were found at the Skripal home’s door.

Russia in the meantime has started in a tit-for-tat move expelling western diplomats – in a first round 60, plus closing the US Consulate in St. Petersburg. According to Mr. Lavrov, more will most likely follow. – There will be an exodus and a counter-exodus of diplomats, west-east and east-west. It looks like a Kindergarten at play – but is of course a blatant provocation by the west on Russia and a continuation of the vilification of President Putin – especially after he has just been reelected with an overwhelming majority of over 76%. It’s a provocation with zero substance, to further justify an escalating NATO aggression against Russia. The war-bells are ringing – for a lie, an abject farce, visible to a child. Only the blind, those puppets, because out of fear or out of stupidity, who do not want to see – are supporting this new US instigated, UK executed drive against Russia.

The nerve gas, called Novichok, had been produced by the Soviet Union in the 1970s, but was subsequently banned and destroyed under international supervision. The ‘inventor’ of Novichok lives apparently in the US. Mr. Putin said, if the military-grade Novichok would have been used, the only form the USSR ever produced, there would have been no survivors.

What hardly anybody talks about is that the secretive UK Defense (War) Ministry’s laboratory of Porton Down, is but 13 km away from where father and daughter were allegedly found unconscious on a park bench. Porton Down is a highly sophisticated chemical and biological weapons lab that entertains contracts with the Pentagon of more than US$ 70 million for carrying out “experiments”, including on humans and animals. Porton Down has the capacity to produce Novichok. See the full story on Porton Down, by Bulgarian investigative journalist, Dilyana Gaytandzhieva – https://southfront.org/salisbury-nerve-agent-attack-reveals-70-million-pentagon-program-porton/ .

At this point there is no prove – other than what the police reported – that Sergei and Yulia Skripal were found on that dubious park bench. There are no civil witnesses. The UK government does not disclose where the two are treated, what their current health status is. Only on the repeated insistence of Mr. Lavrov that according to an agreement between the UK and Russia (the USSR) in the 1960s, both countries have the right to inquire and investigate about the wellbeing of their respective citizens, an official statement on 29 March from the UK said that Yulia is doing better and is on her way to recovery, while her father is still in critical but stable conditions (The Guardian, 29 March 2018). Is it true? – What if one or both recover and have enough memory of the events to go public?

What if the two have indeed been poisoned at Sergei’s home, or abducted and brought to the Porton Down laboratory to be infected with the nerve gas and then later dumped to the park bench? Why does the UK not disclose any ‘evidence’ they apparently have against Russia? – No details of where the two are being treated? – No visits allowed. Russia’s offer to collaborate in the investigation is laughed off and refused. Is this a well-orchestrated MI6 / CIA false flag, followed by outrageous lambasting by the UK’s highest leadership against Russia and her newly re-elected President Putin?

This criminal propaganda event is so full of lies, false accusations and deceit, pulling along more than 25 (so far) western nations to condemn and sanction Russia in unison for something Russia has with absolute certainty not committed. Just apply logic – a tough challenge, I know, these days for the dumb-folded west – but logic would tell a child that there is no sense, absolutely no sense, for Russia to carry out such an evil act. So, the usual question is: cui bono – who benefits? – And the answer is also crystal clear: Profiting from this sham are the war-mongering US / NATO and their miserable vassal-allies – spineless for years – following lies, their governments are fully aware of the lies, of the untruth Russia is accused of.

Adding injury to insult is Ecuador’s new President, Lenin Moreno, who a few days ago has shut up Julian Assange, Wikileaks editor, who is in political asylum in the Ecuadorian Embassy in London since July 2012. Under Moreno’s gag-order, Assange is no longer allowed to communicate with anybody in any form and shape and cannot receive visitors. The official reason for Moreno – who has clearly become a traitor on his people – is that Assange tweeted a protest against the arrest in Germany of Catalonian ex-leader, Carles Puigdemont. Moreno has condemned Assange to a sort of isolation prison in the Ecuadorian Embassy. Who gave Moreno orders to do so? – Well, I leave the guessing up to you. In any case Moreno has become a prostitute as are most of the western world “leaders”.

The real reason is most likely Assange’s strong critique of the UK government, especially PM Teresa May and her Foreign and Defense Ministers, for their vitriolic and unjustified accusations and slandering of Russia and particularly of President Putin in the Skripal poison case. Assange cannot leave the embassy for fear of being arrested and extradited to the US, where he may face torture and worse, possibly the death penalty.

Let’s take this a step further. Diplomatic relations between the west and Russia have totally fallen apart. The doors are closed. Russia doesn’t need the west. But the west, especially Europe, badly needs and will every day more need Russia, a close ally and trading partner for hundreds of years. The west, eventually abandoned and every day more enslaved by Washington with weaponized refugees, with false flag terror attacks, leading to increased militarization, to oppression and censorship, privatization of public goods and infrastructure – Greece is but an example – and strangulation by Wall Street private banking and troika (IMF, European Central Bank, European Commission) imposed debt, the west will beg Russia to open her doors and show them her kindness – the kindness and openness Russia has been demonstrating to the west over the past almost 20 years, despite flagrant western abuse and demonization no end.

The western Anglo-Zionist-led empire will collapse. It’s a mere question of time but collapse it will. Today, not only a few, but all western “leaders” (sic) know that they are committing suicide by teaming up with destructive Washington – and this against the will of the majority of the European people. – Yet, they push a long this path of auto-destruction. Why? – Have they been personally threatened, or else lavishly rewarded if they follow the dictate of deep state-led White House and Pentagon?

The day may come when the west will knock desperately at Russia’s door – please talk to us, we need you. But this may happen only if they have not let themselves be pulled into the abyss of annihilation by Washington. Their stupidity may just do that – another few lies, accusing Russia of crimes against humanity she didn’t commit and prompting a war, an all-destructive nuclear war. The pretext could be another false flag Syrian sarin attack on “her own people”, wrongly blaming Bashar al-Assad; or a missile landing in Israel, blaming Iran with the same no-proof propaganda fervor applied by the UK in the Sergei and Yulia Skripal case; or North Korea – in the course of negotiations between Trump and Kim Jong-un next month (April), the US / west launches a false flag missile, for example, from Guam, that lands in Japan, destroying infrastructure and killing people, blaming it immediately on DPRK, without any evidence whatsoever, but with a rigorous campaign UK-style, to the point that nobody dares to contradict the obvious lie.

What if the current UK virulent and violent Russia slandering campaign is but a dry-run for much worse to come? – By now the mental state of western society is at the level of Hitler’s Propaganda Minister, Goebbels’, statement – “Let me control the media, and I will turn any Nation into a herd of Pigs”. Yes, that’s what the west has become, a herd of pigs.

Peter Koenig is an economist and geopolitical analyst. He is also a water resources and environmental specialist. He worked for over 30 years with the World Bank and the World Health Organization around the world in the fields of environment and water. He lectures at universities in the US, Europe and South America. He writes regularly for Global Research; ICH; RT; Sputnik; PressTV; The 21st Century; teleSUR; The Vineyard of The Saker Blog; and other internet sites. He is the author of Implosion – An Economic Thriller about War, Environmental Destruction and Corporate Greed – fiction based on facts and on 30 years of World Bank experience around the globe. He is also a co-author of The World Order and Revolution! – Essays from the Resistance.