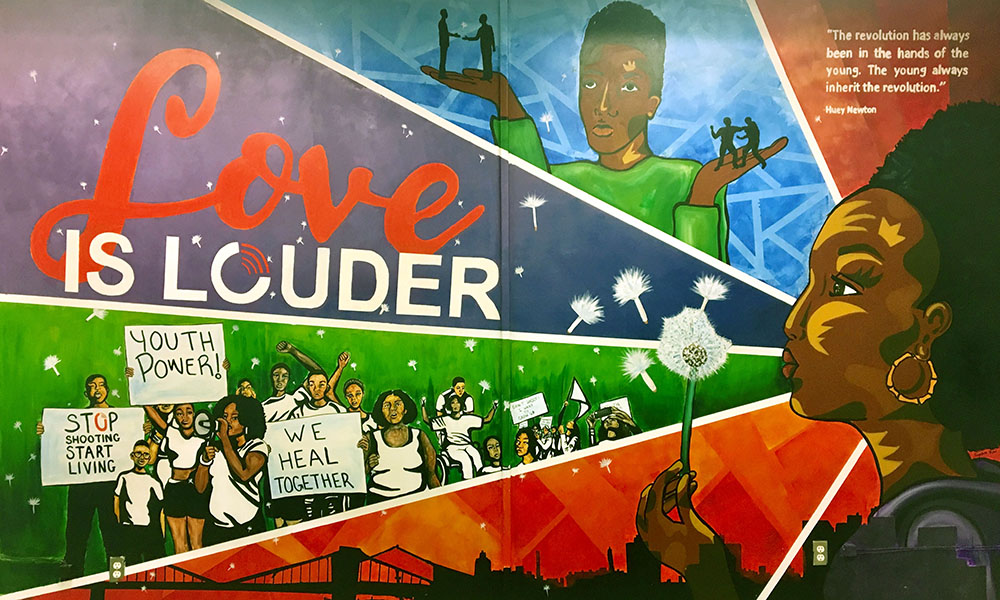 A mural at the Crown Heights Mediation Center that celebrates youth power was created by YO S.O.S. in collaboration with teaching artists Elizabeth Rossi and Kathryn Klopp in the summer of 2017.
Anya van Wagtendonk

30 Apr 2018 — It’s early evening on a warm Tuesday in March, and a handful of teenagers are commanding rapt attention in a corner of a Chelsea art gallery. They’ve just performed a short theater piece of their own devising, an exploration of gun violence and the twisting, ricocheting trajectory that one bullet can follow through a community.

But that’s just the start of the night. This play is not merely artistic expression. At a time when student activism about gun regulation is gaining national attention, these young actors are also experienced organizers against gun violence. Using improvisation, storytelling and play, they aim to draw the audience into the struggle too.

The inspiration comes from Theatre of the Oppressed by Nobel Peace Prize nominee, dramaturge Augusto Boal (1931-2009), a ramification of Paulo Freire’s (1921-1997) seminal book, Pedagogy of the Oppressed. Both educators were Brazilian.

Jackson and the other actors are all alumni of a youth organizing program called YO S.O.S. — “Youth Organizing to Save Our Streets” — administered by the Crown Heights Mediation Center in Brooklyn. The teens spent a year getting trained in anti-violence and anti-oppression techniques.

Beginning in January 2017, they learned theater games under the guidance of Katy Rubin, the executive director of Theatre of the Oppressed NYC. It partners with community groups across the city, forming theater troupes to create original plays about the issues that affect them. As these YO S.O.S. participants neared the end of the program last spring, they began working with TONYC for what was supposed to be one performance.

Instead, they ended up performing together for nearly a year, with some cast changes as students left for college.

The hallmark of a Theatre of the Oppressed show is a forum afterwards, when the audience works with the actors to identify, and then try to solve, problems raised during the play. 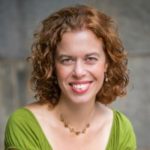 “There’s no performance that just ends in a performance,” Rubin said. “We’re not just showing a problem, we’re brainstorming ideas.”

At the center of this play’s plot is an act of gun violence: one character, played by Khadafy “Mike” Ramirez, 18, is shot to death outside his school by a rival, played by Jackson. The play, called “The School-to-Prison Pipeline,” explores how this moment ripples through the rest of the characters’ lives. Ultimately, one student is suspended from school for being too distressed by the shooting and her classmate’s death to concentrate in class.

Heather Day, who oversees YO S.O.S. as director of youth programs at the Mediation Center, said the play helps demonstrate that gun violence doesn’t exist in a vacuum.

“Every show we’ve done has been about gun violence but also about a lot of other things, because these issues are interconnected,” she said. “For young people, a lot of times the conversation starts with them talking about the oppression they feel at school from their teachers or from school safety officers,” like the one represented in this play dragging a student to suspension.

Every Theatre of the Oppressed performance has a facilitator, known as a Joker.

“The joker in a deck of cards doesn’t have a suit, so is an unbiased facilitator, isn’t coming in with an agenda or an answer or even what the problem is,” Rubin explained. “They’re really coming in with a set of tools to help identify a problem within the community.”

Every student in the YO S.O.S. alumni troupe is trained as a Joker, so they take turns leading audiences through warm-up exercises before each show to get them invested as “spectators” — active viewers.

Audience gets to change the narrative

The Joker also directs the forum afterwards. At the show in March, Gariyana Williams, 19, took on this role. At the play’s conclusion, she asked audience members to name the problems the characters faced. One by one, they shared what they observed.

“Trauma pushed to the side.”

After this exercise, a few individuals can replace a character in a scene with the goal of trying to solve one of the problems they witnessed.

This is harder than it sounds. A proposed solution can open the door to another set of challenges and policy failures. One audience member replaced a distressed student mourning her classmate’s death. That person’s solution was to request to see the school counselor — leading to a conversation about the shortage of trained social workers on school grounds.

But that doesn’t mean a solution is out of reach. Karencia Mitchell, 16, who plays the aggressive school security guard, has become involved with another youth-led activism network that specifically campaigns for more counselors in schools. She said she hopes audiences, by becoming a part of the play, will become more actively involved in their communities afterward, too.

The goal for any Theatre of the Oppressed show is for audience members to walk away feeling empowered to make change — to move, as Rubin put it, from “What would I do in the character’s shoes?” to “What can I do in my own shoes?”

The troupe members will also wrap up their experience with a sense of their own power, Jackson said. This fall, she will begin college with dreams of running for Congress on a criminal justice platform. The YO S.O.S. theater troupe will send her forward with new tools for taking action.

“There are other ways to fight the system other than to be rowdy,” she said. “Once you’re smart enough to fight with your mind and words, nothing can stop you.”