28 Apr 2018 – This article is an adaptation of one of my book reviews. I am adapting it for this venue because I want to share far and wide with readers what corporate citizenship and social responsibility are not versus what the corpocracy and its allies would have you think they are. 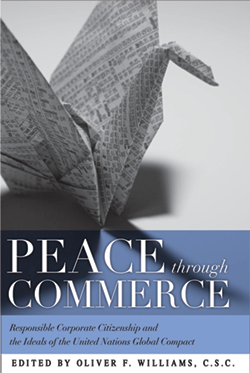 The book is about how responsible corporate citizenship can achieve peace through commercializing it (readers in the know may be scoffing or laughing already).1 The author at the time was on the faculty of the business school at the University of Notre Dame, Director of the Center for Ethics and Religious Values in Business, an ordained Catholic priest, and an editor or author of fourteen books on business ethics. Sorry, but those credentials really don’t impress me.

When I review books if I am at the least skeptical about them at the outset, I do my own exhaustive literature research to check on questionable findings or claims, and never more so than with this book. You will see why as we go along.

The book’s thesis is that the road to peace is through global commerce and adherence to a global code of ethics as codified in the UN’s Global Compact, described by the UN as both a policy platform and a practical framework for companies that are committed to sustainability and responsible business practices.2 That being so either the UN or the book ought to define peace, preferably operationally, so that we know if and when the Compact has achieved its intent. Neither do. The author does define the process of peace building as “the intentional confluence of improbable processes and people to sustain constructive change that reduces violence and increases the potential and practice of justice in human relationships.”3 I suppose I could translate this verbosity into some criteria for progress toward final peace, but why should I even try? I didn’t write the book.

This compact, as many critics including me see it, is nothing but a paper code of ethics that provides an opportunity for multi-national corporations (MNCs) to “blue-wash” (the U.N.’s flag is white/blue, and so is part of the book’s cover) their dirty business-as-usual.4 The compact is a voluntary initiative. There is no monitoring by the UN to see if the compact is being honored in practice and there are no penalties if it isn’t.

Much of the book consists of discussions about corporate social responsibility (CSR), related ideas such as corporate philanthropy and corporate citizenship, and corporate partnerships with non-governmental organizations, or NGOs, in negotiating and working with foreign governments and the populace. The book barely alludes to the fact that having and touting a CSR office and program is a way for the corporation to polish its tarnished image and defend its actions.5 Moreover, CSR is a superfluous concept. Sometimes CSR is referred to as the corporation’s third bottom line, but there are only two bottom lines that matter, the bottom line of results and the bottom line of ethics.  If a corporation conducts its business ethically, it is ipso facto being socially responsible. I don’t know of any corporation that is truly social responsible in all its ramifications.

The book contains case studies written by contributors purporting to demonstrate the commercialization of peace. If commerce does indeed yield peace, the evidence should be laid out in the book. Let’s sample some of the case studies and compare them outside the book with reality. I will tell you when a case contributor’s corporate affiliation may have compromised that person’s objectivity.

The Chevron case is written by a coordinator for the UN, Chevron, and the country involved, Angola. It is loaded with mineral resources, mainly oil and diamonds, and Chevron is Angola’s largest crude oil producer.6 Other than giving a miniscule $3 million to a project to help alleviate poverty, a project where some headway is claimed while admitting that much work remains to be done, and in a country no less where social unrest, crime and public protests were rising, nothing else in this chapter told me what else Chevron did.7 Its operations outside Angola get no attention in this book, operations that “are mired in human rights, environmental, and social damages and harm.”8

The Ford Motor Company case is basically a public relations piece on how the company is becoming environmentally responsible. Two of the contributors are Ford executives and the other two are academics. A few years before this book was written, Ford was heavily criticized by activists, with one claiming that “If Ford were a country, it would be the 10th largest global warming polluter worldwide.’’ 9 The contributors do acknowledge criticisms of Ford from environmentalists and respond that the company is committed to improving its environmental performance. I would guess that Ford has improved it in the last few years. But what does that have to do with peace through commerce? Ford, incidentally, is one of the U.S. corporations that reportedly “made significant contributions to Germany’s war efforts.”10 I would call that the normal “commercializing war.”

The third case is about the Swiss-based, corporation Nestles and what it is doing in developing nations. The contributors, an academic and a public affairs manager for the company, describe how Nestles, in partnership with NGOs and governments, has helped refurbish schools, build housing for the poor, provided earthquake damage relief, helped farmers who are suppliers to the company’s milk product operations, introduced sustainable farming methods, and has become a major food distributor. The contributors highlight a project that paired Nestles with an NGO to make two video series for conflict-torn Nigeria on conflict resolution techniques. The contributors concede that it will be years before they know if the project brings peace. What does Nestles look like outside the book? I found 13 corporate crimes (e.g., “unethical marketing of artificial baby milk,” “exploiting farmers,” “illegal extraction of groundwater”) reportedly committed by Nestles.11

The fourth case is about GE improving the health of the poor in Africa. One contributor is a new university graduate; the other is the VP of GE’s Corporate Citizenship and President of the GE Foundation. GE funded a $20 million initiative to improve the health care and infrastructure of hospitals in Africa. The contributors make the unsubstantiated claim that GE has seen immediate successes. Outside the book GE has been called “one of the most destructive corporations on the planet [because of its] global weapons manufacture and trade, with international criminal convictions for weapons trading fraud and money laundering,” and a “recidivist” corporate criminal “not merely [for its] number of crimes committed — or the dollar amount of the crimes — but a consistent pattern of violating criminal and civil laws over many years.”12

In the next case, a former government affairs analyst of Occidental Petroleum comments on the preliminary findings from the implementation of a “corporate code of conduct” in Columbia. I couldn’t find in the chapter what the findings are and can’t imagine they would amount to anything in any case as you will appreciate in a moment. The company reportedly had authorized several years earlier an air raid during an anti-guerilla operation at a village where one of its pipelines is located in Columbia that mistakenly led to the killing of 18 civilians, including nine children who, survivors said, “ran out of their homes to a nearby road with their hands in the air.”13 The chapter’s contributor says nothing about the air strike. He does mention native unrest and threats of mass suicides over oil explorations, militarization of the zone, and guerrilla sympathizers. He also notes how that history combined with the company’s relocating people and cutting illegal gas and water services near a new company oil well project would “inevitably complicate relations with local communities.” What an understatement! I doubt if the company’s new corporate code of conduct could have helped the company placate the natives.

In the last case I’ll highlight, the VP of international policy and government affairs and deputy general counsel for Bristol-Meyers Squibb (BMS) writes a very short chapter about his company’s $150 million commitment to a program for battling HIV/AIDS in several African countries. While the company has had skirmishes with the law, its program in Africa is certainly a worthy one and I suppose could be considered to represent a very early stage in the peace building process.14  A quick scanning of the Internet while writing this article shows BMS’s continuous record of various criminal activities.  It’s par for the course among pharmaceutical corporations.15

I’m no less skeptical and even more cynical about peace through commerce by MNCs after reading this book, especially its case studies. The book risks being an insult to people who know the real story about the UN and MNCs. Were the academic contributors in some instances bamboozled or corporatized? I don’t know. Maybe they are just very idealistic. I personally know a thing or two about idealism, and I am often called idealistic.

It’s incredibly idealistic and unrealistic to believe that the commerce of MNCs can put an end to all the warring and misery around the world today. It’s not at all inconceivable that corporatizing the world could eventually end life on the planet. The corporate balance sheet, after all, is remarkably insensitive to what matters most in life, life itself.

Gary Brumback, PhD, is a retired psychologist and Fellow of both the American Psychological Association and the Association for Psychological Science. He is the author of The Devil’s Marriage: Break Up the Corpocracy or Leave Democracy in the Lurch and America’s Oldest Professions: Warring and Spying. His most recent book is Corporate Reckoning Ahead.