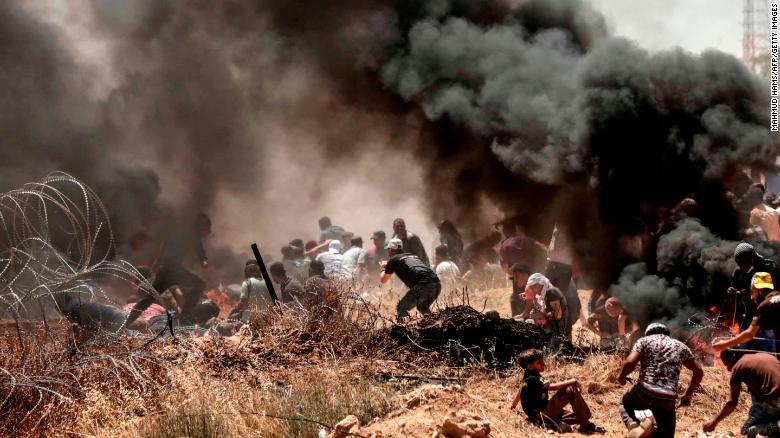 15 May 2018 – Not by a long shot. Not while there is one true Palestinian still standing, still demanding and still fighting.

Then came the unfair UN partition plan of 1947 and we stood fast and said ‘no’.

In 1967 they invaded, conquering the last remaining part of Palestine. Despite maintaining the occupation for the past 51 years we took the brutality, the savagery, the theft of our land, our natural resources and our culture and still we said ‘no’.

In 1987 the Palestinian people under occupation broke their shackles and shed their fears and stood united in the first intifada. Despite the brutal response, the stones against the machine guns, the hope against despair the Palestinians stood their ground and said ‘no’.

In 1993, when the PLO unwisely signed the Oslo Accord giving the Israeli occupation the legitimacy it craved for decades, we the people of Palestine stood fast and said ‘no’.

During the next few years all the agreements that were signed between the PLO (now known as the PA) were honoured diligently by the PA and totally disregarded by the Israeli regime. The land theft and the building of illegal settlements continued apace and in the year 2000 the Palestinian people took to the streets again , in their tens of thousands and started the second intifada. Despite the loss of life and the destruction of homes, the imprisonment and deportations of many leaders and the murder of Yasser Arafat we stood fast and said ‘no’.

The check points in the West Bank under the Oslo Accord mushroomed and they now number over 500. The settlements kept expanding and new ones created as the feral squatters on those settlements, armed to the teeth and with malice in their hearts kept raiding our villages, desecrating our holy places and burning our children alive. Despite all of this, we the Palestinian people stood our ground and said ‘no’.

Israel made a tactical withdrawal from Gaza in 2005. In the words of a Palestinian student in London with whom I shared a platform a few years later, and I quote, “The Israeli Occupation Army put us in a cage, locked the door and threw the key deep into the sea.” We stood fast and we said ‘no’.

Israel does not take rejection or resistance kindly. The army invaded and continues to invade towns and villages in the West Bank on a daily basis. They kill, they kidnap, they imprison, they torture and they destroy. Still we say ‘no’.

Then came the unprovoked Israeli attacks on Gaza 2008, 2012 and 2014 deploying unimaginable evil force and internationally prohibited armaments, culminating in the near total destruction of Gaza. They polluted and poisoned the underground water resources to the extent that a United Nations announced report in 2015 stated that if this did not cease Gaza would be uninhabitable by 2020.

Naturally, nothing changed. The situation in Gaza is more dire than ever and the people of Gaza have reached suffocation point. As a result they did not lie down and die, as Israel, America and their allies would wish them to do. The stood fast and said ‘no’ and for the last six weeks they have been coming out in their hundreds and thousands in the so-called buffer zone between Israel and Gaza challenging the occupation and demanding their right of return to the towns and villages that they were expelled from 70 years ago today.

The brutality and callous disregard for Palestinian lives and international law by the Israeli Occupation Army reached a zenith yesterday when they gunned down more than fifty Palestinians and wounded in excess of 2700. No Israelis have been killed.

The Trump Administration and its acolytes are blaming Hamas for this slaughter. ‘The victims are to blame’, they say, ‘not the aggressors’.

Yet, the Palestinians, all over Palestine are standing fast and saying loud and clear.

‘No, never will we abandon Jerusalem.’

‘No, never will you prevail.’

I shall close this with the words of one of my compatriots in Gaza. Hammad Abu Safiya, a grandfather of 14 grandchildren said yesterday.

Jafar M Ramini is a Palestinian writer and political analyst, based in London, presently in Perth, Western Australia. He was born in Jenin in 1943 and was five years old when he and his family had to flee the terror of the Urgun and Stern gangs. Justice for the people of Palestine is a life-long commitment.