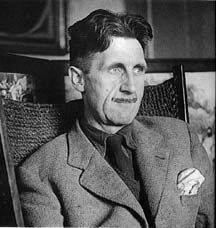 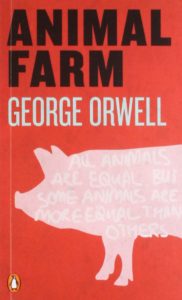 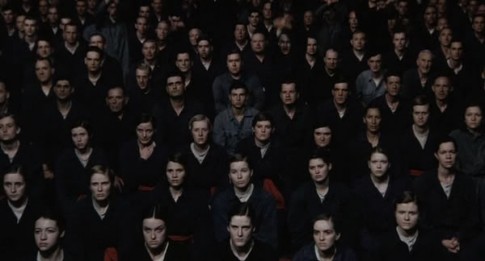 Scene from “1984”, a film by Michael Radford adapted from the original novel from George Orwell.

Animal Farm was one of Orwell’s finest works, full of wit and fantasy and admirably written. It has, however, been overshadowed by his last book, Nineteen Eighty-four (1949), a novel he wrote as a warning after years of brooding on the twin menaces of Nazism and Stalinism. The novel is set in an imaginary future in which the world is dominated by three perpetually warring totalitarian police states. The book’s hero, the Englishman Winston Smith, is a minor party functionary in one of these states. His longing for truth and decency leads him to secretly rebel against the government, which perpetuates its rule by systematically distorting the truth and continuously rewriting history to suit its own purposes. Smith has a love affair with a like-minded woman, but then they are both arrested by the Thought Police. The ensuing imprisonment, torture, and reeducation of Smith are intended not merely to break him physically or make him submit but to root out his independent mental existence and his spiritual dignity until he can love only the figure he previously most hated: the apparent leader of the party, Big Brother. Smith’s surrender to the monstrous brainwashing techniques of his jailers is tragic enough, but the novel gains much of its power from the comprehensive rigour with which it extends the premises of totalitarianism to their logical end: the love of power and domination over others has acquired its perfected expression in the perpetual surveillance and omnipresent dishonesty of an unassailable and irresistible police state under whose rule every human virtue is slowly being suborned and extinguished. Orwell’s warning of the potential dangers of totalitarianism made a deep impression on his contemporaries and upon subsequent readers, and the book’s title and many of its coined words and phrases (“Big Brother is watching you,” “newspeak,” “doublethink”) became bywords for modern political abuses.