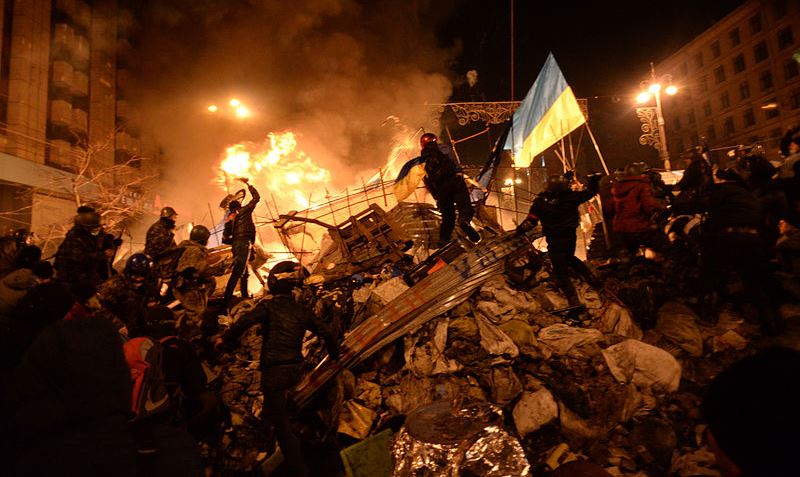 3 Jun 2018 – This will document that the ‘new Cold War’ between the US and Russia did not start, as the Western myth has it, with Russia’s involvement in the breakaway of Crimea and Donbass from Ukraine, after Ukraine — next door to Russia — had suddenly turned rabidly hostile toward Russia in February 2014. Ukraine’s replacing its democratically elected neutralist Government in February 2014, by a rabidly anti-Russian Government, was a violent event, which produced many corpses. It’s presented in The West as having been a ‘revolution’ instead of a coup; but whatever it was, it certainly generated the ‘new Cold War’ (the economic sanctions and NATO buildup on Russia’s borders); and, to know whether it was a coup, or instead a revolution, is to know what actually started the ‘new Cold War’, and why. So, this is historically very important.

Incontrovertible proofs will be presented here not only that it was a coup, but that this coup was organized by the US Government — that the US Government initiated the ‘new Cold War’; Russia’s Government reacted to America’s aggression, which aims to place nuclear missiles in Ukraine, less than ten minutes flight-time from Moscow. During the 1962 Cuban Missile Crisis, America had reason to fear Soviet nuclear missiles 103 miles from America’s border. But, after America’s Ukrainian coup in 2014, Russia has reason to fear NATO nuclear missiles not just near, but on, Russia’s border. That would be catastrophic.

If America’s successful February 2014 overthrow and replacement of Ukraine’s democratically elected neutralist Government doesn’t soon produce a world-ending nuclear war (World War III), then there will be historical accounts of that overthrow, and the accounts are already increasingly trending and consolidating toward a historical consensus that it was a coup — that it was imposed by “somebody from the new coalition” — i.e., that the termination of the then-existing democratic (though like all its predecessors, corrupt) Ukrainian Government, wasn’t authentically a ‘revolution’ such as the US Government has contended, and certainly wasn’t at all democratic, but was instead a coup (and a very bloody one, at that), and totally illegal (though backed by The West).

The purpose of the present article will be to focus attention on precisely whom the chief people are who were responsible for perpetrating this globally mega-dangerous (‘Cold-War’-igniting) coup — and thus for creating the world’s subsequent course increasingly toward global nuclear annihilation.

If there will be future history, then these are the individuals who will be in the docks for that history’s harshest and most damning judgments, even if there will be no legal proceedings brought against them. Who, then, are these people?

Clearly, Victoria Nuland, US President Barack Obama’s central agent overseeing the coup, at least during the month of February 2014 when it climaxed, was crucial not only in overthrowing the existing Ukrainian Government, but in selecting and installing its rabidly anti-Russian replacement. The 27 January 2014 phone-conversation between her and America’s Ambassador in Ukraine, Jeffrey Pyatt was a particularly seminal event, and it was uploaded to youtube on 4 February 2014. I have discussed elsewhere that call and its significance. Nuland there and then abandoned the EU’s hope for a still democratic but less corrupt future government for Ukraine, and Nuland famously said, on that call “Fuck the EU,” and she instructed Pyatt to choose instead the rabidly anti-Russian, and far-right, Arseniy Yatsenyuk. This key event occurred 24 days before Ukraine’s President Victor Yanukovych was overthrown on February 20th, and 30 days before the new person to head Ukraine’s Government, Yatsenyuk, became officially appointed to rule the now clearly fascist country. He won that official designation on February 26th. However, this was only a formality: Obama’s agent had already chosen him, on January 27th.

The second landmark item of evidence that it had been a coup and nothing at all democratic or a ‘revolution’, was the 26 February 2014 phone-conversation between the EU’s Foreign Minister Catherine Ashton and her agent in Ukraine investigating whether the overthrow had been a revolution or instead a coup; he was Estonia’s Foreign Minister, Urmas Paet, and he told her that he found that it had been a coup, and that “somebody from the new coalition” had engineered it — but he didn’t know whom that “somebody” was. Both Ashton and Paet were shocked at this finding, but they proceeded immediately to ignore that matter, and to discuss only the prospects for Europe’s investors in Ukraine, to be able to get their money back — their obsession was Ukraine’s corruption. Ashton told Paet that she had herself told the Maidan demonstrators, “you need to find ways in which you can establish a process that will have anti-corruption at its heart.” So, though the EU was unhappy that this had been a coup, they were far more concerned to protect their investors. In any case, the EU clearly wasn’t behind Ukraine’s coup. Equally clearly, they didn’t much care whether it was a coup or instead what the US Government said, a ‘revolution’.

The network behind this coup had actually started planning for the coup back in 2011. That’s when Eric Schmidt of Google, and Jared Cohen, also now of Google but still continuing though unofficially as US Secretary of State Hillary Clinton’s chief person tasked to plan ‘popular movements’ to overthrow both Yanukovych in Ukraine, and Assad in Syria.

Then, on 1 March 2013, the implementation of this plan started: the first “tech camp” to train far-right Ukrainians how to organize online the mass-demonstrations against Yanukovych, was held inside the US Embassy in Kiev on that date, which was over nine months before the Maidan demonstrations to overthrow Ukraine’s democratically elected President started, on 20 November 2013.

The American scholar Gordon M. Hahn has specialized in studying the evidence regarding whom the actual snipers were who committed the murders, but he focuses only on domestic Ukrainian snipers and ignores the foreign ones, who had been hired by the US regime indirectly through Georgian, Lithuanian and other anti-Russian CIA assets (such as via Mikheil Saakashvili, the ousted President of Georgia whom the US regime subsequently selected to become the Governor of the Odessa region of Ukraine). Hahn’s 2018 book Ukraine Over the Edge states on pages 204-209:

“Yet another pro-Maidan sniper, Ivan Bubenchik, emerged to acknowledge that he shot and killed Berkut [the Government’s police who were protecting Government buildings] before any protesters were shot that day [February 20th]. In a print interview, Bubenchik previews his admission in Vladimir Tikhii’s documentary film, Brantsy, that he shot ahd killed two Berkut commanders in the early morning hours of February 20 on the Maidan. … Bubenchik claims that [on February 20] the Yanukovich regime started the fire in the Trade Union House — where his and many other EuroMaidan fighters lived during the revolt — prompting the Maidan’s next reaction. As noted above, however, pro-Maidan neofascists have revealed that the Right Sector started that fire. … Analysis of the snipers’ massacre shows that the Maidan protesters initiated almost all — at least six out of a possible eight — of the pivotal escalatory moments of violence and/or coercion. … The 30 November 2013 nighttime assault on the Maidan demonstrators is the only clear exception from a conclusive pattern of escalating revolutionary violence led by the Maidan’s relatively small but highly motivated and well-organized neofascist element.”

Although Hahn’s book barely cites the first and most detailed academic study of the climactic coup period of late February, Ivan Katchanovski’s poorly written “The ‘Snipers’ Massacre’ on the Maidan in Ukraine”, which was issued on 5 September 2015, Hahn’s is consistent with that: both works conclude that the available evidence, as Katchanovski puts it, shows that:

“The massacre was a false flag operation, which was rationally planned and carried out with a goal of the overthrow of the government and seizure of power. It [his investigation] found various evidence of the involvement of an alliance of the far right organizations, specifically the Right Sector and Svoboda, and oligarchic parties, such as Fatherland. Concealed shooters and spotters were located in at least 20 Maidan-controlled buildings or areas.”

Hahn downplays US heading of the coup. But shortly before the coup, the CIA secretly trained in Poland the Right Sector founder/leader Dmitriy Yarosh (“Dmytro Jarosz”), who headed Ukraine’s snipers. So, even the Ukrainian ones were working for the US

Summarizing them here: Two Georgian snipers say Saakashvili hired them in Tbilisi for a US-backed operation. But they know only about the “Georgian Legion” part. They think it was patterned on Georgia’s Rose Revolution. They each got $1000 for the operation and flew to Kiev on 15 January and were promised $5000 on return. (9:00) “We had to provoke the ‘Berkut’ police so they would attack the people. By February 15th the situation [at the Maidan] was getting worse every day. Then the first shots were fired.” It was February 15 or 16. Mamunashvili [Saakashvili’s man] introduced them to “an American military guy, … Brian Christopher Boyenger” a former “sniper for the 101st Airborne Division” who “after Maidan he went to Donbass” to fight in the “Georgian Legion” but during the coup-climax, the far-right Andriy “Parubiy came very often,” and “Brian always accompanied him” and also instructing there was Vladimir Parasyuk, one of the leaders of the Maidan. The snipers were told not to aim but just to kill people randomly, to create chaos. There were also two Lithuanian snipers in the room. Some went down from the Ukraine Hotel to the second floor of the Conservatory Building, balcony. “They started to take out the guns and distributed them to each group.” “Then I heard shots from the next room” It lasted 15 minutes, then they were all ordered to escape.

On 13 February 2015 was telecast a German documentary, “Maidan Snipers. German TV expose. ARD Monitor. Eng Subs” in which one of the demonstrators said that many of the bullets were fired from buildings controlled by the demonstrators, but that “We were also shot at from the other direction.” However, at least before 21 February 2014, police (Berkut) were seized by demonstrators and at least the possibility exists that some of the Right Sector snipers were taking positions in and especially atop some of the government buildings so as to fire down into the crowd and seem to be firing from Yanukovych’s side. Gordon Hahn hasn’t been able to verify any firing in February 2014 by the Yanukovych government. Moreover: “they were the same snipers, killing people from both sides.”

On 1 February 2016 was posted to youtube a French documentary, “Ukraine — Masks of the Revolution” which shows, from a meeting at Davos, at 48:00, Victoria Nuland, the announcer trying to speak with her and saying to the audience, “The US diplomat who came to support the Revolution, could she really ignore the existence of the paramilitaries?”; 48:50 Larry Summers at a meeting in Kiev during 10-12 September 2015 and then later at the “12th YES Annual Meeting” saying, “Ukraine is an essential outpost of our fundamental military interests”; 49:25: Petraeus also shown there and the announcer says, “He also thinks that Ukraine is essential to block Putin.” Petraeus urges investment in Ukraine to block Russia; 51:00 McChrystal there also urges arming Ukraine; 51:50 Nuland is there and the announcer says: “The country that is most invested in Ukraine’s future is the US” “She is the architect of America’s influence in Ukraine.” Nuland says there at the “YES” meeting, “We had a significant impact on the battlefield.” But the US regime blames Russia for that war.

Gordon Hahn’s restriction of blame for the coup only to native Ukrainian nazis doesn’t fit the evidence, because there clearly is leadership of Ukraine’s nazis by the US regime. Furthermore, the US regime and its Ukrainian client-state are the only two nations at the U.N. who vote and repeatedly to back fascism, nazism and Holocaust-denial. The anti-Russia nazis took over America’s Government, which has taken over Ukraine’s. All of this goes back to the key US decision, which was made on 24 February 1990.