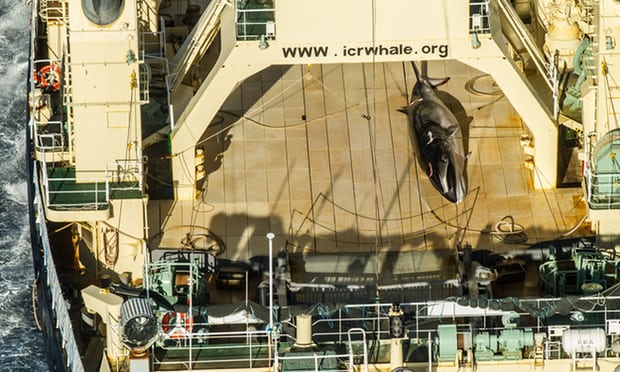 Japan resumed whaling in 2016 under a revamped plan and with reduced quotas.
Photograph: Glenn Lockitch/AFP/Getty Images

30 May 2018 – More than 120 pregnant whales were killed during Japan’s annual “research” hunt in the Southern Ocean last summer, a new report has revealed.

Of the 333 minke whales caught during the controversial 12-week expedition, 181 were female – including 53 immature ones. Figures show that of the 128 mature female whales caught in the hunt, 122 were pregnant.

“Apparent pregnancy rate of sampled animals was high (95.3%) and no lactating animal was observed in this survey,” said a technical report submitted to the International Whaling Commission.

Conservationists seized on the document as further evidence of the “abhorrent” whaling programme, which Japan argues is conducted for scientific purposes.

“The killing of 122 pregnant whales is a shocking statistic and sad indictment on the cruelty of Japan’s whale hunt,” Alexia Wellbelove, a senior program manager at Humane Society International, said in a statement.

“It is further demonstration, if needed, of the truly gruesome and unnecessary nature of whaling operations, especially when non-lethal surveys have been shown to be sufficient for scientific needs.”

In 2014, the international court of justice ordered a temporary halt to the annual slaughter of whales in the Southern Ocean, finding that the Japanese programme known as Jarpa II was not for for scientific purposes. 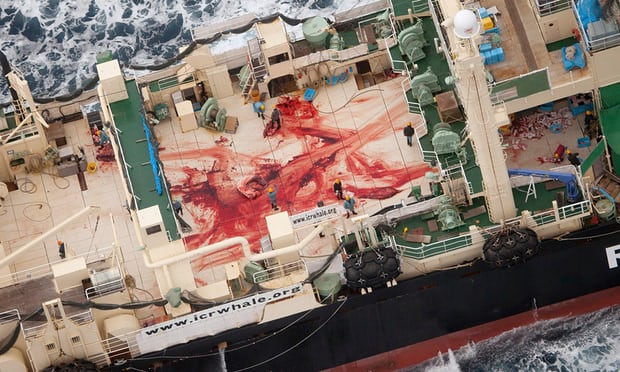 But Japan resumed whaling in the region two years later under a revamped whaling plan, that included reducing its catch quota to about a third.

“Research effort began 60 minutes after sunrise and ended 60 minutes before sunset, with a maximum 12 hour per day,” said the report, prepared by representatives of the Institute of Cetacean Research – a whale research agency that is associated with Japan’s fisheries ministry. It was co-written with authors from the fisheries processing company Kyodo Senpaku and Tokyo University of Marine Science and Technology.

“One or two minke whales were sampled randomly from each primary sighted school using harpoons with a 30g penthrite grenade,” it said, referring to an explosive material.

“Sampled whales were immediately transported to the research base vessel, where biological measurements and sampling were carried out.”

The report said 11 targeted whales managed to get away before being hit, mainly because they had moved into an area where sea ice was dense.

Wellbelove called on Australia and other anti-whaling countries to send “the strongest possible message to Japan that it should stop its lethal whaling programs”.