5 Jun 2018 — Mohammed Hashim hid in the hills and watched as his brother begged for his life, his arms bound behind his back as soldiers marched the 35-year-old teacher away. It was the last time he saw him alive.

It was Aug. 26, the day after Rohingya Muslim separatist attacks on military outposts in the Rohingya homeland in western Myanmar. In their wake, Myanmar’s military and local Buddhists would respond with a campaign of rape, massacre and arson that has driven about 700,000 Rohingya into Bangladesh. 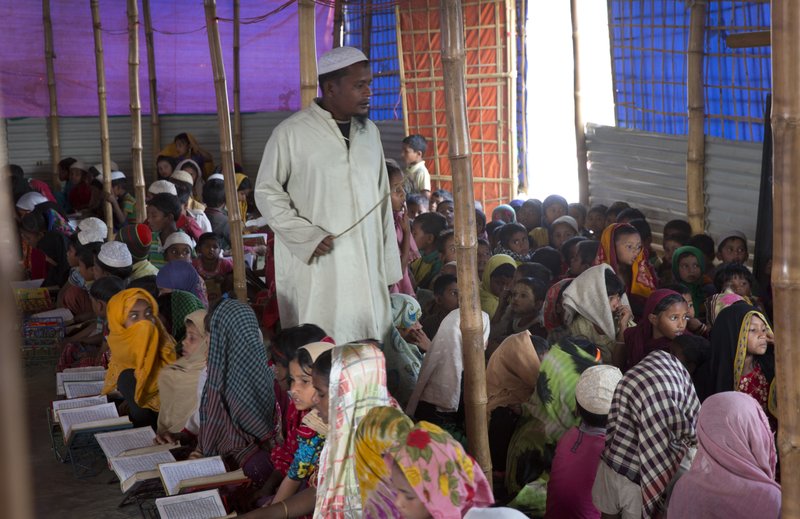 In this Jan. 16, 2018, photo, a Rohingya teacher conducts a class for refugee children inside a Mosque at Balukhali refugee camp near Cox’s Bazar, Bangladesh. Associated Press interviews with nearly a dozen Rohingya teachers, elders and religious leaders reveal that educated Rohingya were already subject to systematic and widespread harassment, arrests, torture and, in some cases, killings. (AP Photo/Manish Swarup)

But more than a dozen Rohingya teachers, elders and religious leaders told The Associated Press that educated Rohingya — already subject to systematic and widespread harassment, arrests and torture — were singled out, part of Myanmar’s operation to drive the Muslim Rohingya from majority Buddhist Myanmar.

Soldiers targeted the educated, they said, so there would be no community leaders left willing to speak up against the pervasive abuse.

It’s an old tactic, according to those who study genocide — and often a precursor to killing.

“My brother apologized and pleaded with the military not to kill him; he showed them his ID card and said, ‘I’m a teacher, I’m a teacher.’ But the government had planned to kill our educated people, including my brother,” Hashim said. 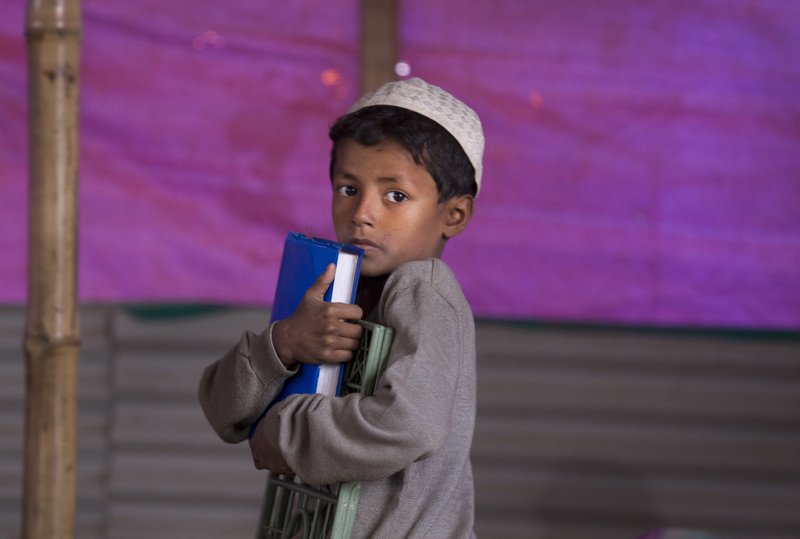 In this Jan. 17, 2018, photo, a Rohingya refugee boy holds his books as he leaves a makeshift school in a Mosque at Balukhali refugee camp near Cox’s Bazar, Bangladesh. Associated Press interviews with nearly a dozen Rohingya teachers, elders and religious leaders reveal that educated Rohingya were already subject to systematic and widespread harassment, arrests, torture and, in some cases, killings.
(AP Photo/Manish Swarup)

Teachers, elders and religious leaders tell The Associated Press that educated Rohingya have been singled out as part of Myanmar’s operation to drive the Muslim minority from Buddhist Myanmar. (June 5)

He was interviewed at one of the teeming Bangladesh refugee camps that have sprung up along the hilly border with Myanmar since the Rohingya began fleeing in August. Hashim, who is also a teacher, ran for the hills and hid after the military surrounded his hamlet in northern Rakhine state, where most of the Rohingya lived. Others told similar accounts.

After the Aug. 25 attacks, soldiers in Maung Nu village, the site of a massacre, asked villagers: “Where are the teachers?”

Rahim, a 26-year old high school science and math teacher who was known to many soldiers because he taught their children at the local battalion school, saw the military coming and fled.

“I knew I was dead if I got caught. They were hunting me,” said Rahim, who, like some Rohingya, uses only one name. “They knew that I would always speak out for the people. They wanted to destroy us because they knew that without us they could do whatever they wanted to the rest of the Rohingya.” 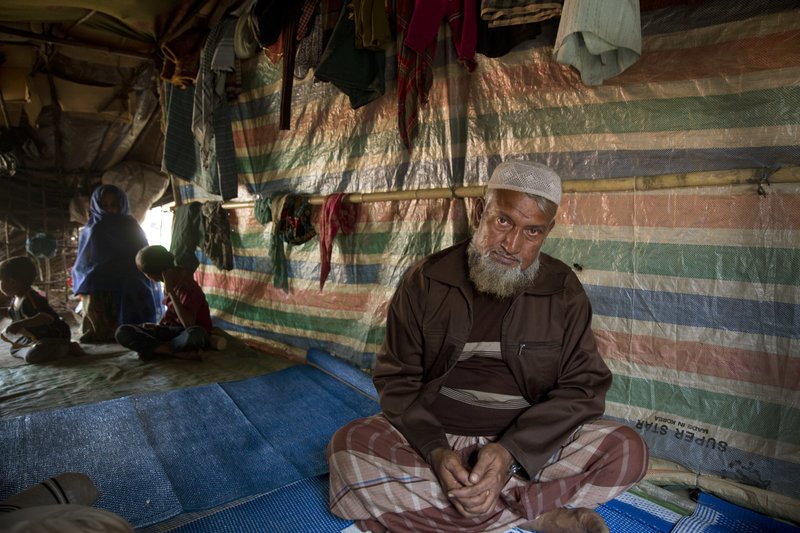 In this Jan. 16, 2018, photo, Rohingya refugee Rahamat Ullah, 53, a mullah from Koe Fan Kauk village, sits in his makeshift shelter in Kutupalong refugee camp near Cox’s Bazar, Bangladesh. “We are being targeted because people listen to us,” he said. Associated Press interviews with nearly a dozen Rohingya teachers, elders and religious leaders reveal that educated Rohingya were already subject to systematic and widespread harassment, arrests, torture and, in some cases, killings. (AP Photo/Manish Swarup)

Researchers see comparisons between what is happening in Myanmar and other genocides, including the Holocaust.

“Listening to these stories, it sounds so similar. First you take out the religious or the political leaders, and then you start going down to the civilian population and you start tightening things more and more,” said Karen Jungblut, research director at the USC Shoah Foundation, who has conducted interviews in the Bangladesh camps. “This was not just some random spurt of regional violence here and there because Myanmar felt it was being attacked by a ‘terrorist group.’ … It felt way too organized.”

A military official who refused to give his name and rank bristled when asked about the Rohingya statements, saying Tuesday that he “couldn’t accept the term Rohingya, which does not exist in Myanmar.” He said Myanmar had not targeted educated members of the ethnic group in “clearing operations,” which is how the government has described the crackdown.

Thomas MacManus, a specialist in international state crimes at Queen Mary University of London who has researched the Rohingya since 2012, said: “The objective appears to be to destroy the Rohingya, and one way to do that is to destroy their culture and remove their history. It’s part of the genocide tactic.”

Interviews with about 65 refugees in a September report by the U.N. Human Rights Office of the High Commissioner indicate that “the Myanmar security forces targeted teachers, the cultural and religious leadership, and other people of influence in the Rohingya community in an effort to diminish Rohingya history, culture and knowledge.”

This targeting was “well-organized, coordinated, and systematic … thereby challenging the assertion that it was merely collateral damage of the military” operations after the August insurgent attacks.

The Buddhist majority has long reviled the Rohingya as “Bengali interlopers” in northern Rakhine state and suppressed their ability to maintain their culture and go to school. 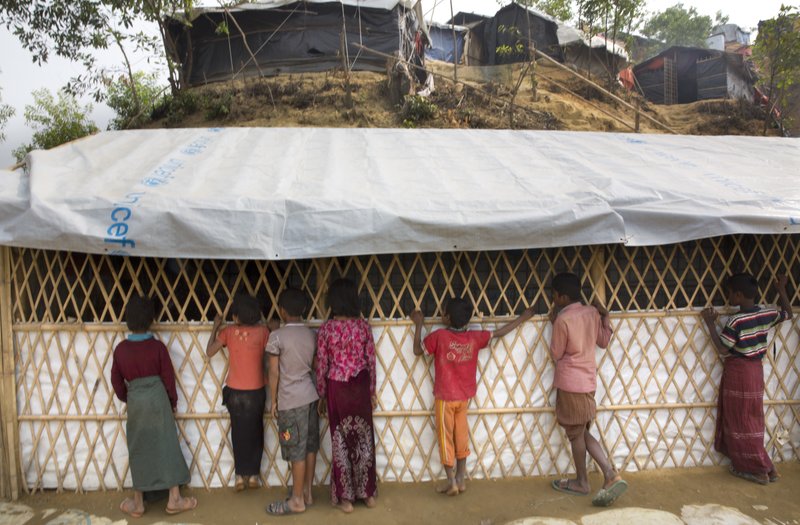 In this Jan. 14, 2018, photo, Rohingya refugee children look at other children attending classes in a school at Balukhali refugee camp near Cox’s Bazar, Bangladesh. Associated Press interviews with nearly a dozen Rohingya teachers, elders and religious leaders reveal that educated Rohingya were already subject to systematic and widespread harassment, arrests, torture and, in some cases, killings. (AP Photo/Manish Swarup)

“Literacy is not high with the Rohingya; it is difficult to get an education in the first place, so targeting the teachers is a similar path that you’ve seen and heard in other places that ended up in genocide,” said Jungblut.

An Amnesty International report from November documented a system of institutionalized discrimination and segregation of the Rohingya that was meant to erase their identity. Since an outbreak of Buddhist-Muslim violence in 2012, Rohingya children have been prevented from attending Buddhist schools, and official government teachers often refuse to come to Rohingya villages because of purported safety worries, the report said. That leaves the bulk of their education left to “local community schools staffed by untrained volunteer teachers.”

Teachers interviewed by AP said they were paid only by community donations, were banned from teaching the Rohingya language, history and culture, and could only speak Burmese; many said they were prohibited from using the word “Rohingya.”

“Teachers in school are their windows to the world,” said Arif Hossein, 31, a former elementary school teacher from Khular Bil in Maungdaw Township. “They teach them the meaning of the word Rohingya. Who tells them about our history and about how long we have lived there as a community? Teachers do.”

In the months before Aug. 25, informers made it too dangerous to teach Rohingya language or culture, even in secret, according to a longtime headmaster at a middle school who spoke on condition of anonymity because of safety worries if he’s ever allowed to return home. 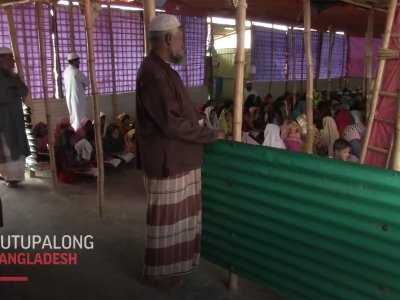 Teachers, elders and religious leaders tell The Associated Press that educated Rohingya have been singled out as part of Myanmar’s operation to drive the Muslim minority from Buddhist Myanmar. (June 5)

“I couldn’t speak out. Informers would follow me every day, every time I left the house. The government police would come at night and accuse me of giving the insurgents food, which was false, and my house was searched.”

After the 2012 violence, he said soldiers put him and 18 other elders and teachers face down on the ground, with their hands bound, laid a tarp over them and began stomping and beating them. He spent four years in prison, for allegedly burning homes, a charge he denies, and was released in 2016.

Four days before the Aug. 25 violence, he says about 300 soldiers surrounded his home. He was handcuffed with his son and brought to the school, where they saw other teachers and five mullahs. Soldiers confiscated anything they thought might have been used to help the insurgents. His son was kicked and beaten.

The headmaster fled to Bangladesh soon after the August killing began.

“There are some educated people left in my village, but they will never raise their voices,” he said, as another man wept silently, listening to him speak. “Things will get worse for the Rohingya because no one will speak out for them. They are too afraid. I think there will be no chance the Rohingya can stay in Myanmar. They all will come to Bangladesh.”

The penalty for speaking out can be harsh.

Months before the August crackdown, the military called a meeting in the village of Chein Kar Li to demand more money from villagers who wanted to fish the local rivers. Kafait Ullah, a 26-year-old primary school teacher, took a breath, steadied his shaking hands and rose to ask a question.

“Why do we need to give you so much money?” he asked.

He knew, with certainty, that he would be punished. “I was so scared that I was shaking, but I thought it was my responsibility to speak out for my community because they didn’t have money or education; they couldn’t talk for themselves,” Ullah recalled, in an interview at the refugee camp.

He said he was fined and made to go every morning to a military camp and sign a piece of paper, so the soldiers could monitor his actions. They searched his home and threatened him with jail.

Others interviewed also described repression. They said the government monitored teachers, mullahs and other educated people, claiming they were working with outsiders to collect and send abroad information about human rights abuses meant to make Myanmar look bad. 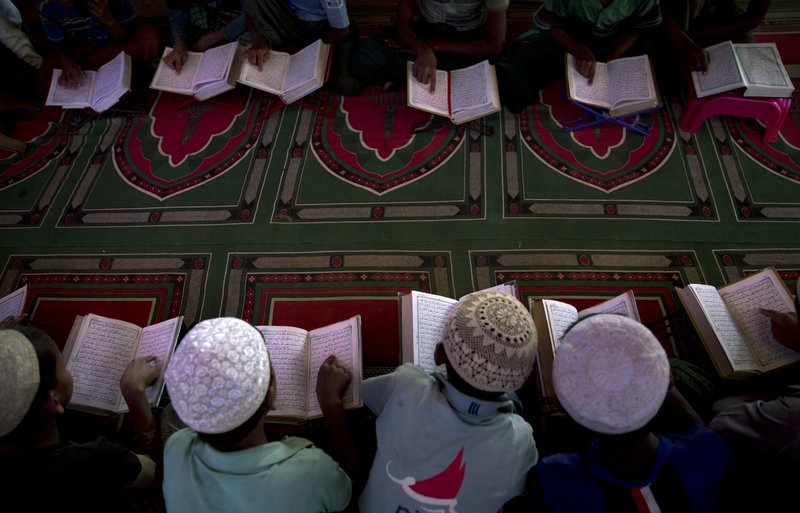 “We are being targeted because people listen to us,” said Maulana Rahmat Ullah, 53, a mullah from Khular Bil.

After Buddhist-Muslim violence broke out in October 2016, Ullah said that about 500 soldiers came to his village and gathered everyone in a clearing. The soldiers, who lived nearby and knew the villagers well, separated the mullahs and teachers and those with education from the group. Soldiers beat him unconscious with a heavy wooden club and kept him for two days in a crowded room, with no food or water. Ullah said the attack was because villagers had dared to speak about their oppression to visiting U.N. officials.

Tears streamed down Ullah’s face as he showed the torture scars on his arms and legs. “They knew I spoke up when others didn’t, and that I represented the uneducated, the people with no power.”

In the months before the Aug. 25 violence, the military again gathered the educated and ordered them not to talk with outsiders about what was happening to the Rohingya, Ullah said. Their homes were searched; their valuables were taken.

“They didn’t want us to speak out, and we didn’t. We couldn’t. I wanted to raise my voice, but they would have arrested me and tortured me,” Ullah said. “There are not enough people who know our history now to pass it down to the people. I am one of the last. We were under so much pressure for so long that it’s almost all gone. Who’s left to tell it?”