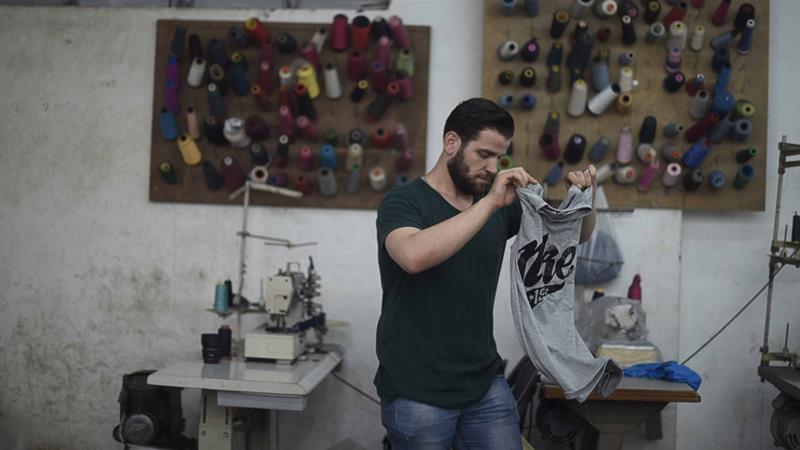 Israel suspended imports and exports at the Kerem Shalom Crossing, leaving products unsold and leading to a stoppage at some factories. [Abed Zagout/Anadolu Agency]

13 Jul 2018 – Beleaguered business owners and merchants in the Gaza Strip have voiced shock and anger at an Israeli decision to seal off the besieged territory’s sole commercial crossing.

The move by the Israeli government on Monday [9 Jul] to close Kerem Shalom Crossing puts thousands of jobs at risk, company owners said, warning that it raised the spectre of financial ruin for those who have made major investments or deals for goods scheduled to enter or leave Gaza.

Israel said its measure was in response to incendiary kites and balloons that have been sent over the fence by demonstrators in Gaza and scorched Israeli agricultural lands.

The Palestinian Crossings Authority was instructed that only items deemed “humanitarian” by Israeli authorities will be allowed to enter Gaza including food, hygiene and medical supplies, fuel, animal feed and livestock.

The entry of all other items, such as construction materials, furniture, wood, electronics, fabric, clothing, blankets and generators have been banned.

Exports of any kind from Gaza have also been prohibited, threatening jobs in factories and businesses in the Strip that have until now managed to survive the 11-year Israeli-Egyptian blockade.

“If this continues it will be a disaster for our businesses,” said Kamal Abdul Hadi, the owner of a carpentry and furniture company in Gaza who depends financially on exporting his goods to Israel and the occupied West Bank through Kerem Shalom.

“It’s crazy. We hope Israel won’t keep the crossing closed because it would be a death penalty for us all,” he added.

According to statistics by the UN and Gisha, the Legal Centre for Freedom of Movement, 55 percent of the goods that would normally enter Gaza would now be denied entry under the new restrictions.

“The economy is terrible here and we get our profits basically through exporting. There’s no financial liquidity here; no one is able to buy,” said Abdul Hadi.

“Some wood panel merchants in Gaza won’t even sell to us now because they’re afraid there’ll be no more wood coming into Gaza and those who are willing to sell have now increased the price by 30 percent. We don’t know what to do.” 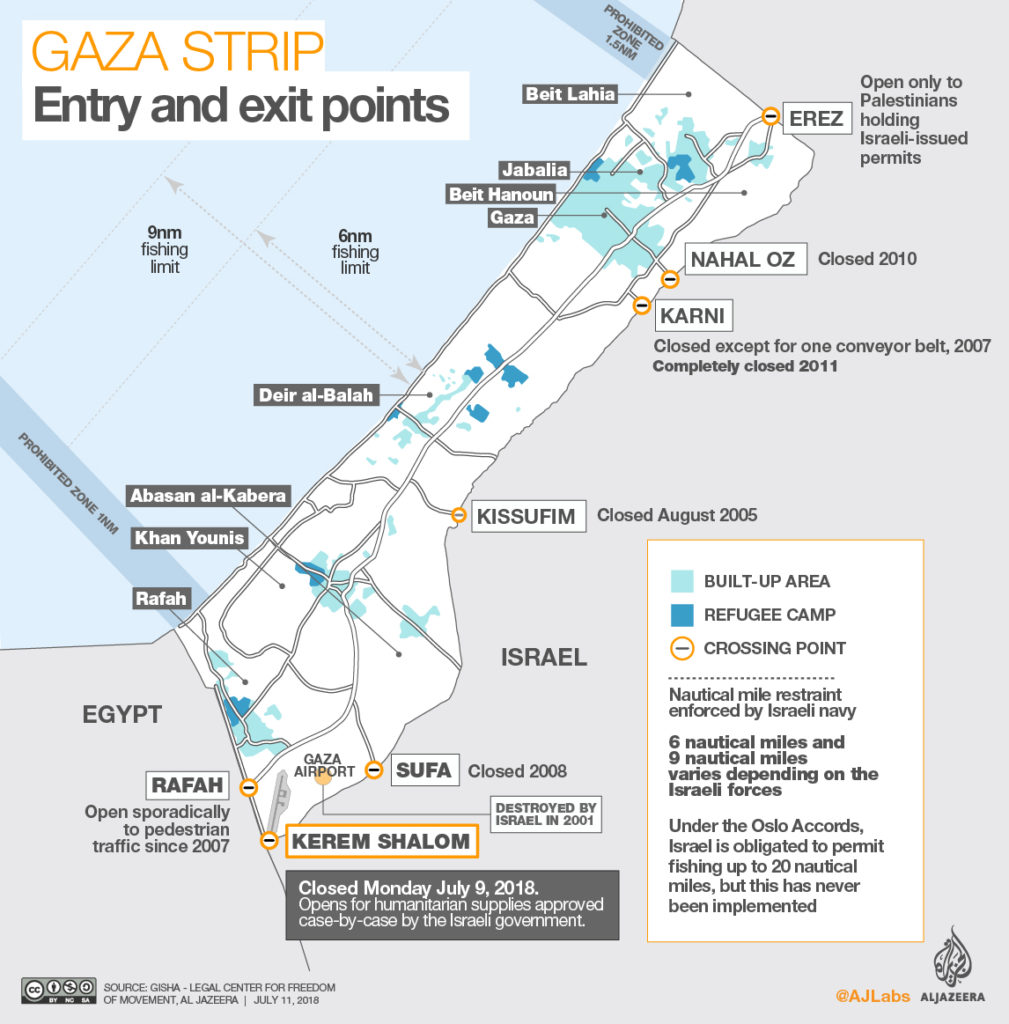 Making ends meet under a blockade has always been challenging for Palestinians in Gaza.

But things worsened when Mahmoud Abbas, president of the Palestinian Authority (PA) and leader of the Fatah political party, imposed financial sanctions on Gaza last year in an attempt to isolate Hamas which runs the Strip. The sanctions have had a detrimental effect on ordinary families.

Salaries for PA employees were slashed by a third and social assistance was suspended for hundreds of families. Consequently, many businesses in the past year have had little to no clientele. As such, they have heavily relied on exports to put bread on the table.

Prices for essential materials such as cement spiked immediately following Israeli Prime Minister Benjamin Netanyahu’s announcement – and continue to climb. With construction goods, which accounted for 44 percent of imports in June, banned, construction work is expected to halt in Gaza.

Among the cancelled scheduled imports following Israel’s announcement were 16 truckloads of building materials for UN agencies designated for education, health and water projects. 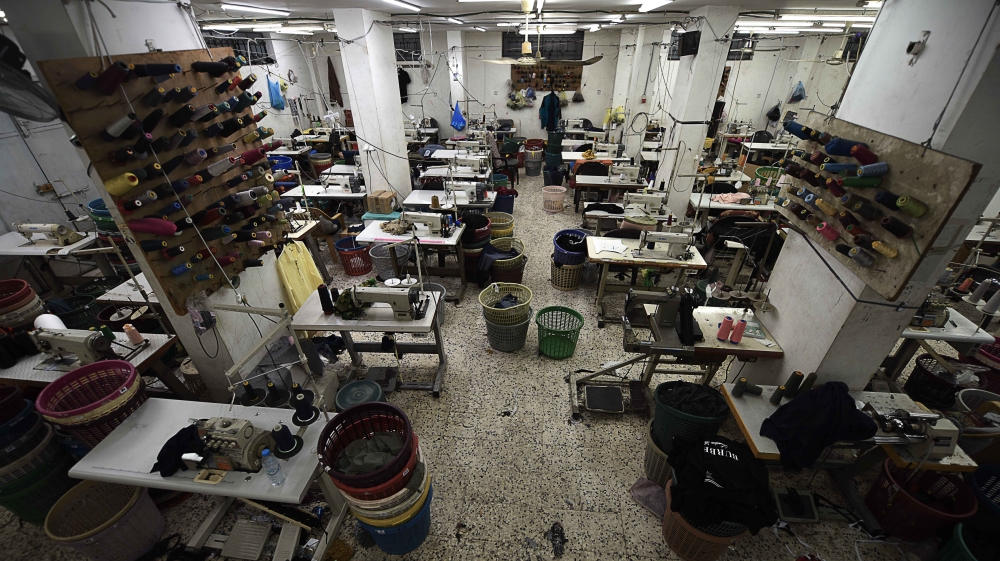 Exports from Gaza have been banned, threatening thousands of jobs in factories and businesses in the strip. [Abed Zagout/Anadolu Agency]

The UN said in a statement on Friday that the new restrictions are likely to exacerbate the “already dire living conditions in Gaza, driven by over 11 years of an Israeli blockade that has raised concerns of collective punishment alongside an unresolved internal Palestinian divide”.

Forty-nine percent of Palestinians in Gaza are unemployed (65 percent for youth) and 70 percent of people rely on humanitarian aid to survive.

Under international humanitarian law, Israel as the occupying power is obliged to ensure that the social, economic and cultural rights and needs of the Palestinian population in the Gaza Strip and the occupied West Bank are provided for.

“Israel’s choice to use collective punishment to address the challenge posed by burning kites is immoral and illegal. As it is, humanitarian conditions in Gaza are deplorable, even dangerous,” a spokesperson from Gisha said.

“The harm inflicted on farmers in the south of Israel is both serious and lamentable, but harming Gaza’s residents is not going to fix it,” added the spokesperson.

“Israel’s distinction between ‘humanitarian’ and thus permitted items, as opposed to ‘less essential’ and therefore banned items, is as baseless as it is egregious; particularly given the devastating humanitarian situation already rampant in the Strip. It appears Israel is once again attempting to limit supplies to Gaza to a humanitarian minimum, as it did during the harshest periods of the closure.”

Among those hit hard is agricultural produce trader Ahmad al-Astel. He used to export four to five trucks daily of vegetables through Kerem Shalom to the occupied West Bank and Israel, but now his business has been brought to a standstill.

Al-Astal told to Al Jazeera that his produce will go to waste as the local market can only take 30 percent of the goods that were supposed to be exported outside of Gaza.

Storing produce in cold rooms is not an option either since the Strip only receives about four hours of electricity daily due to its power crisis.

The siege on Gaza began in 2007 as Israel imposed restrictions on the transfer of goods, permitting into the territory only what it defined to be as “vital for the survival of the civilian population”, a policy which Gisha has described as “economic warfare”.

Over the years Gaza’s three other crossings – nKarni, Sufa and Nahal Oz – used for the transfer of goods, construction materials and fuel shut down.

Abdul Hadi, the furniture business owner, said it has gradually become more difficult to keep his business afloat due to the siege.

Up until 2015 he used to export 20-30 trucks of furniture through Karem Shalom, but in recent years he said he exported only a truck or two every month due to increasing Israeli restrictions.

According to statistics from Gisha, the siege on Gaza tightened in June 2018.

The number of truckloads of goods that entered Gaza (6,819) last month was the lowest number recorded since July 2015. The number of fuel trucks also decreased from 560 in May to 487 in June 2018.

In June, about 149 truckloads of goods exited Gaza – little for a population of two million people and a fraction of the number that exited before the siege started in June 2007 (1,064 truckloads per month), Gisha noted.

Nahed Eid, vice chair of the Palestinian Information Technology Association, which coordinates a network of 42 tech companies, told Al Jazeera the organisation is at a loss of $4m – their running cost – due to their import of products that have been stuck at the border since last week.

“I am praying that this closure doesn’t last. There should be a separation between the political conflict and humanitarian issues in Gaza,” Eid said.

Al-Astal, the agricultural produce trader, is hopeful that the closure won’t last for long as he believes its consequences will be too devastating.

“My main concern is that the tradesmen who used to import my goods will not want to deal with me anymore in the future,” al-Astal said.

“They will start importing and exporting from Turkey instead of Gaza. Since the border has closed, we are not trusted anymore [for business] in their eyes.”