Europe’s Iron Curtain: The Refugee Crisis Is about to Worsen 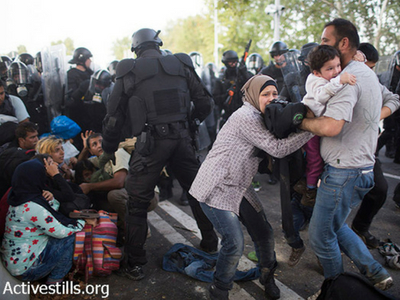 Hungarian policemen attack refugees during a protest in front a closed gate at the border with Serbia. (Photo: ActiveStills.org)

11 Jul 2018 – A recent European Council summit in Brussels was meant to articulate a united policy on the burgeoning refugees and migrant crisis. Instead, it served to highlight the bitter divisions among various European countries. Considering the gravity of the matter, Europe’s self-serving policies are set to worsen an already tragic situation.

Italy’s Interior Minister, Matteo Salvini, used more derogatory terms in explaining his country’s new policy on refugees and migrants.  “They will only see Italy on a postcard”, he said, referring to refugees who have been arriving in Italy with the help of humanitarian rescue boats.

The first of these boats, carrying over 600 refugees and economic migrants, the Aquarius, was sent back on June 11, followed by another, carrying over 200 refugees. When Italy carried out what then seemed like excessive action, the decision erupted into a massive political controversy between Italy, France, Spain, Malta, and others.

However, the pandemonium has subsided since then, as Italy’s Conte declared that, following the Brussels summit, his country ‘is no longer alone.’

What Conte, who presides over a populist, right-wing government, meant is that his country’s unwelcoming attitude towards refugees is now gathering greater European consensus.

The debate over refugees and migrants has reached the point that it has become a source of political instability in countries like Germany. The latter is not considered a ‘frontline state’, as in countries that are likely to be the first destination for refugees escaping war or poverty at home.

Austria and other countries are also caught up in the crisis, each with its own angry constituency to appease.

On paper, representatives of European countries did, in fact, reach an agreement. The real problem ensued as soon as delegations returned to their respective countries.

Despite opposition from Poland and Hungary, and Italian threats to ‘veto’ any text that is not consistent with Italian priorities, the Council agreed on four main points:

First, the establishment of disembarkation centers outside European territories, to be stationed mostly in North Africa. At that early stage, economic migrants would be separated from political asylum seekers.

This first stipulation is made hollow simply because, as the Guardian reports, “no North African country has agreed to host migrant centers to process refugee claims,” in the first place.

Aside from the questionable tactics of this pan-European border police, this system has been in use for years and it is difficult to imagine how ‘strengthening’ it will translate into a more efficient or humane border control system.

Third, the Council called for the creation of ‘controlled’ refugee and migrant processing centers within Europe itself, like the North African non-existing centers, to quickly separate between refugees fleeing strife and economic migrants.

This clause was offered as a ‘voluntary’ step to be exercised by any state as it sees fit, which, again, will hardly contribute to a united European policy on the issue. Yet, despite the voluntary nature of this provision, it still stirred a political controversy in Germany.

The German Chancellor is now under dual pressure, from within her fractious coalition, but also from without, a massive political campaign championed by the far-right party, the ‘Alternative for Germany’. In fact, the latter group’s popularity is largely attributed to its anti-immigrant sentiment.

A compromise was reached, calling for the establishment of migrant ‘transit centers’ at the German-Austrian border. However, instead of resolving a problem, the decision created another one, propelling a new controversy in Austria itself.

Austria, which also has its own populist, anti-immigrant constituency to placate, fears that the proximity of the German ‘transit centers’ would force it to receive Germany’s unwanted refugees.

“If Berlin introduced national measures, which would have a chain reaction, it could mean that Austria would have to react,” Austrian Chancellor Sebastian Kurz commented in a press conference. The magnitude of this ‘reaction’ is, of course, to be determined later, depending on the nature of counter-pressure emanating from Austria itself.

Austria has, in fact, already threatened to shut down the Brenner Pass, connecting Italy and Austria.

The fourth, and last, decision by the European Council called for the boosting of North African economies and offering training for Libya’s coastguard.

As altruistic as the last stipulation may sound, it is, indeed, the most ridiculous, especially since it was placed on the agenda with French enthusiasm. Even if one is to ignore France’s colonial history in Africa – grounded in the notion of usurping African resources under military threat – one can hardly ignore the current role that Emmanuel Macron is playing in the current Libyan conflict.

Various media reports suggest that Macron’s government is carrying on with the legacy of intervention, initiated by the government of Nicolas Sarkozy, most notably in the military intervention of March 2011.

Libya, a failed state par excellence, is now fighting proxy wars in which France and Italy are the main players.

Bearing that in mind, it would be absurd to suggest that Macron is keen on respecting the sovereignty and supporting the economies of Libya and other North African nations.

Considering Europe’s past failures and foot-dragging on the issue of refugees, it is hard to imagine that one of Europe’s greatest challenges is to be resolved as a result of the Brussels summit and its lackluster ‘agreement’.

Europe continues to view the refugee crisis in terms of security, populist pressures and national identity, as opposed to it being a global humanitarian crisis invited by wars, political strife and economic inequality. of which Europe is hardly innocent.

As long as Europe continues to operate with a skewed definition of the crisis, the crisis will continue to grow, leading to far dire consequences for all of those involved.

Romana Rubeo, an Italian writer, contributed to this article.