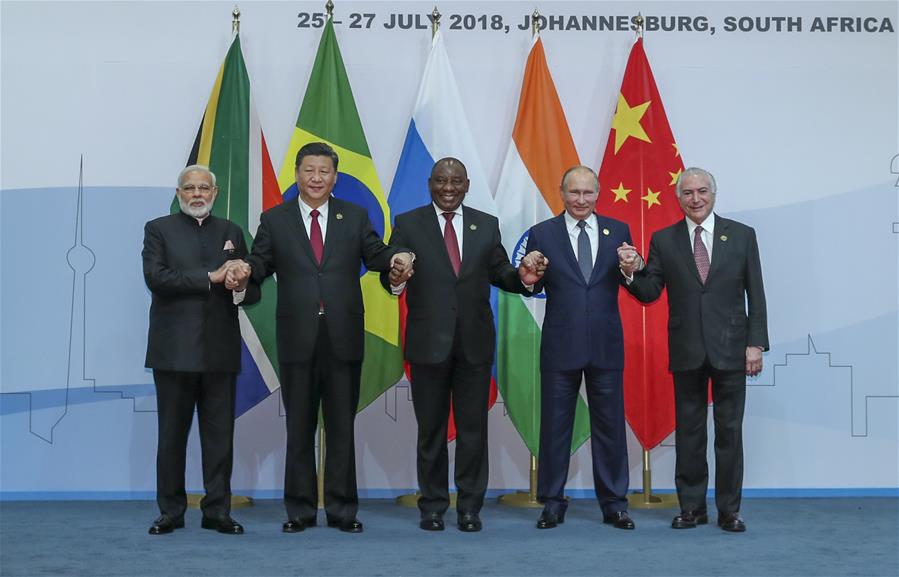 28 Jul 2018 – The 10th summit of Brazil, Russia, India, China and South Africa, or collectively BRICS, was held in Johannesburg from Wednesday to Friday [25-27 Jul], with the Johannesburg Declaration issued, mapping out a blueprint for the emerging-market bloc’s second “Golden Decade.”

The international community highly regarded the outcomes of the summit, saying that this summit marks that the BRICS countries are taking new steps in strengthening innovation and industrialization, sending a clear message for defending multilateralism and opposing trade protectionism, and it will further BRICS cooperation and play a key and positive role in boosting the world economic growth and improving global governance.

“For the BRICS as a whole, the strong emphasis on technology and the impact on manufacturing and employment was key in driving the group’s agenda forward,” said Cyril Prinsloo, a researcher at the South African Institute of International Affairs.

“There have been several important outcomes at this summit,” said Alissa Xinhe Wang, chair of BRICS Research Group based at the University of Toronto in Canada, adding that the establishment of the BRICS Partnership on New Industrial Revolution is a firm step made by the BRICS to catch the opportunities brought by the Fourth Industrial Revolution.

The BRICS mechanism has played a positive role in boosting the BRICS countries’ economies and international trade, said Ronnie Lins, director of the China-Brazil Center for Research and Business.

They will play a more important role in boosting global economic growth and establishing a new world financial and economic order in the future, he said.

In the Johannesburg Declaration issued on Thursday, BRICS leaders said that they will join hands to strengthen multilateralism and push for a fairer, more equal, more democratic and more representative world order.

Prinsloo believed that the Johannesburg Declaration reiterated the BRICS stance on the World Trade Organization (WTO) and expressed the BRICS resolve to strengthen the multilateral trade regime, which “signifies the BRICS intent in the face of increasing protectionism that threatens the global trading regime.”

“Over the past decade, the cooperation has matured and deepened. Presenting a unified voice and agenda on key issues impacting not only on BRICS, but equally (for) all countries globally, illustrates the BRICS’ commitment to forging a better world,” Prinsloo said.

It is encouraging that the BRICS countries have expressed their voice and joined hands to face challenges, said BRICS Business Council Co-Chair Onkar Kanwar.

BRICS Business Council Chair Iqbal Surve said that it is worrying that some countries install trade barriers and this act not only snuffs out healthy enterprises, but also hurts the ordinary people.

The BRICS Summit in Johannesburg has shown the world that the BRICS countries unanimously oppose trade protectionism and remain a powerful force for maintaining the multilateral trade system, Surve said.

Lins said that the BRICS countries have changed the long-standing dominance over the world by developed countries, and they also create a successful case for the developing countries to seek economic cooperation and enhance international influences.

Somadoda Fikeni, a political analyst with the University of South Africa, said that the BRICS Summit hosted by the African continent “means Africa is not going to be marginalized and its value will start being recognized.”

Fikeni expected that the BRICS’ New Development Bank will play a major role in the infrastructure development in Africa.

Nele Noesselt, a German professor at the University of Duisburg-Essen, said that this year’s BRICS Summit focused not only on the interests of emerging economies, but also on those interests of other countries.