The Massacre of Inn Din: How Rohingya Are Lynched and Held Responsible 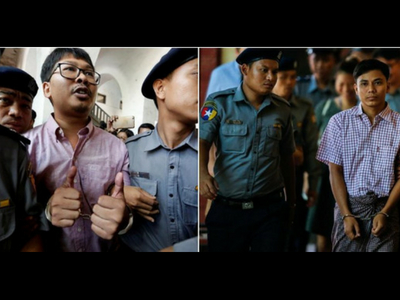 Myanmar is still detaining and prosecuting two Reuters journalists who attempted to uncover the extent of the army’s crimes. (Photo: File)

18 Jul 2018 – “In my four years as High Commissioner, I have heard many preposterous claims. That claim is almost in its own category of absurdity. Have you no shame, sir, have you no shame? We are not fools.”

These were some of the remarks made by outgoing United Nations High Commissioner for Human Rights, Zeid Ra’ad al-Hussein, in his final briefing to the Human Rights Council on July 4. He was responding to a Burmese official’s claim that his country is not targeting Rohingya in a genocidal campaign but is defending the rights of all its citizen.

The Burmese government is now at par with the Israeli government, both practicing ethnic-cleansing and murder while insisting that they are fighting terrorism.

In both Tel Aviv and Yangon, the two governments are cracking down on journalists who dare expose their phony democracies and ‘wars on terror’.

On June 18, the Israeli government endorsed a bill that seeks to criminalize filming of Israeli soldiers “for the sake of shaming them.” The language of the bill was purposely broad as it simply attempts to prevent the documenting of the violent practices of the Israeli army against Palestinians.

It should come as no surprise that Israel is one of the main suppliers of weapons to Burma.

Israel’s pseudo-democracy is also, in many ways, similar to Burma’s. In Israel, Jews are the privileged group; democracy and human rights apply to them and not to Palestinians.

In Burma, the Buddhist majority receives special treatment in comparison with the country’s minorities, especially the Rohingya who, for years, have been victim to a massive government-led campaign of genocide and ethnic cleansing.

Nearly 700,000 Rohingya Muslims were forced to flee from their homes in the Northern Rakhine State in Burma last year alone. They have been exiled mostly to Bangladesh. Many of the refugees are forced into deplorable existence in prison-like, extremely crowded refugee camps in the no man’s land between Burma and Bangladesh.

Even before the last exodus, hundreds of thousands of Rohingya were already living in exile, as the Burmese army’s ethnic cleansing of its ill-fated minorities has been in the making for years.

Despite a recent burst of media attention, however, Western governments, which are eagerly welcoming Burma’s former junta government to the ‘democratic world’ are yet to carry out any meaningful action, or even a threat of action to slow down the genocide.

In a recent report, Medecins Sans Frontieres (MSF) relayed the harrowing death toll of Rohingya during the first month of the army’s violent campaign last year. In the period between August 25 and September 24, at least 9,000 Rohingya were killed, including 730 children under the age of five, MSF reported.

When two brave Reuters journalists attempted to uncover the extent of the army’s crimes, they were arrested. On July 9, they were charged with the violation of a colonial-era law known as the ‘Official Secret Act’, and now face the possibility of spending 14 years behind bars.

Wa Lone, 32 and Kyaw Soe Oo, 28, are heroic young journalists, for they knew what fate awaited them should the government uncover their investigation of a massacre committed in the village of Inn Din on September 2.

On that day, 10 Rohingya men were executed in cold blood. Two were hacked to death by Buddhist villagers and the remaining eight were shot by the army. Their mass grave was dug in advance, where their frail bodies were dumped near their village, after homes in the village were set ablaze.

That story, although horrific, is quite typical in Rakhine State, where whole families were shot by soldiers or hacked to death by mobs. The two brave journalists were documenting this single episode with a thorough investigation based on government papers, interviews with Buddhist villagers and security personnel. Their reporting was meant to provide indisputable evidence of government-mob synchronization in killing Rohingya and covering up their crimes.

Despite the arrest of their colleagues, the Reuters staff in Burma and Bangladesh still managed to produce an exhaustive investigative report that details how the army’s 33rd and 99th light infantry divisions were used as a “tip of the spear” in the savage government campaign to ethnically-cleanse the nearly 700,000 Rohingya last year.

The report also discusses the culture of impunity that is now rampant in that country.

“Are you going to eat Bengali meat?” a Facebook friend asks a soldier, Kyi Nyan Lynn, who was getting ready to join the onslaught in Rakhine.

The ‘Bengali meat’ refers to the killing of Rohingya, who are also often referred to by the derogatory term ‘kalar.’

The soldier made sure to keep his friends abreast on the bloody development on the ground.

“If they’re Bengali, they’ll be killed,” he posted a comment on August 11.

Although the government remains very guarded regarding its slaughter of Rohingya, Buddhist activists on social media have no qualms in sharing their racist views, violent images and details of the mass murder.

However, the Massacre of Inn Din, thanks to the work of the two journalists, forced the government to ‘investigate’. It shared the results of its alleged investigation on Facebook on January 10.

Although the government acknowledged that the 10 Rohingya men were executed by the army and a Buddhist mob, it largely placed the blame on the murdered men.

In a jumbled-up statement, the government’s ‘Truth Team,” wrote:

“It was found that local ethnics had grievance against those 10 Bengali terrorists involved in the terror attacks against Bengali villagers, who arrested and killed U Maung Ni without reason, and they threatened and bullied the local ethnics. So the ethnics killed 10 arrested Bengali terrorists as they were keen to kill the arrestees with taking revenge.”

Burma’s killing campaigns are now impossible to hide, and no clumsy government attempts at cover-up will conceal the facts. The real tragedy is that the rest of the world looks on as if nothing is the matter.

How long do the Rohingya have to endure before something is done to alleviate their suffering?