In a Counter World – Hug a Fascist 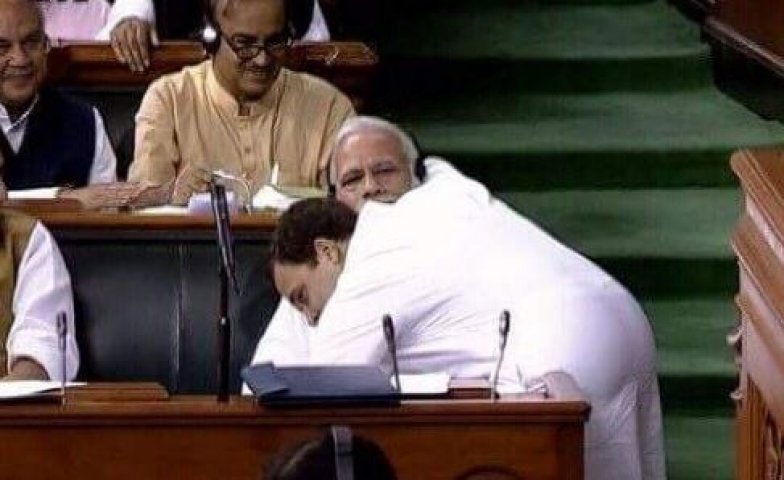 30 Jul 2018 – It is a well known fact that India’s Prime Minister Narendra Modi has scant respect for democratic processes.  He rarely attends the parliament. He has spent more days abroad than in the parliament. In the last four years he has made several times more public speeches than he gave in the parliament. He has never addressed a press conference as a Prime Minister in India. His mode of communication to his countrymen, apart from his rhetorical public speeches, is twitter and his monthly radio speeches called ‘Man ki Baat’.

Coming from a former RSS pracharak it is something not to be surprised. The RSS, the parent organisation of the ruling Bharatiya Janata Party (BJP) was born in 1925 out of marriage with Hindu nationalist ideologies propounded by BS Moonje and VD Savarkar who adored Hitler and Mussolini. B.S.Moonje had a personal audience with Mussolini on March 19, 1931., in Palazzo Venzia, the headquarters of the Fascist government. He visited Italy’s Central Military School of Physical Education, the fascist academy of Physical Education and Balilla and Avanguardisti, organisations.

Moonje came back to India and helped K.S Hedgewar to found the semi fascist organization Rashtriya Swayam Sevak Sangh (RSS). RSS is said to be a cultural organization which has a membership of about five million. If taken by numbers RSS is the largest fascist organization in the world. After its founding RSS started setting up physical training centers for youth called ‘Shakhas’, some of which even give training in fire arms. Their fascist designs came to the fore when a RSS member Nathuram Godse gunned down, father of the nation Mahatma Gandhi. RSS was banned shortly afterwards.

BJP is the political arm of RSS and Prime Minister Narendra Modi is a former full time pracharak of the RSS. His core values are that of RSS. He has proven that he’s primarily a RSS pracharak then only a state functionary,  especially during the 2002 pogrom against Muslims in Gujarat, when he was the Chief Minister of the state. He never ever showed least bit of remorse for the genocide of Muslims led by organized mobs led by RSS activists.

A year after assuming office Narendra Modi’s shock therapy shook the nation to the core. On 8 November, 2016 Modi in a televised address told the nation that high valued notes of Rs 500, Rs 1000 will cease as legal tenders from midnight onwards. What followed was a mayhem. About 200 people lost lives directly due to demonetization. Millions of workers lost their jobs. The country has not recovered from that shock even now. Even for wrecking the nation, Modi has not shown any remorse or empathized with the common people.

Modi by his political ideology and his governance track record is a personification of a true-blue fascist.

Even hard core fascists can be shocked. For Modi, that day came on the afternoon of July 20. In a blistering speech Congress President Rahul Gandhi tore apart the Modi government. He laid bare Modi’s election promise to the youth of India to provide millions of jobs, the betraying of farmers, traders and the artisans. He then asked PM to explain to the country why a ₹45,000-crore contract was taken away from the state-owned Hindustan Aeronautics Limited (HAL) and handed over to a “corporate friend” who had “never, ever built an airplane and had a debt of ₹35,000 crore”.

He then said that BJP’s politics is driven by hate. He said that Modi and his friends mock him as Pappu (a byword for a good for nothing fellow) but he has no hatred toward Modi or BJP. Rahul Gandhi then walked nonchalantly up the isle of the parliament and hugged Modi. A bewildered Modi took some time to respond. When he understood what had happened, he called Mr. Gandhi and gave him a patronizing tap on his shoulder. The job was done and the un-caged lion was cornered!

Rahul Gandhi’s hug has a magnanimous meaning for the world. Hate mongers should be countered by love. The physical touch has very significant importance in physical interaction. Only people who love or hate touch each other. A loving touch or a violent slap!  In a Counter World, the violent hate mongers should be physically hugged lovingly by peace mongers. From the lynching mobs of India who kill people for their food habits to the violent thug at the White House who separate children from the parents should be hugged lovingly.  We should remember that fascists are a minority. If all the sane headed peace mongers hugged the violent fascists, as John Lennon sang, “And the world will live as one”. So go out and hug a fascist.