The Useful Idiocy of Donald Trump 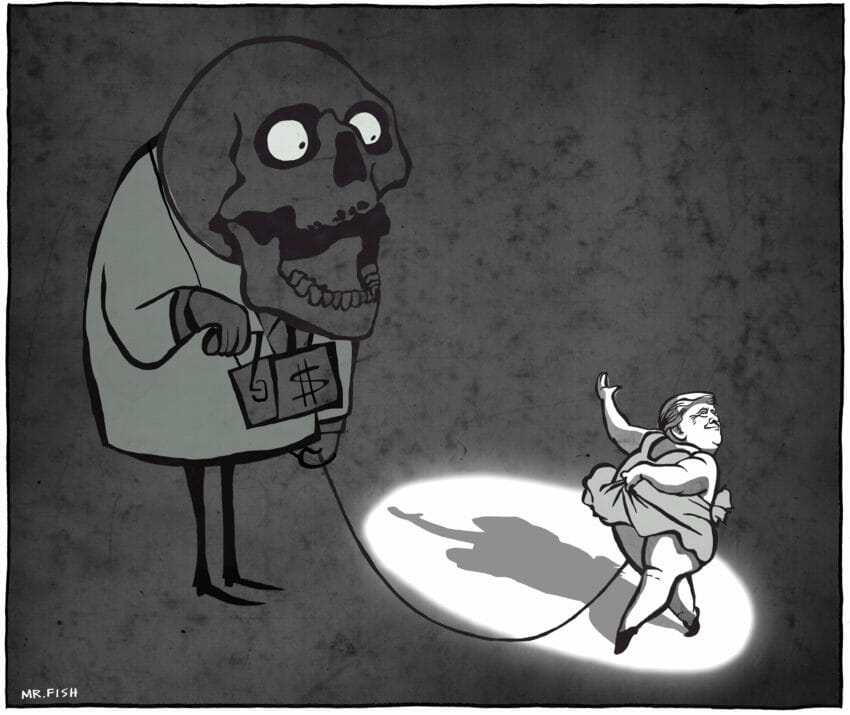 5 Aug 2018 – The problem with Donald Trump is not that he is imbecilic and inept—it is that he has surrendered total power to the oligarchic and military elites. They get what they want. They do what they want. Although the president is a one-man wrecking crew aimed at democratic norms and institutions, although he has turned the United States into a laughingstock around the globe, our national crisis is embodied not in Trump but the corporate state’s now unfettered pillage.

Trump, who has no inclination or ability to govern, has handed the machinery of government over to the bankers, corporate executives, right-wing think tanks, intelligence chiefs and generals. They are eradicating the few regulations and laws that inhibited a naked kleptocracy. They are dynamiting the institutions, including the State Department, that served interests other than corporate profit and are stacking the courts with right-wing, corporate-controlled ideologues. Trump provides the daily entertainment; the elites handle the business of looting, exploiting and destroying.

Once democratic institutions are hollowed out, a process begun before the election of Trump, despotism is inevitable. The press is shackled. Corruption and theft take place on a massive scale. The rights and needs of citizens are irrelevant. Dissent is criminalized. Militarized police monitor, seize and detain Americans without probable cause. The rituals of democracy become farce. This is the road we are traveling. It is a road that leads to internal collapse and tyranny, and we are very far down it.

The elites’ moral and intellectual vacuum produced Trump. They too are con artists. They are slicker than he at selling the lies and more adept at disguising their greed through absurd ideologies such as neoliberalism and globalization, but they belong to the same criminal class and share many of the pathologies that characterize Trump. The grotesque visage of Trump is the true face of politicians such as George W. Bush, Bill and Hillary Clinton and Barack Obama. The Clintons and Obama, unlike Bush and Trump, are self-aware and therefore cynical, but all lack a moral compass. As Michael Wolff writes in “Fire and Fury: Inside the Trump White House,” the president has “no scruples.” He lives “outside the rules” and is “contemptuous of them.” And this makes him identical to those he has replaced, not different. “A close Trump friend who was also a good Bill Clinton friend found them eerily similar—except that Clinton had a respectable front and Trump did not,” Wolff writes.

Trump, backed by the most retrograde elements of corporate capitalism, including Robert and Rebekah Mercer, Sheldon Adelson and Carl Icahn, is the fool who prances at the front of our death march. As natural resources become scarce and the wealth of the empire evaporates, a shackled population will be forced to work harder for less. State revenues will be squandered in grandiose projects and futile wars in an attempt to return the empire to a mythical golden age. The decision to slash corporate tax rates for the rich while increasing an already bloated military budget by $54 billion is typical of decayed civilizations. Empires expand beyond their capacity to sustain themselves and then go bankrupt. The Sumerian, Egyptian, Greek, Roman, Mayan, Khmer, Ottoman and Austro-Hungarian empires all imploded in a similar fashion. The lessons of history are clear. But the illiterate charlatans who seize power in the dying days of empire know nothing of history. They are driven by a primal and inchoate lust for wealth, one that is never satisfied no matter how many billions they possess.

The elites in dying cultures turn everything into a commodity. Human beings are commodities. The natural world is a commodity. Government and democratic institutions are commodities. All are mined and wrecked for profit. Nothing has an intrinsic value. Nothing is sacred. The relentless and suicidal drive to accumulate greater and greater wealth by destroying the systems that sustain life is idolatry. It ignores the biblical injunction that idols always begin by demanding human sacrifice and end by demanding self-sacrifice. The elites are not only building our funeral pyre, they are building their own.

The elites, lacking a vision beyond satiating their own greed, revel in the intoxicating power to destroy. They confuse destruction with creation. They are agents of what Sigmund Freud calls the death instinct. They find in acts of national self-immolation a godlike power. They denigrate empathy, intellectual curiosity, artistic expression and the common good, virtues that sustain life. They celebrate a hyper-individualism embodied in celebrity, wealth, hedonism, manipulation and the ability to dominate others. They know nothing of the past. They do not think about the future. Those around them are temporarily useful to their aims and must be flattered and rewarded but in the end are ruthlessly cast aside. There is no human connection. This emotional numbness lies at the core of Trump’s personality.

“[Stephen] Bannon described Trump as a simple machine,” Wolff writes. “The On switch was full of flattery, the Off switch full of calumny. The flattery was dripping, slavish, cast in ultimate superlatives, and entirely disconnected from reality: so-and-so was the best, the most incredible, the ne plus ultra, the eternal. The calumny was angry, bitter, resentful, ever a casting out and closing of the iron door.”

The elites in a dying culture confuse what the economist Karl Polanyi calls “real” and “fictitious” commodities. A commodity is a product manufactured for sale. The ecosystem, labor and money, therefore, are not commodities. Once these fictitious commodities are treated as real ones for exploitation and manipulation, Polanyi writes, human society devours itself. Workers become dehumanized cogs. Currency and trade are manipulated by speculators, wreaking havoc with the economy and leading to financial collapse. The natural world is turned into a toxic wasteland. The elites, as the society breaks down, retreat into protected enclaves where they have access to security and services denied to the wider population. They last longer than those outside their gates, but the tsunami of destruction they orchestrate does not spare them.

As long as Trump serves the interests of the elites he will remain president. If, for some reason, he is unable to serve these interests he will disappear. Wolff notes in the book that after his election there was “a surprising and sudden business and Wall Street affinity for Trump.” He went on: “An antiregulatory White House and the promise of tax reform outweighed the prospect of disruptive tweeting and other forms of Trump chaos; besides, the market had not stopped climbing since November 9, the day after the election.”

The Russia investigation—launched when Robert Mueller became special counsel in May and which appears to be focused on money laundering, fraud and shady business practices, things that have always characterized Trump’s financial empire—is unlikely to unseat the president. He will not be impeached for mental incompetence, over the emoluments clause or for obstruction of justice, although he is guilty on all these counts. He is useful to those who hold real power in the corporate state, however much they would like to domesticate him.

Trump, as Wolff describes him in the book, is clueless about what he has unleashed. He is uninterested in and bored by the complexities of governance and policy. The faster Trump finds a member of the oligarchy or the military to take a job off his hands the happier he becomes. This suits his desires. It suits the desires of those who manage the corporate state. For the president there is only one real concern, the tumultuous Trump White House reality show and how it plays out on television. He is a creature solely concerned with image, or more exactly his image. Nothing else matters.

“For each of his enemies—and, actually, for each of his friends—the issue for him came down, in many ways, to their personal press plan,” Wolff writes of the president. “Trump assumed everybody wanted his or her fifteen minutes and that everybody had a press strategy for when they got them. If you couldn’t get press directly for yourself, you became a leaker. There was no happenstance news, in Trump’s view. All news was manipulated and designed, planned and planted. All news was to some extent fake—he understood that very well, because he himself had faked it so many times in his career. This was why he had so naturally cottoned to the ‘fake news’ label. ‘I’ve made stuff up forever, and they always print it,’ he bragged.”

Yes, the elites wish Trump would act more presidential. It would help the brand. But all attempts by the elites to make Trump conform to the outward norms embraced by most public officials have failed. Trump will not be reformed by criticism from the establishment. Republican Sens. Jeff Flake of Arizona and Bob Corker of Tennessee, who denounced Trump, saw their approval ratings plummet and have decided not to run for re-election. Trump may have public approval of only 39 percent overall, but among Republicans the figure is 78 percent. And I don’t think those numbers will decrease.

The inability of the political establishment and the press to moderate or reform Trump’s egregious behavior is rooted in their loss of credibility. The press, along with political and intellectual elites, spent decades championing economic and political policies that solidified corporate power and betrayed and impoverished American workers. The hypocrisy and mendacity of the elites left them despised and distrusted by the victims of deindustrialization and austerity programs. The attempt to restore civility to public discourse and competency to political office is, therefore, fruitless. Liberal and establishment institutions, including the leadership of the two main political parties, academia and the press, squandered their moral authority. And the dogged refusal by the elites to address the engine of discontent—social inequality—ensures that they will remain ineffectual. They lay down the asphalt for the buffoonery of Trump and the coming tyranny.