By maintaining an ISIS pocket in the territory it occupies, the U.S. can continue to justify its illegal presence in the country for the long-term, ultimately substituting Iran for ISIS as its new regional boogeyman. 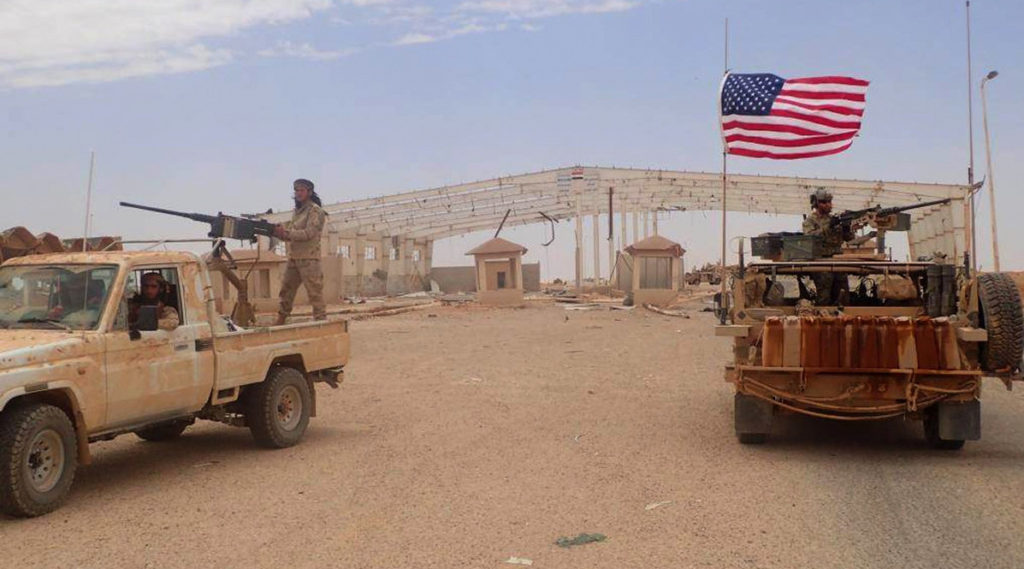 A U.S.-backed anti-government fighter mans a heavy automatic machine gun, left, next to an American soldier as they take their positions at Tanf, a border crossing between Syria and Iraq.
Hammurabi’s Justice News | AP

16 Aug 2018 –— A recent report from the UN Security Council’s Sanctions Monitoring Team has found that many of the places in Syria where the terror group Daesh (ISIS) continues to operate, recuperate and extract oil for profit are in areas of the country occupied by the United States.

According to the report’s executive summary:

“Islamic State in Iraq and the Levant (ISIL), having been defeated militarily in Iraq and most of the Syrian Arab Republic during 2017, rallied in early 2018 [owing to] a loss of momentum by forces fighting it in the east of the Syrian Arab Republic, which prolonged access by ISIL to resources and gave it breathing space to prepare for the next phase of its evolution into a global covert network.”

While the text itself doesn’t explicitly state who controls these areas of Syrian territory, maps of eastern Syria make it clear that the pockets of Daesh within U.S.-controlled territory have remained unchanged in size since November 2017 while the Daesh pockets in the Syrian government-controlled portion of eastern Syria have shrunk considerably since last November. 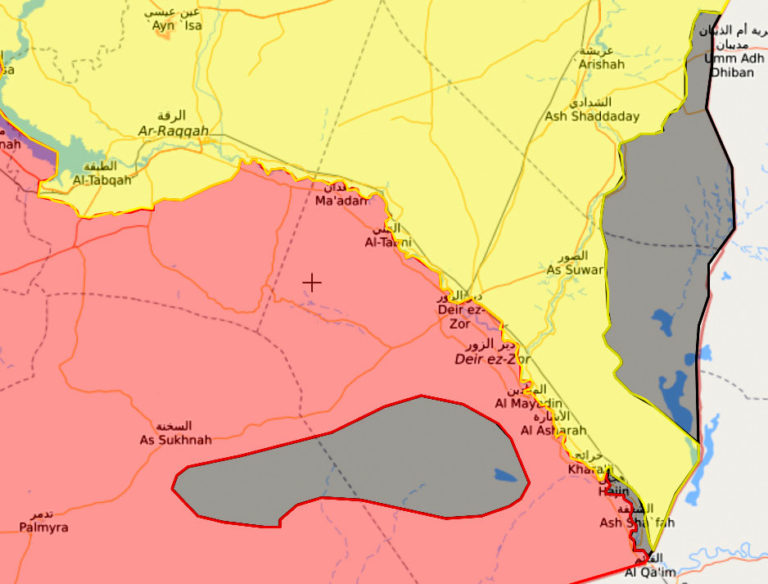 A map of the territory held by ISIS (grey) at the Syrian-Iraqi border in the U.S. controlled zone north of the Euphrates (yellow). April 24, 2018. Source | Syria Live Map

Furthermore, the UN report states that the areas where Daesh has rallied since the year began are located in “pockets of territory in the Syrian Arab Republic on the Iraqi border” where the group has mounted “attacks, including across the border into Iraq.” Again, area maps clearly show that the Daesh-controlled areas in only the U.S.-occupied portion of eastern Syria are along the Syria-Iraq border.

Notably, in the sliver of Daesh-controlled land between U.S. and Syrian government-controlled areas in the border city of Abu Kamal, when the Syrian Arab Army (SAA) has tried to attack Daesh positions in the area this year, they have been targeted by U.S. coalition airstrikes. U.S. coalition airstrikes have also attacked Syrian civilian villages in the government-controlled portion of Abu Kamal. Survivors of that attack claimed that their villages had been targeted for refusing the entry of the U.S.-backed opposition militias — such as the Qasad militia, which is largely composed of former Daesh fighters.

U.S. coalition airstrikes targeting the SAA in Abu Kamal and elsewhere in eastern Syria have also been the key cause of the “loss of momentum” of forces fighting Daesh that was cited in the UN report, as Syrian forces have declined to advance deep into U.S.-held territory in order to pursue Daesh after being bombed numerous times. In addition, the U.S.’ own bombing campaign against Daesh can hardly be called effective given that the U.S., along with their military proxy the Syrian Democratic Forces (SDF), frequently announce on social media when and where they will be bombing Daesh in eastern Syria days in advance.

Beyond eastern Syria, the report also notes that another Daesh-infested area of concern is also located farther south in the area around the al-Tanf military base, which has been occupied by the United States since 2016. The UN report raises concerns about the Rukban refugee camp, which lies within the so-called “deconfliction” zone that the U.S. has imposed on a 55-kilometer radius around al-Tanf.

As with other Daesh-held areas under U.S. “protection,” the U.S. has attacked the SAA for attempting to enter the U.S.’ unilaterally-imposed “deconfliction” zone in an effort to attack Daesh militants.

The evidence that the U.S. presence in Syria is actually helping to strengthen Daesh flies in the face of the Pentagon’s justification for the U.S.’ occupation of northeastern Syria as being necessary because the Syrian government is not strong enough to defeat Daesh on its own. However, as the recent UN report reveals, the Pentagon’s portrayal does not appear to be the reality of the situation.

As MintPress has noted in the past, this finding is hardly surprising given that the Defense Intelligence Agency report from 2012 revealed that the U.S. willingly allowed Daesh to be formed in order to destabilize the Syrian government and partition Syria through foreign military intervention. Since then, the U.S. has adapted its justifications for its presence in Syria, particularly after the failure of Daesh and foreign-funded opposition groups to depose the current government of Syria.

By maintaining a Daesh pocket in the territory it occupies, the U.S. can continue to justify its illegal presence in the country for the long-term. Indeed, just last month, the Trump administration made it clear that the U.S. military plans to stay in Syria for the long haul, substituting Iran for Daesh as its new regional boogeyman.