Banned Weapons Used in All US War Theaters 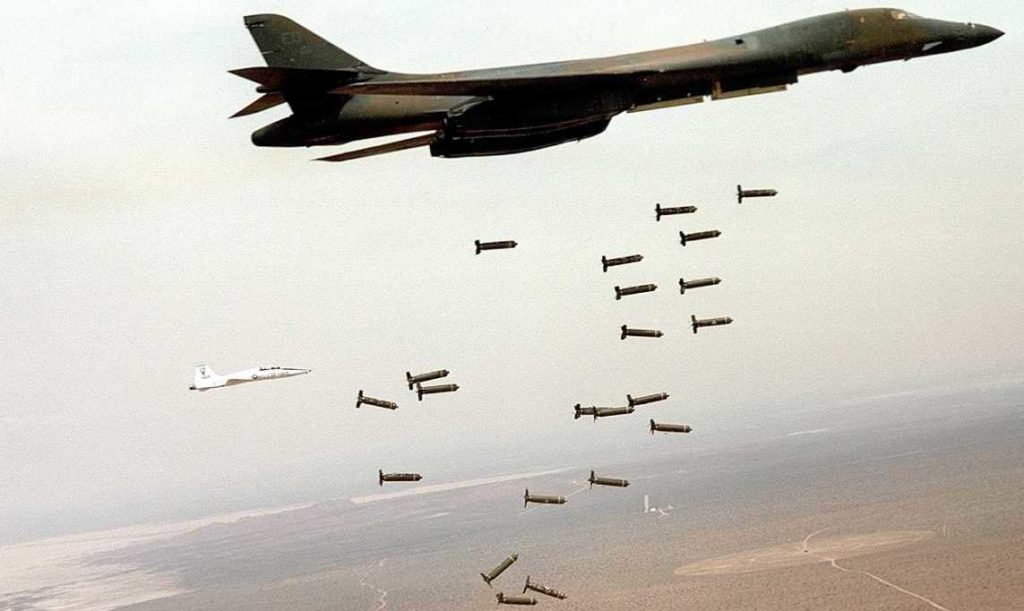 18 Oct 2018 – Whenever US forces aggressively attacks countries, dirty war is waged, including use of banned weapons.

The Laws of War: Laws and Customs of War on Land (1907 Hague IV Convention) states:

Article 25: “The attack or bombardment, by whatever means, of towns, villages, dwellings, or buildings which are undefended is prohibited.”

Article 26: “The officer in command of an attacking force must, before commencing a bombardment, except in cases of assault, do all in his power to warn the authorities.”

Article 27: “In sieges and bombardments, all necessary steps must be taken to spare, as far as possible, buildings dedicated to religion, art, science, or charitable purposes, historic monuments, hospitals, and places where the sick and wounded are collected, provided they are not being used at the time for military purposes.”

Fourth Geneva protects civilians in time of war. It prohibits violence of any type against them, requiring treatment for the sick and wounded.

In September 1938, a unanimously adopted League of Nations resolution prohibited the “bombardment of cities, towns, villages, dwellings or buildings not in the immediate neighborhood of the operations of land forces.”

“In cases where [legitimate targets] are so situated, [aircraft] must abstain from bombardment” if it indiscriminately harms civilians.

These include “inhumane acts committed against any civilian populations, before or during the war,” including indiscriminate killing and “wanton destruction of cities, towns, or villages, or devastation not justified by military necessity.”

US forces used banned weapons during and since WW II. Illegal incendiary and cluster munitions were used against German and Japanese forces.

In February 1945, three months before war against Nazi Germany ended, US and UK heavy bombers used thousands of tons of high-explosive and illegal incendiary weapons against Dresden, creating a firestorm, an act of barbarism against the defenseless city, massacring 100,000 or more Germans, mainly civilians.

In February 1945, US warplanes firebombed Tokyo when war in the Pacific was effectively won, Japan at the time willing to surrender unconditionally provided its emperor was retained.

The overture was declined by Franklin Roosevelt, later by Harry Truman before formally accepting Japanese surrender on September 2 aboard the USS Missouri.

Ahead of war’s end in August 1945 with Japan defeated, Hiroshima and Nagasaki were gratuitously nuked, hundreds of thousands killed or harmed by nuclear radiation, mostly civilians.

During Truman’s aggression on North Korea, US forces used biological and other banned weapons.

Anything goes, terror war was waged on the country, killing three or four million people, destroying most of it.

Since the 1991 Gulf War, illegal depleted uranium (DU) weapons were used. The 1925 Geneva Protocol and succeeding Geneva Weapons Conventions prohibited use of chemical and biological agents in any form as weapons of war.

The 1907 Hague Convention banned use of any “poison or poisoned weapons.”

DU munitions are radioactive, chemically toxic and poisonous. America is a signatory to the Hague and Geneva Conventions. Using these weapons in combat is a war crime.

In all post-9/11 wars, US forces used banned chemical, biological, radiological, incendiary and cluster munitions. They’re still used in all US war theaters.

According to the Syria Arab News Agency (SANA), “The US-led coalition bombed several areas in the town of Hajin, 110km east of the city of Deir Ezzor, with internationally forbidden white phosphorous bombs”—on the phony pretext of combating ISIS the US created and supports, as well as al-Qaeda and other terrorist groups.

According to Russia’s Defense Ministry, US-led forces in Syria used banned white phosphorous bombs in earlier airstrikes—including during the rape and destruction of Raqqa, massacring countless thousands of civilians, destroying most of the city, a high crime of war and against humanity.

A Pentagon statement lied, saying, “As a matter of policy, the coalition will not publicly discuss the use of specific weapons and munitions in operations.”

“However, every weapons system in the US inventory undergoes a legal review to ensure the weapon complies with the Law of Armed Conflict.”

In all US wars since the misnamed “good war” against Nazi Germany and imperial Japan, US forces used banned weapons.

Pentagon claims otherwise are false, issued to try concealing its war crimes in all US war theaters—naked aggression waged in them all from Korea to post-9/11 conflicts.