The United States Did It Again: Its Warplanes Use White Phosphorous Munitions in Syria 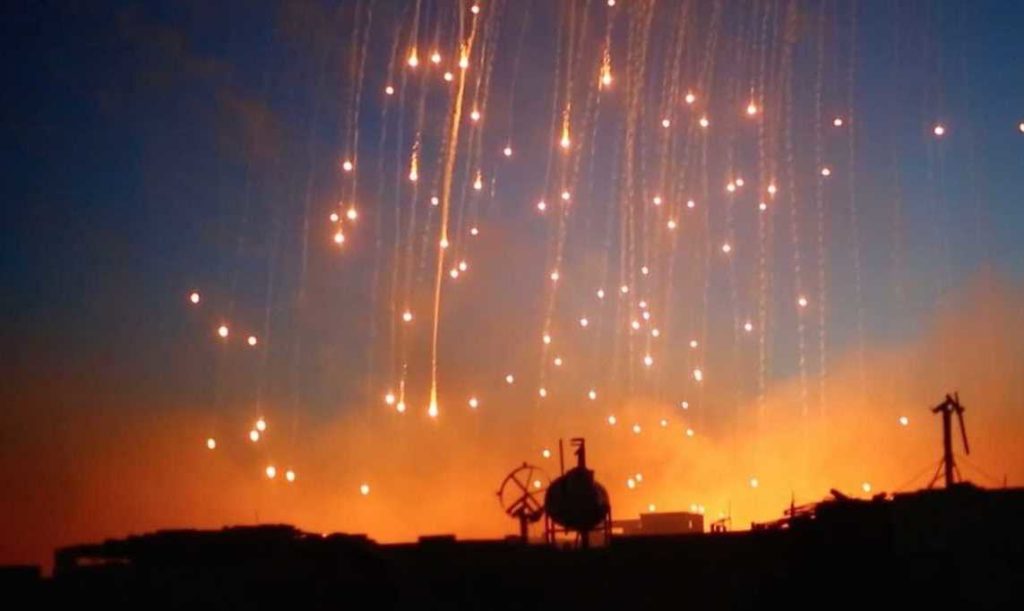 14 Oct 2018 – The US-led coalition used white phosphorus (WP) munitions while delivering air strikes against the Syrian province of Deir Ez-Zor on Oct. 13. The attack resulted in civilian casualties. Last month, WP munitions were also used by two US Air Force (USAF) F-15s in an attack on the town of Hajin in Deir-ez-Zor. The Syrian government has repeatedly condemned the US-led coalition, which claims that the need to fight ISIS justifies its military actions, while denying the fact it is using white phosphorous projectiles.

WP does not fall under the category of the chemical weapons that are banned by the Chemical Weapons Convention, but it is an incendiary weapon. As such, it cannot be used against non-combatants. Protocol III of the Convention on Certain Conventional Weapons

“prohibits the use of said incendiary weapons against civilians (already forbidden by the Geneva Conventions) or in civilian areas.”

The substance ignites spontaneously upon contact with air, producing a dense white smoke. The heat can reach 800-900°C. No water will help. Severe injuries to internal organs could be caused when absorbed through the skin, ingested, or inhaled. Burning particles of white phosphorus produce thermal and chemical burns if they come into contact with the skin.

And Syria is not the only place where the US has used WP munitions. White phosphorous artillery shells were used in Iraq during the assault on Fallujah in 2004. The US admitted that fact. There have also been media reports about the use of WP in Mosul, Iraq and Raqqa, Syria. Last year, the Washington Post published photographs of US Marines equipped with white phosphorus projectiles that were to be used in the battle for Raqqa. The source offered similar pictures showing WP munitions with US Army units outside Iraqi Mosul.

“No matter how white phosphorus is used, it poses a high risk of horrific and long-lasting harm in crowded cities like Raqqa and Mosul and any other areas with concentrations of civilians.”

In 2015, the United States used depleted uranium (DU) in Syria. DU is not banned by any international treaty but its use is against International Humanitarian Law (IHW). Article 36 of the Additional Protocol I to the Geneva Conventions requires combatants to ensure that “any new weapon means or method of warfare does not contravene existing rules of international law.” It states,

“General principles of the laws of war/IHL prohibit weapons and means or methods of warfare that cause superfluous injury or unnecessary suffering, have indiscriminate effects or cause widespread, long-term and severe damage to the natural environment.”

In 2012, the UN General Assembly tried to adopt a resolution restricting the use of DU. The move was supported by 155 states, with 27 abstaining and four, including the United States, voting against the measure.

The American military has used cluster bombs against civilians in Yemen. The US is not one of the 102 states that are signatories to the 2008 Convention on Cluster Munitions, which prohibits weapons that open in the air, dispersing multiple bomblets or submunitions over a wide area. Many submunitions fail to explode on initial impact, acting as landmines for years.

The US continues to run biological programs, operating more than 20 laboratories around the world in blatant violation of the UN Biological Weapons Convention. An opinion paper published on Oct. 4 in the journal Science, written by an international group of researchers, claims that the US Defense Advanced Research Projects Agency (DARPA) is potentially developing insects as a means of delivering a “new class of biological weapon.”

In 2011, US police used tear gas and other chemical irritants against Occupy protesters. Tear gas is prohibited for use in battle against enemy soldiers by the Chemical Weapons Convention, but it’s all right with America’s law-enforcement agencies using that dangerous substance against their own people.

There is no justification for using WP at a time when ISIS has been reduced to insignificance in Syria, but Washington did it again. It violated international law after having unilaterally imposed sanctions on Russia without any evidence to support its accusations. It should also be remembered that, unlike Russia, the US has thus far failed to meet its obligations and destroy its stockpile of chemical weapons. The use of such substances to harm civilians is a serious matter that should be addressed at the ongoing 79th session of the UN General Assembly. America’s noncompliance with generally accepted norms is the most critical problem on the international security agenda.

Peter Korzun is an expert on wars and conflicts.