The Sharpeville Massacre in South Africa sparked international outrage. And then there’s Gaza, and Nauru and Yemen.

6 Nov 2018 – Seventy years ago, at the United Nations, every effort was made to define and outlaw acts of cruelty. Wanton cruelty referred to conduct without regard to what is right, just or humane. Article 5 of the 1948 Universal Declaration of Human Rights decreed, ‘No-one shall be subjected to torture, or to cruel, inhuman or degrading treatment or punishment.’

The Convention on the Rights of the Child, ratified by the General Assembly on November 20 1989, had similar aspirations.

Those rules and standards seem to have been forgotten or disregarded.

An Orwellian facility for doublespeak enables leaders to pretend compassion yet maintain their cruelty. As thousands of Australians demonstrated against their government’s continued containment of children on Nauru, Prime Minister Morrison reassured himself that he was filled with compassion. No surprise. In his maiden speech in the Federal parliament he had extolled Christian virtues – ‘loving kindness, justice and righteousness.’ Denial and deceit facilitate cruelty.

The Prime Minister dismissed the calls of the AMA and almost 6,000 individual doctors who had called for the removal of all children from off-shore detention centres because of their deteriorating health. MSF and UNHCR argued that everyone, including single adults should be evacuated from Nauru and Manus. Nevertheless, in order to appear strong, the Prime Minister said that his border protection policies were non-negotiable, hence his rejection of a New Zealand offer to take at least 150 asylum seekers. 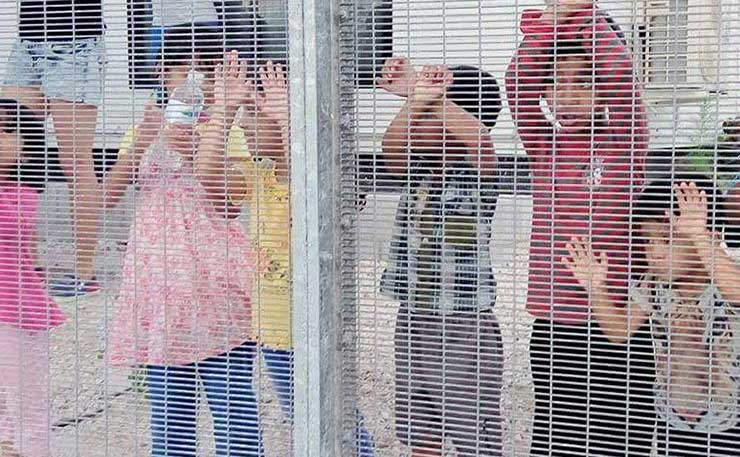 Children locked up in immigration detention on Nauru, August 2016.
This image is courtesy of Mums 4 Refugees.

After five years of incarceration on those islands, there has at least been public outrage at the cruelty inherent in the government’s asylum seeker policies. The same can’t be said about responses to the war in Yemen.

Armed to the teeth by western powers, Saudi Arabia, infamous for beheadings, floggings, amputations, the Jamal Kashoggi murder and endless brutalities in Yemen, knows cruelty as the way to rule. President Trump of the trade-always-trumps-human-rights-attitude, the Saudis’ arms sales ally, wants to avoid offending the Saudis so he shoulder-shrugs at the devastation in Yemen.

UNICEF says of that war-torn country that this is one of the worst places in the world to be a child. Save The Children has reported that 130 children were dying each day and that almost 2 million Yemeni children were acutely malnourished. UNICEF identified 11 million children – nearly half of the population of Australia – in dire need of food, medical treatment, education, water and sanitation. As long as cruelty is tolerated anywhere, who really cares about dying Yemeni? 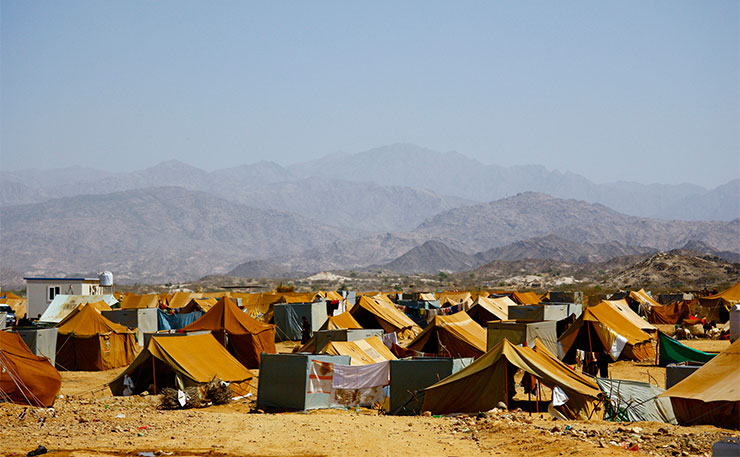 Mazrak camp in the tough mountainous scrublands of Yemen’s north-west border with Saudi Arabia is now home to more than 10,000 people displaced by the escalating war between the government and rebels from the Houthi clan. (IMAGE: Annasofie Flamand, IRIN, Flickr)

Orwellian doublespeak allied to arms trading and other commercial interests explains the cruelty which feeds on indifference to international laws and enables wars to persist.

There is another cause.

Cowardly leaders have been reluctant to take a stand on those human rights principles over which a former Australian Foreign Minister presided, when they were proposed at the UN in 1948. The visionary values of Dr. Herb Evatt are no longer visible in an international community so anaesthetized by atrocities that they appear to have lost any semblance of the nerve and insistence on principle which Evatt demonstrated.

Silence in response to slaughter at the Gaza border is a recurring illustration of international no-comment-cowardice, though, by contrast, there has been an admirable solidarity in outrage at the massacre of Jewish worshippers in that Pittsburgh synagogue. But if slaughtered victims are Palestinians, who cares?

A few distinguished Israelis care. A few months ago, when 100 Gazans had been shot by Israeli snipers, nine prominent and respected Israelis compared the shootings of Palestinians to the Sharpeville massacre of 1960, when 69 South Africans who were protesting that country’s Apartheid laws were shot dead by government forces. The Israelis said of the Gaza killings, “None of the demonstrators posed any direct danger to the state of Israel or to its citizens.” They called on “decent members of the international community to act by demanding that those who commanded such shootings be investigated and tried.”

‘Decent members of the international community’ seem to have been asleep. International reaction to the Sharpeville shootings was starkly different from responses to the slaughters at the Gazan border. Sharpeville was followed by massive international protests which became the catalyst for mounting opposition to the Apartheid regime. Even as the Gaza killings reached 220 with many thousands maimed, many for life, international outrage was so muted it could barely be heard.

In a recent New Matilda article, ‘Don’t mention the war in Wentworth’, Dr. Peter Slezak observed that at a by-election meeting taking place in a disproportionately Jewish constituency, neither the political candidates nor questioners mentioned Israel or the matter of Jerusalem, and the words ‘settlement’ and ‘occupation’ were not uttered. Israel’s enactment of the Nation State Law was not mentioned, nor was the persistent ethnic cleansing of East Jerusalem. 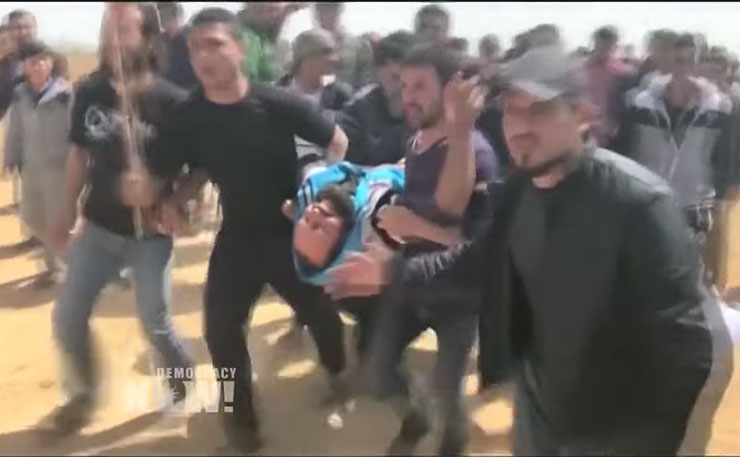 A Gazan is carried away after being sniped by Israeli soldiers on March 30.

It’s as though, to even sniff at Israeli/Palestine questions is to risk breathing the equivalent of an Ebola virus which would stigmatize those infected and become politically fatal.

A touch of empathy would be one way to respond to the cruelty which too many leaders seem willing to collude with by staying silent. Palestinians want to shake peoples’ consciousness and confront them with their decades-old complicity in the brutality of the occupation and the cruelty of the Gaza siege.

A Palestinian student has recorded events that should prompt remorse if not empathy. She refers to “The unfulfilled desires of our grandparents who died clinging to the right to return. The lives of many patients who died of minor illnesses due to shut barriers and checkpoints. The cries of Palestinian mothers. The stolen years of political prisoners. The amputated limbs. The uprooted olive trees. The demolished homes and hospitals, the deserted lands.”

Despair fills the minds of Palestinians who witness the killings and maiming at the Gaza border. Despair motivates anti-Zionist Israelis who protest weekly in cities like Haifa against the Gaza siege and their government’s brutality.

World-wide, I detect another despair: that the Israeli Foreign Minister Avigdor Lieberman can say there are no innocent people in Gaza and get away with it; and in so-called human rights respecting democracies, courage to take an anti-Sharpeville-like stand still can’t be found. Is it ignorance, indifference, political timetables filled with other priorities, or, as with the candidates in that Wentworth by-election meeting, is it considered too risky to raise questions which might appear to be even slightly critical of Israel?

Unless those questions are asked without fear, cruelties will continue despite international laws, despite politicians wanting to appear compassionate and strong even by refuting the principles which they say they hold dear. Who cares?