The future of ethical fashion is here: It’s now possible to grow leather without raising and killing animals. 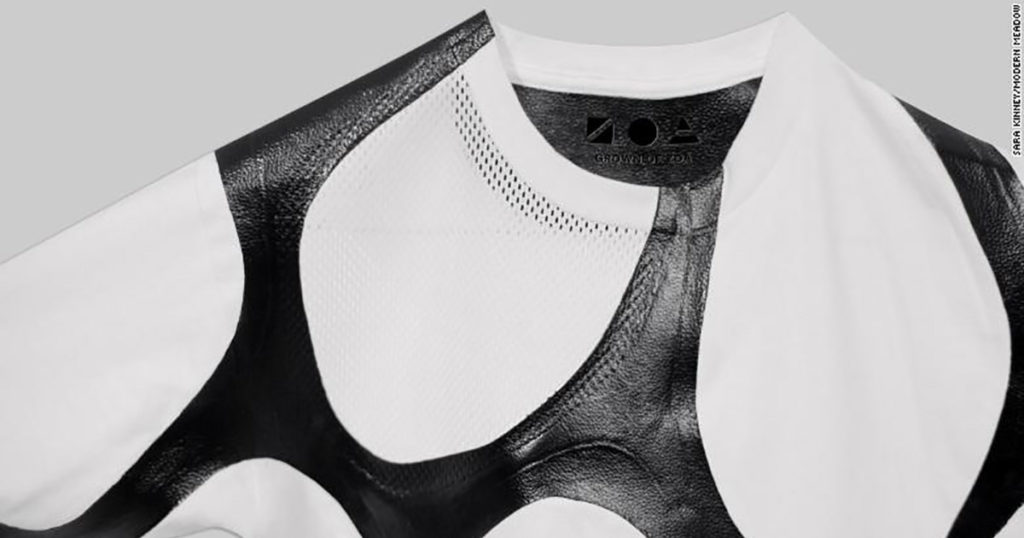 A Zoa T-shirt made by Modern Meadow the piece was commissioned by the Museum of Modern Art in New York City. Modern Meadow

13 Nov 2018 – A warehouse filled with huge gleaming silver vats hums around the clock, as billions of yeast cells work to make a material we can wear, sit on and carry around. In an adjoining room, rows of benches hold molds of different shapes and sizes, where sheets of cellulose layer up and become recognizable. In the next room, the material is finished and packaged, destined for designers, tailors and upholsterers.

This is the scene of a biofabrication plant, producing leather without the animals. A futuristic ideal? Companies like Modern Meadow don’t think so. As the firm’s CEO Andras Forgacs, a biofabrication pioneer, said during his 2013 TED talk: “Perhaps biofabrication is a natural evolution of manufacturing for mankind. It’s environmentally responsible, efficient and humane. It allows us to be creative: We can design new materials, new products and new facilities.”

The company is gearing up to launch its first products in a year or so, after successfully debuting a cultured leather T-shirt last year. Modern Meadow’s staff of 80 is working away at a production plant in Nutley, New Jersey, getting ready to revolutionize fashion and the materials industry—and change the way we think about animal products.

According to a 2017 report, veganism is on the rise—only 1 percent of Americans identified as vegans in 2014; that figure is now 6 percent. U.S. proportions are comparatively low; in India, as many as 42 percent of people are vegan. Moreover, New York-based consultancy group Baum + Whiteman predict that this year’s trend will be plant-based diets going mainstream. You might expect this to mean a drop in the world’s cattle population, but you’d be wrong—it has been increasing steadily since 2015 and now stands at more than 1 billion cows.

A number of factors could be contributing to this discrepancy, the leather industry being one: valued at $93.2 billion in 2016, the industry is expected to grow to $121.16 billion by 2022. Reasoning that leather is a by-product of the meat industry (which it isn’t), people are often quicker to pull on a pair of leather boots than tuck into a burger. Yet a glance at the process behind leather manufacturing suggests that walking in those boots may be doing more harm than eating a meat-based diet.

Livestock, many of which are reared for their hide, produce an estimated 14.5 percent of global anthropogenic greenhouse gas emissions. The products aren’t even used fully—as many as one-third of the hides produced are thought to end up in a landfill.

In addition to the environmental impact through greenhouse gas emissions and waste, it’s the process of tanning that is perhaps most shocking. Considered one of the world’s biggest pollution threats, the tanning of 23 billion square feet of leather a year directly affects an estimated 1.8 million people through chromium pollution.

Tanning preserves the leather and makes it durable, protecting it against the heat, cold and wet. It’s essentially an accelerated mummification process, beginning with the removal of hair, fat and meat by physical scraping and using bleach and lime pastes. Then the leather is treated using a mixture of chromium salts and tanning liquor. It’s the cocktail of chemicals used that has a toxic effect: in total, about 250 chemicals are needed to soak, treat and dye the leather.

The problem is that leather is usually processed in places with little environmental protection regulation, such as China, India and Bangladesh, so the chemicals are dumped into the environment; on average, tanning one ton of hide produces 20 to 80 cubic meters of toxic wastewater.

It’s not just the environment that’s in danger: People working in the tanneries are exposed to dangerous concentrations of the tanning chemicals, and they’re at risk of falls, drowning and injury by the heavy machinery. The chromium is the most dangerous chemical they handle, causing a whole host of problems, from skin ulcerations called “chrome holes” to respiratory disease and cancer. 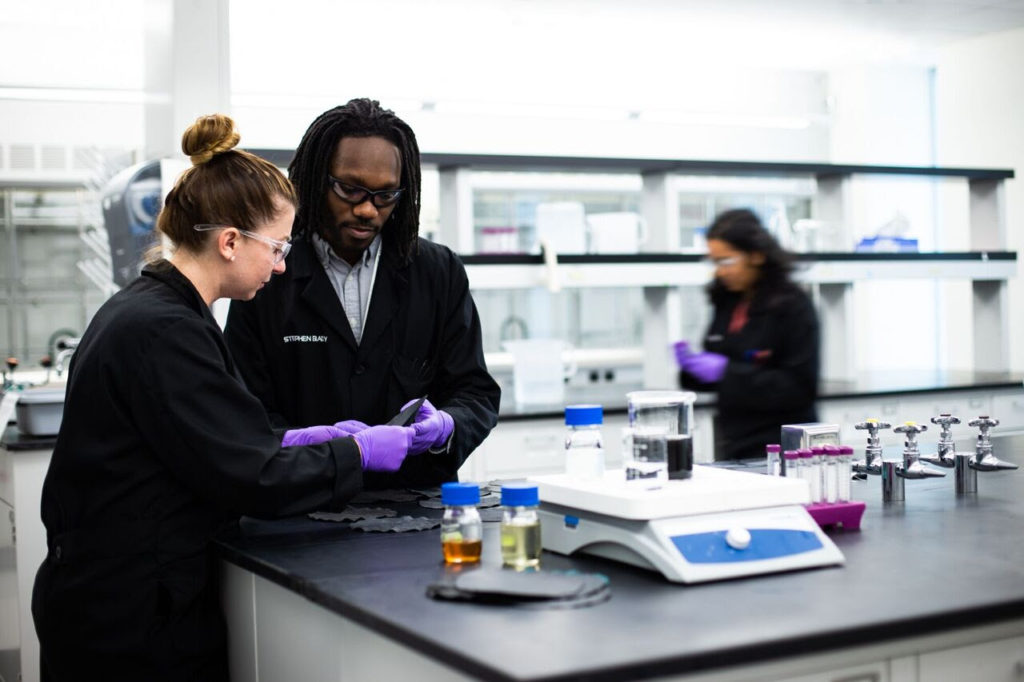 “Animals are not just raw materials, they’re living beings,” he said in his TED talk. “Already our livestock is one of the largest users of land, fresh water and one of the biggest producers of greenhouse gases, which drive climate change. … We need to move past just killing animals as a resource to something more civilized and evolved. Perhaps we are ready for something literally and figuratively more cultured.”

“We should begin by reimagining leather.” That’s how Forgacs proposes to shake up the industry—by culturing leather without the need for animals at all. Leather is essentially a simple material—one Forgacs and his team at Modern Meadow have spent the last few years working out how to grow through a process called biofabrication.

It’s not a new process; a decade ago, Forgacs co-founded Organovo, a company that pioneered a technique for printing human tissue for medical use. With biofabrication, it’s possible to grow all sorts of tissues and organs, like windpipes, skin and blood vessels, to implant into patients. Their work garnered a lot of attention, and Forgacs was soon approached about the possibility of creating animal tissue, particularly leather. He accepted the challenge and co-founded Modern Meadow.

Technically speaking, growing leather is simpler than growing human tissue, as there’s only one cell type to deal with. The secret is yeast: They alter the yeast DNA so the cells produce the protein collagen, the main constituent of leather. They ferment the yeast, much like in beer brewing, to grow billions of cells that produce collagen. Then they purify the collagen, which assembles into helices and fibers, forming the material’s structures.

The resulting leather is then tanned using a process with a smaller environmental footprint: “We preserve the material and then treat it to achieve the required suppleness and finish. Less water, less energy, less chemicals.” Modern Meadow’s proprietary process reduces the time it usually takes to make leather—two years—to just two weeks.

Are We Ready for the Alternative?

Forgacs is excited, and rightly so: The process doesn’t harm animals, it uses fewer chemicals and there’s less waste. The leather can even be grown in the shape of a handbag or a shoe, helping manufacturers down the line to reduce their waste. They can also play with the properties of the material, making it thin and transparent or thicker and opaque, soft, breathable and patterned—or a combination of these in a single piece of leather.

“This type of leather can do what today’s leather does, but with imagination, probably much more,” said Forgacs. Indeed, as the company responded to me in an email, “Biofabrication is still in its early stages, but the potential of the technology is massive.”

Modern Meadow’s materials brand, Zoa, will soon hit the consumer market; its “reimagined” graphic T-shirt was a hit in a fashion exhibit at the Museum of Modern Art in New York. Dave Williamson, the company’s chief technology officer, told The Atlantic that the T-shirt “will change the way you think about leather.”

“Leather is a gateway material,” said Forgacs—a way to jump-start the biofabrication industry. There are already other applications on the horizon. Bolt Threads is commercially producing engineered spider silk threads, with knit ties available to purchase. The company has also taken an alternative approach to leather: Its material Mylo is made by fungal mycelium cells that self-assemble into a leather-like material.

Think of all the other animal products we could eliminate using biofabrication. Ceratotech is “producing rhino horns without rhinos,” for example. “If poachers and consumers are just after the horn, and we’ve been able to create human tissue using genetic and stem-cell engineering, why shouldn’t we give this a try using rhinoceros stem cells?” said founder Garrett Vygantas.

Then, of course, there’s the holy grail: meat. As a group of researchers from the National University of Singapore and Indian Institute of Technology in Hyderabad recently argued in a paper in Biomanufacturing Reviews, “Cultured meat or in vitro meat offers a safe and disease-free way forward to meet increasing meat requirement without involving animal sacrifices and at the same time, reducing greenhouse emissions, as compared to conventional meat.”

But as genetic engineering and biofabrication techniques continue to get cheaper and more accessible, it will be the hesitancy of the market holding back the commercial viability of lab-cultured meat: People might be willing to wear something grown in a lab, but eating it is another story. Modern Meadow plans to release its first commercially-available product in 2020, and there’s a lot riding on its success: Zoa will make or break the company, and it also stands to have a big impact on the way the market perceives biofabrication in general.

As Forgacs predicted, the success of cultured leather could open the door to a whole new world of lab-made products, ultimately reducing our reliance on livestock, the suffering of animals and the impact on the planet.

Lucy Goodchild van Hilten is a writing fellow for Earth | Food | Life, a project of the Independent Media Institute. She is a writer with an MSc degree in the History of Science, Medicine and Technology from Imperial College London. She has served as assistant editor of Microbiology Today and senior marketing communications manager for Life Sciences at Elsevier.