Enough Is Enough – End the War in Yemen 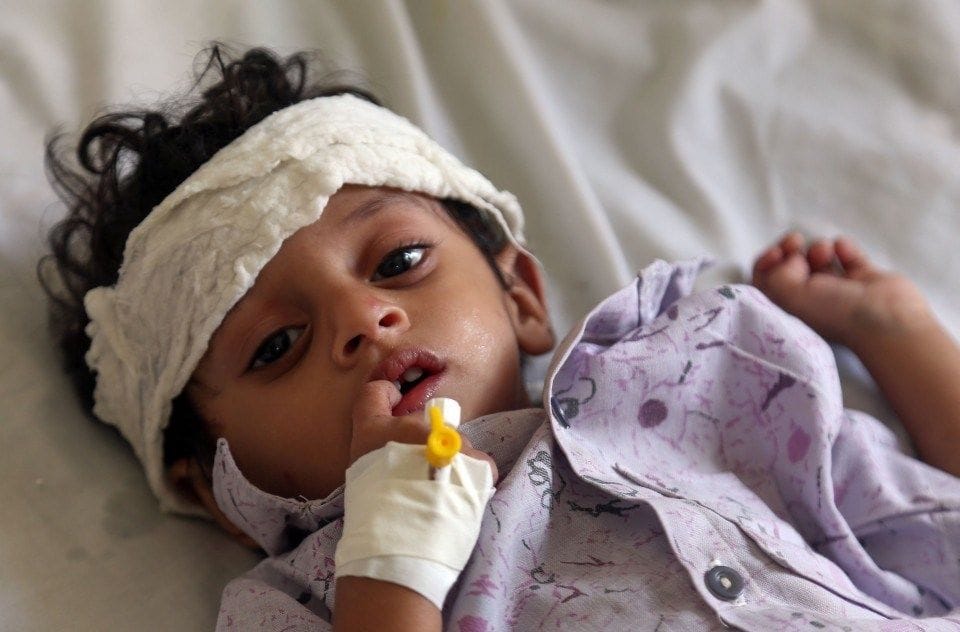 A Yemeni child after receiving treatment for malnutrition in a hospital in Taiz on Wednesday 21 Nov 2018. (Ahmad Al-Basha/AFP/Getty Images)

21 Nov 2018 – Today, the Yemeni people are suffering from the actions of outsiders. Regional powers have turned the country into an arena for proxy conflicts that have little to do with the actual interests of the Yemeni nation. Large parts of the country have been devastated, including much of its vital infrastructure. Millions are threatened by starvation and disease. The fighting has left tens of thousands of others dead or wounded.

This appalling tragedy should have never been allowed to happen. In March 2015, Saudi Arabia, the United Arab Emirates, and their regional and international allies (including the United States and the U.K.) decided to intervene militarily in Yemen. They were responding to the 2014 coup d’etat staged by the Iranian-backed Houthi militias, who overthrew the internationally approved and democratically legitimized transitional government.

The United Nations Security Council has unanimously condemned the Houthi power grab, as shown by the two resolutions (2201 and 2216) it subsequently passed. Resolution 2216 authorized the Arab Coalition to inspect vessels inbound to Yemen and to seize any arms shipments discovered.

Since then, the members of the coalition have expanded their military involvement far beyond this original mandate. Exploiting their control of the air, they have conducted airstrikes that wreaked widespread damage and killed countless civilians. Instead of reestablishing a unified Yemeni army under national command, they have formed militias loyal to their own governments in the territories liberated from the Houthis, completely bypassing the legitimate government on whose behalf they claim to be waging the war. Though about 80 percent of Yemeni territory is now free from Houthi control, President Abed Rabbo Mansour Hadi is still outside the country. He has spent most of the past four years in Riyadh, where he is being held under conditions approximating house arrest. He has not been allowed to return to the territories restored by the coalition, let alone Sanaa.

Since this futile and disastrous war began in 2014, neither the Security Council nor the western backers of the coalition have troubled to question the logic of the conflict. Why have the Saudis and their allies refused to allow the legitimate government to return to the liberated territories? Why all these massacres against civilians — in markets, refugee camps and hospitals, at wedding and funeral ceremonies, in schools and civilian neighborhoods? Why has the country been under air, land and naval blockade all this time? Why have Saudi Arabia and the United Arab Emirates, two of the wealthiest countries in the world, allowed this humanitarian crisis to continue?

Saudi Arabia has blocked Yemenis from leaving or entering Yemen. Instead of receiving Yemenis and treating them well, it has deported tens of thousands of workers and businesspeople who sustained millions of others.

It is hard to escape drawing a comparison between the Saudis’ brutal prosecution of the war in Yemen and their horrific murder of the journalist Jamal Khashoggi. The Saudi regime commits its crimes with extraordinary brazenness and then does everything it can to dodge responsibility. When held to account, Saudi leaders shift the blame to scapegoats and away from those who are truly responsible.

For all its horror, Khashoggi’s killing has at least encouraged a new global awareness about the nature of the Saudi regime — and renewed attention to the forgotten war in my country. Now there is a genuine cause for hope that this awakening, though far too late, will create fresh momentum for an end to the war and bring Yemenis back to the political process. Just this week, there have been signs that the warring parties are willing to consider a new round of talks.

The path to ending the war is clear. First, the United States and other countries must cease arms exports to Saudi Arabia and the UAE. The Security Council should pass a resolution demanding an immediate end to the war and compelling the Saudis and Emiratis to withdraw from Yemen. The United Nations must sponsor a political process that begins by obligating all parties to the conflict to disarm their militias.

This will allow Yemen to resume the political process that was disrupted by the coup. The United Nations should oversee the formation of government of national unity that will organize a referendum on the draft constitution and prepare for fresh elections. It is crucial to establish a national reconciliation commission responsible for providing redress to victims of the war. Saudi Arabia and the United Arab Emirates must be held accountable and compensate Yemen for the damages they have caused.

The Saudis, the Emiratis and their allies are not the only ones responsible for the tragedy in Yemen. The Houthis, too, must be compelled to cease their destructive behavior. They must be prevented from receiving any weapons and other support from Iran. They are an extremist group that is deeply hostile to civic values, and they have committed countless human rights violations and crimes. They believe in a theocratic ideology that grants them a divine and exclusive right to rule.

Saudi Arabia, the UAE and the Houthis must be told with one voice: Enough is enough.

Tawakkol Abdel-Salam Karman is a Yemeni journalist, politician, and human rights activist. She leads the group “Women Journalists Without Chains,” which she co-founded in 2005. She became the international public face of the 2011 Yemeni uprising and was awarded the 2011 Nobel Peace Prize.