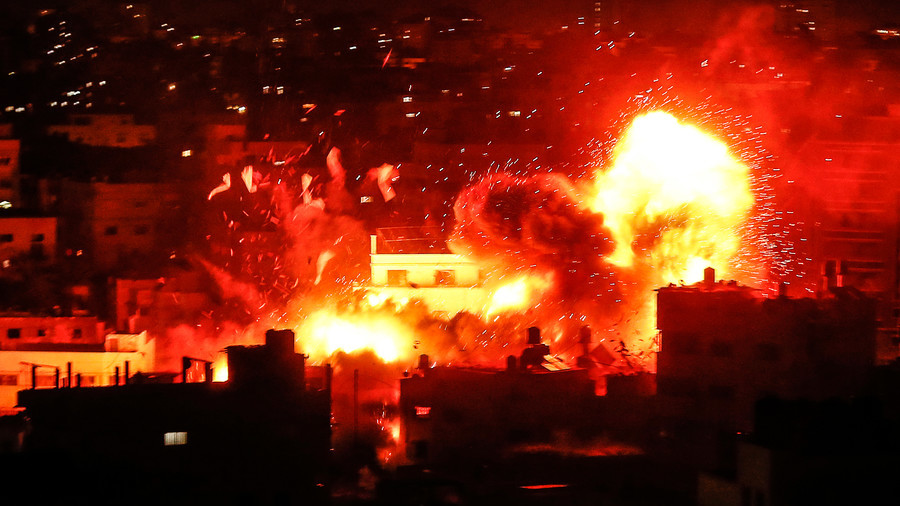 A ball of fire above the building housing the Hamas-run television station al-Aqsa TV in the Gaza Strip during an Israeli air strike, November 12, 2018. © AFP / Mahmud Hams

13 Nov 2018 – The world is fixated by the forest fires in Hollywood burning down stars’ mansions. With supreme irony some of them belong to those who helped raise millions of dollars for the Israeli Army which is now burning the hovels of Gaza.

The Hollywood warriors have insurance of course, and other homes too, sometimes many of them. The hovel-dwellers of Gaza have neither.

The brave firefighters of California are well-equipped and have the wind of hope of millions of well-wishers at their backs. There are no firefighters in Gaza.

The hovels of Gaza are unfortunately well-known to me, since long before Hamas even existed. In fact I saw Hamas be born, and Israel was the midwife. I was a comrade of Yasser Arafat then the Chairman of the secular PLO, an Arab nationalist, whose executive committee consisted of Arab nationalists and Moscow-aligned leftists like the PFLP led by the late Dr George Habash.

Israel feared this then zeitgeist in the Arab world so they turned, as the British had earlier in seeking to undermine Egypt’s President Nasser, to the Islamists. The Muslim Brotherhood, a client of the British in Egypt had brothers in Gaza of course. Those brothers became Hamas with the full cooperation of Israel.

I saw with my own eyes the open development of Islamism in Gaza, a catspaw against Arafat and the PLO. While the gaols (and the graveyards) were full of PLO men, the roads were choc-a-block with Islamist society vehicles. Communities were served by Islamic schools, hospitals & civic-society institutions of all kinds. Permitted, encouraged, sometimes financed by Israel. It was divide and rule in perfect harmony.

Of course, that was nearly 40 years ago and none of the leaders of Hamas then are still alive – by one means or another. The Hamas Israel thought it was developing as a client long-ago outgrew that role and is now a formidable fighting force which can be slaughtered from the air of course (along with anyone nearby) but on the ground, face to face, not so much.

Whilst a ceasefire was in place and peace talks were taking place in Cairo between Israel and Hamas, Netanyahu sent a special forces commando undercover into Gaza to assassinate a Hamas military commander and in the accompanying firefight an Israeli commander was slain. And all hell broke loose. As I write the dogs of war are unleashed and havoc has ensued.

Increasingly accurate Hamas missiles have been fired with greater accuracy and quantity. Israeli warplanes are bombing and rocketing like there was no tomorrow (with an unlimited guarantee of more from Donald Trump). This week the Palestinian television station Al Aqsa was eviscerated in an air-strike about which the Israeli government boasted on Twitter. Like Yugoslav TV in Belgrade, like the Al Jazeera TV station in Baghdad, the slaughter of tea-ladies, make up departments, camera-operators and of course journalists has elicited only stony-silence from Western media outlets.

The media solidarity, triggered by Donald Trump withdrawing the White House credentials of CNN journalist Jim Acosta, who none of us had ever heard of, working for a station that none of us ever watches, was impressive. The withdrawal of the life’s blood of TV make-up ladies hasn’t even made the news, especially on CNN.

For them as with the other Western fake-news machines, the clock starts ticking when Israel says it does and when Israel “responds“. That the response is a response to a provocation matters not a jot or tittle.

In any case, nobody working in the Western media today either knows or cares that the root cause of this is the existence of the barbed wire enclave called Gaza.

Two million Palestinians locked in a tiny strip of land (it’s called the Gaza Strip for a reason) with no entry or exit guaranteed and overwhelmingly refused. Eighty percent of those two million are refugees there, looking through the barbed wire at their own property now occupied by others. When they approach the fence they are mercilessly cut down by snipers.

Since March, tens of thousands of Palestinians have been wounded at the Gaza fence. Hundreds have been killed including children, women, nurses and of course the press. Hundreds of limbs have been amputated, many have been blinded, left eyeless in Gaza. They were unarmed, in their “own territory” and had not remotely reached the fence which, entirely unilaterally, the Israelis have demarcated as their border.

Throughout the last ten years or more the Palestinians in Gaza have endured bitter cold in winter & baking heat in summer, with deliberately-rationed electricity supplies controlled by Israel. Often there is none, at best four hours per day. Medical supplies and foodstuffs frequently perish as refrigeration fails.

Israel controls the water supply too and most of Gaza never has access to clean potable water.

Even the sea off Gaza is remorselessly controlled with abundant fish-stocks only harvestable by fisherman at the risk of their lives which are frequently lost.

It is a ghetto of suppurating suffering. It is a crucifixion of an entire population. But it is not the whole story.

The whole story goes back much farther and is beyond the scope of this article. Palestine no longer exists, it is wiped off the map. Its people are scattered to the four corners of the earth as exiles and refugees, or live in the Bantustans of the West Bank, the illegally annexed Holy City of Jerusalem, or in besieged Gaza. Until this is resolved and as long as a single Palestinian remains alive there will be resistance, there will be trouble. It is this story that all the world’s governments and all their institutions have singularly failed to meaningfully address.

And so for now, and for the future, there will be much wailing, rending of garments, and gnashing of teeth in the Terra Santa.