Rohingya: Not Willing to Go Home 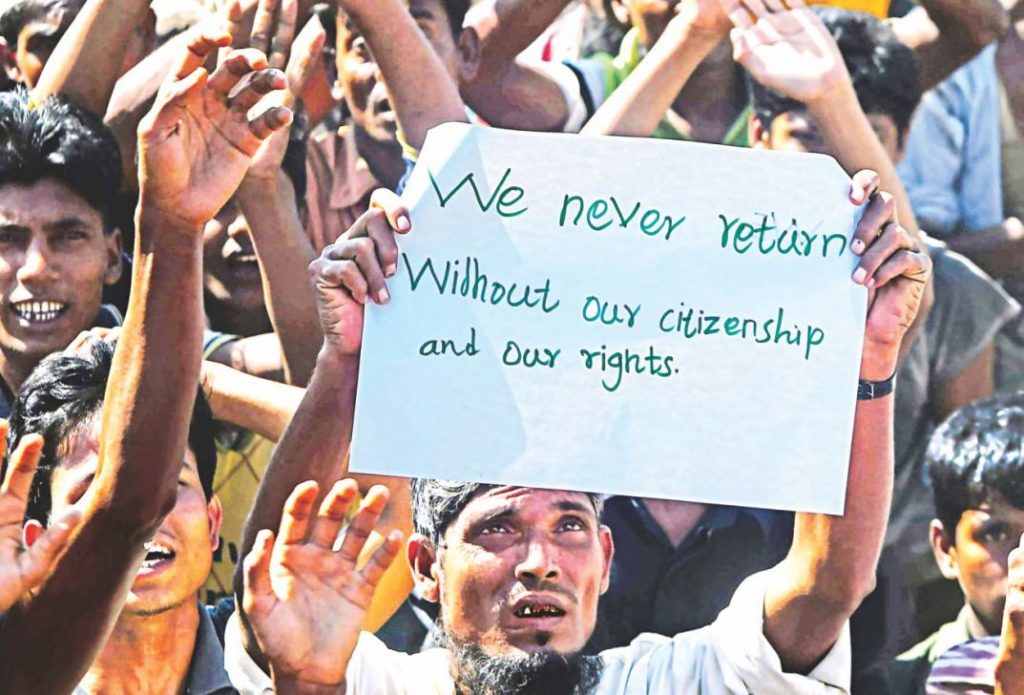 A Rohingya man carries a placard during a protest at the Unchiprang refugee camp in Teknaf on 15 Nov 2018. Photo: AFP

16 Nov 2018 – The much-awaited launch of the Rohingya repatriation was cancelled at the last moment yesterday as the refugees refused to return to Rakhine for fear of fresh persecution.

He said Bangladesh sheltered the persecuted Rohingyas with an open heart when they fled Rakhine last year.

“We can’t force them to go,” he said, adding that Bangladesh would now discuss with Myanmar sending a group of Rohingya leaders (majhis) to Rakhine to see for themselves the arrangements made there.

“It’s a proposal from Japan…. Officials from UN bodies and representatives of Bangladesh to the joint working group can also go with them,” Mahmood said.

In the first batch, a total of 150 Rohingyas from 30 families living in Teknaf’s Unchiprang camp were supposed to be repatriated to Myanmar through Ghumdhum border in Bandarban.

He said India has built 250 houses and another 500 will be set up near Maungdaw township. Besides, China is building 1,000 houses.

“It’s not enough only to build houses. Primary schools for children and health centres, clinics are also needed. The work is going on.” 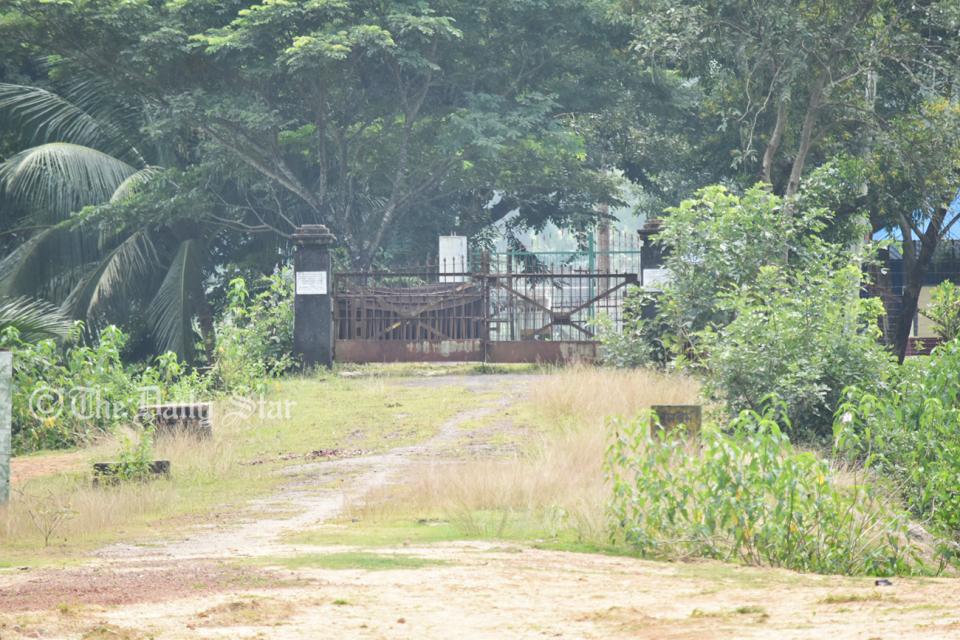 The gate before “Friendship Bridge” at Ghumdhum point in Bandarban, where the repatriation of a group of Rohingya refugees will take place by land border with Myanmar today, Thursday, November 15, 2018. Photo: Mokammel Shuvo

The foreign minister said Bangladesh told India and China to build the houses at places from where the Rohingyas fled. “In that case, the refugees would be willing to go there.”

Mahmood said no attempt was made to force the refugees to return home. Bangladesh always wanted a sustainable and peaceful solution to the problem through dialogues, he told reporters.

Earlier in the afternoon, Refugee Repatriation and Relief Commissioner Abul Kalam said they were fully prepared to start the repatriation but postponed it due to unwillingness of Rohingyas.

The announcement came following his two-hour visit to the Unchiprang camp in Teknaf, where hundreds of Rohingyas staged demonstrations against the repatriation.

Four buses went to the camp, which houses around 22,000 refugees, in the morning to take the families to the border area for repatriation.

“Our majhi [community leader] called us in the morning and asked to gather together at the CIC [camp in-charge] office for repatriation,” said Abdul Shukur, a Rohingya enlisted at the camp.

Some other families also went to the CIC office, expressed their unwillingness to return home and placed some demands for their safe return to Rakhine. 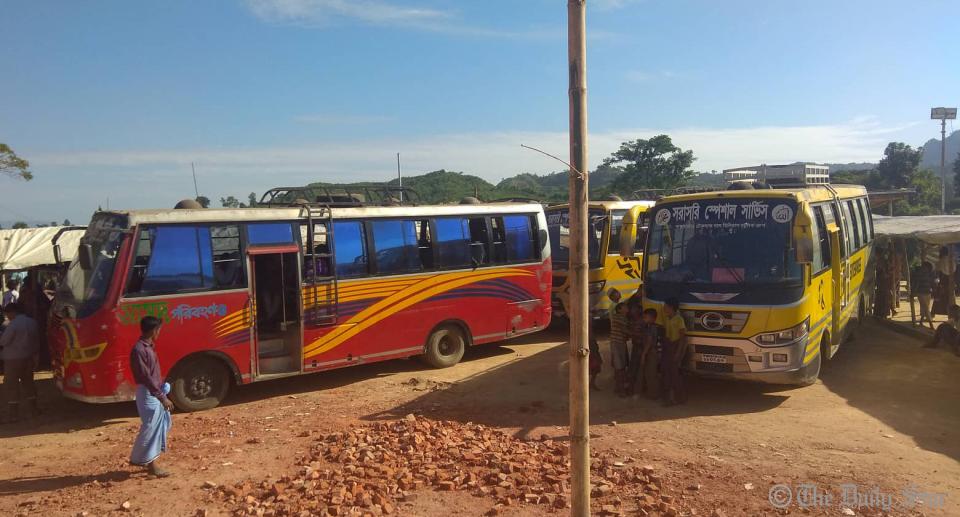 Few of the buses kept ready for transferring Rohingyas to the repatriation points on Thursday, November 15, 2018. Photo: Mokammel Shuvo

“We demanded safe return to our homesteads, not to any camp. We demanded justice for the persecution,” Shukur said.

Amanullah, a majhi at Unchiprang camp, said, “We can’t return to a unsafe place. They could kill us. We can’t let our people to be persecuted again.”

Rohingya community leaders said some families of the camp fled their shanties on Wednesday night to avert repatriation.

Some 750,000 Rohingyas entered Bangladesh since August 25 last year escaping a brutal military crackdown on them in Rakhine. They joined some 300,000 others who had fled earlier waves of violence in the Southeast Asian country where they have been denied citizenship since 1982.

A UN report has detailed mass killings and gang rapes with genocidal intent in the crackdown and urged prosecution of Myanmar’s commander-in-chief and five generals under international law. Myanmar denied the allegations, saying the campaign was a response to the attacks by Arakan Rohingya Salvation Army.

In an unprecedented move in September this year, International Criminal Court ruled it could prosecute Myanmar for alleged crimes against humanity against the Rohingya.

Amid global criticism, Myanmar signed a repatriation deal with Bangladesh in November last year. The repatriation was supposed to start on January 23, but was delayed apparently for procedural issues.

Dhaka earlier had sent a list of more than 8,000 Rohingyas to Naypyidaw. Some 5,000 of those names were verified by Myanmar.

Under global pressure, Myanmar signed a tripartite deal with UN Refugee Agency (UNHCR) and the UNDP that would assess the situation in Rakhine in June, two months after the UNHCR signed a deal with Bangladesh to facilitate the repatriation.

In a meeting of joint working group, comprised of officials from Naypyidaw and Dhaka, late last month, the decision was taken to begin the repatriation from November 15. Two camps — one at Ghundhum and the other in Teknaf — were set up for the refugees to stay before they are repatriated. In the first phase, 2,260 Rohingyas were listed for return.

The UNHCR, which was mandated to determine the voluntariness of the refugees for return, interviewed the Rohingyas in the camps since Tuesday.

The refugee agency urged Bangladesh to halt the repatriation now, saying the conditions in Myanmar were not conducive.

Prof CR Abrar, who teachers international relations at Dhaka University, said it was not surprising at all that the Rohingyas would reject the repatriation now.

“How can the Rohingya go back to Rakhine where people still face rights abuses and confinement?”

There was remorse for the brutal act and none was held accountable by the Myanmar authorities yet, he told The Daily Star.

“There is a threat for Rohingyas of being interned in the camps for the rest of their life,” Abrar said.

“The Bangladesh government will be stunned to see how quickly international opinion turns against it if it starts sending unwilling Rohingya refugees back into harm’s way in Myanmar,” Bill Frelick, the group’s refugee rights director, said in a statement.

It said Myanmar has done nothing to create conditions for safe and dignified returns or to address root causes of the crisis, including statelessness, impunity for grave violations by the military and recognising Rohingya ethnicity.

The refugees in Cox’s Bazar say more than 124,000 Rohingya have been confined to camps in Rakhine since displacement in violence in 2012.

The reception centres and transit camps Myanmar built this year to process and house returnees are surrounded by barbed-wire perimeter fences and security outposts, similar to the camps where the internally displaced Rohingya are now confined, the HRW said.

Expressing deep concern over the proposed repatriation, the Canadian government yesterday in a statement said the return of Rohingyas must not be rushed.

“The crisis continues. Violence and impunity persist in Rakhine state, and refugees continue to flee the country. The Rohingya must not be repatriated to an environment where violence and gross human rights abuses continue to be perpetrated,” reads the statement.