29 Nov 2018 – As I stared at the picture of seven-year-old Amal Hussain dying of hunger I couldn’t contain my anguish, tears flooding my eyes. Some hours earlier I was wining and dining with friends whom I told about my revulsion at the world’s indifference at the Yemen tragedy, at the hypocrites of the West who shamelessly crawl at the feet of the butcher of Saudi Arabia Mohammed Bin Salman. 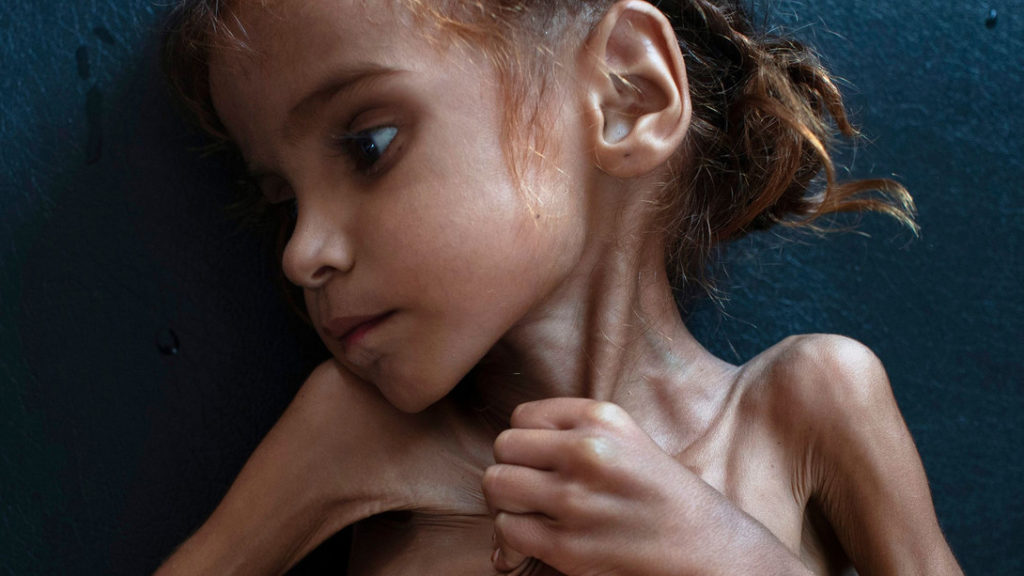 President Donald Trump imposes draconian sanctions on Cuba and Iran but fetes the thugs of Arabia, gloats about the $100 billion in weapons exports to one of the most undemocratic regimes in the world.

The West imposes sanctions on Myanmar and Western Universities withdraw accolades bestowed on Daw Aung San Suu Kyi in her heyday. But many, possibly all, have for decades happily and amorally received large handouts from Saudi Arabia and the UAE. Not surprisingly, they are all silent on Yemen.

Never since the end of WWII when great Statesmen/women drafted the UN Charter and the UN Declaration of Human Rights which incorporates the Statutes of the International Court of Justice, have we seen the dangerous unraveling of the complex architecture of international law and institutions.

Notwithstanding the limitations and flaws stemming from the need to compromise when nations negotiate international treaties, adherence by all to a rules-based world has benefited small and large powers; the complex interconnected web of international law has enabled an intense flow of trade and finance across oceans, exchanges in education, science, medicine, innovation, arts, culture and sports, and restrained our worst impulses to go to war.

In some instances, thanks to a rules-based world, small countries have prevailed over much larger ones when the latter, shamed by an informed civil society, decided to resolve seemingly intractable disputes via bi-lateral talks or via the good offices of the UN Secretary-General. Recent examples: Timor-Leste and Indonesia (1999), Timor-Leste and Australia (2018) Nauru and Australia (1992), the Philippines and China on the South China Sea, (2016) etc.

A State-based multilateral institution, the UN is inherently flawed; it is failing miserably in Syria, Yemen and South Sudan, because regional and extra-regional powers lack leaders of solid convictions and wisdom able to agree on preventing war and genocide.

But as much as it is failing the peoples of these unhappy, war-torn countries nevertheless hundreds of thousands of lives have been saved by the UN and its many agencies in Syria, Congo, South Sudan, and CAR.

The Organization of American States is confronted with and seems unable to contain the deterioration of the situations in Venezuela and Nicaragua, extreme poverty and violence in Honduras and El Salvador, drug-related violence in Mexico and the dangerous unraveling of the fragile historic peace agreement reached between the Colombian FARC insurgency and President Santos in 2015.

The incompetence and arrogance of President Maduro has bankrupted an extraordinarily rich country and created the gravest humanitarian crisis ever faced by Venezuelans and the region.

Brazil is in a dangerous drift to the extreme right, a violent tailspin with more than 60,000 yearly violent deaths, high unemployment, extreme poverty and extreme corruption among the political and social elites resulting in a majority of Brazilians electing an extreme-right Army captain, a passionate admirer of President Trump, who promises war on the media, blacks, indigenous peoples and gays. Time will be the best judge whether such a philosophy and approach will rescue Brazil from the abyss or will push it over the edge.

ASEAN, widely recognized as a very effective regional organization, is nevertheless not living up to expectations, unable to effectively mediate the decades-old conflicts in Southern Thailand, Myanmar and the Philippines. An organisation once proud of its “ASEAN Way” of forging consensus on almost any issue at hand, is split on the South China Sea and Myanmar.

Indonesia is a truly bright spot; with 270 million people it has the largest Muslim majority in the world and Indonesian voters have been wise in every election cycle in voting moderate political parties and leaders over those espousing an extreme brand of Islam and violence.

Washington based Freedom House designates Timor-Leste as the most democratic country in Southeast Asia. I would also rate Indonesia very high in democratic pluralism and inclusiveness.

A relatively peaceful transition from dictatorship in 1999 to democracy is owed much to the two moderate mass organizations with a combined membership of approximately 150 million followers, Nahdlatul Ulama and Muhammadiyah.

There have been violent terrorist incidents launched by home-grown extremist groups linked to Al-Qaeda and ISIS, but Indonesia remains mostly open, tolerant and respectful of ethnic and religious minorities.

Comparatively few Indonesian citizens, an estimated 400, went to join ISIS in Iraq and Syria; 700 reportedly went from Malaysia and many thousands more from majority Christian Belgium, France and the UK.

However, Indonesian leaders acknowledge that the battle between extremism and moderate Islam continues and there are concerns about rising extremism in the archipelago.

While much attention has been focused on the Korean Peninsula flashpoint, the increasing militarisation of the South China Sea by China and extra-regional powers like the US, UK and Australia exponentially increase the risks of accidental confrontation.

The US Secretary of State was recently quoted as having urged China to be a “normal country”.

In fact, China is seen by many as “very normal”; it is an economic and military superpower with a steady leadership, a clear vision and strategy for where it wishes to go; it seeks regional and global influence through trade, investments, commercial and soft loans, grants, etc,

Its considerable land, sea and air forces are confined to guarding its sovereign territory and asserting its presence in its immediate vicinity, the South China Sea and the Taiwan Straits; they are not entangled in Syria or Afghanistan; its Air Force is not bombing and killing people in far-off shores like Yemen and Syria. Chinese UN “peace-keepers”, medics and engineers are deployed on dangerous fronts like South Sudan.

To enhance its global visibility and influence, China choses to work through the UN, being the only Permanent Member of Security Council with significant peace-keepers and military assets. Via its very ambitious initiatives like the International Infrastructure Bank and the One Belt One Road, and the dizzying number of bi-lateral arrangements it has entered to in Asia, South Pacific, Africa and Latin America, China is outmanoeuvering the traditional Western development-aid providers.

With 1,2 billion people, political reforms in China have to be managed carefully to avoid the disastrous path of the Arab Spring or Soviet Union’s perestroika. Chinese leaders and most people are very familiar with and are weary of the outcome of recent democratic revolutions. If these situations were to unfold in China we can easily imagine the catastrophic consequences for China and beyond.

All things considered, the enormously successful Singapore model with a tightly controlled political space in the first decades of independence evolving gradually into a more open political regime seems be the most closely studied model by Chinese experts. China is NOT as open and free as Australia, New Zealand, Indonesia or Timor-Leste. But it has progressed and opened up significantly in many ways since my first visit there in January 1976.

The South China Sea claims, the relationship of China to Taiwan, and demands for greater political freedom in Hong Kong are some test cases for this emerging global power that demand maximum prudence and wisdom if China is to continue its global trajectory as a super power. I believe Chinese leaders should listen more to their domestic critics, accept them instead of jailing them. An enduring civilization of 5,000 years must surely have a vast treasure of accumulated experience to manage XXI Century social and political challenges.

Angela Merkel is sailing into her political Winter. The greatest leader and advocate of Europe’s unity and cohesion, her demise further weakens an institution that is confronted with unprecedented perils, both within and without, stretching from the UK to Italy, France, Poland, Hungary, Austria, an explosive mixture of extreme right and genuine fears but also of outright xenophobic sentiments at the waves of illegal migrants and refugees flocking to Europe.

Failure of Eurocrats and political elites in connecting with their own people, a bloated Brussels-based bureaucracy that has usurped much national sovereignty, mismanagement of the 2009 financial crisis and the rescue packages that benefited scandalously well-paid CEOs and punished the middle class, workers, pensioners and youth, have further deepened popular resentment.

But unraveling of the most successful post WWII social, economic, financial, political and security architecture would be madness. A disunited Europe of many Lilliputian States going back to surviving on tax free business, bank secrecy and money laundering is certainly not a promising and proud alternative.

The positive side of the Brexit movement is that it will force Brussels to be more sensitive and connect more with the people and return sovereignty to its members. But staying in the EU would be best for the UK and the whole of Europe.

To put all blame for the world’s current troubles on President Donald Trump is too simplistic and unfair, as these issues had been worsening long before the emergence of Donald Trump.

But Trump, uneducated yet very cunning, rose to power by skillfully reading the disenchantment and anger of legions of citizens in America impoverished by the 2008-9 financial meltdown.

Apart from tiny, proud Iceland, which jailed the CEOs responsible for the ruinous lending and investments made, no one in the US and Europe has paid for their crimes. However, Donald Trump, for ever the unprincipled and unscrupulous demagogue, has failed to drain the swamp of corruption as he promised. He has brought Wall Street to the White House.

Whether we like it or not, by default or by design, the US, by virtue of the size of its economy and its military might, matters to the world. Over generations we have been inspired by great American leaders, in particular the Kennedys, Martin Luther King and others in more recent times like Jimmy Carter and Barack Obama. President Trump has not lived up to the expectations of hundreds of millions around the world. He has turned the US into a laughing stock, while not providing the inspiring leadership the world needs.

Our world is adrift. But we can try to contain the harm if countries with responsible leaders, and there are still many, do their utmost to connect with their peoples and together preserve national social cohesion and peace; build the building blocks of peace in our respective countries, create islands of tolerance, mutual respect and inclusiveness around the world.

The storm will pass. Better times will come.