Chickens Freezing to Death and Boiled Alive: Failings in US Slaughterhouses Exposed 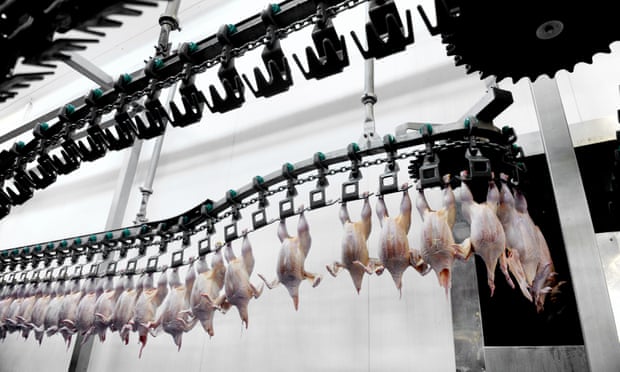 17 Dec 2018 – Chickens slowly freezing to death, being boiled alive, drowned or suffocating under piles of other birds are among hundreds of shocking welfare incidents recorded at US slaughterhouses, according to previously unpublished reports.

Among them are “inexcusable” violations, say campaigners, who ask if the US Department of Agriculture’s (USDA) current system, where inspectors issue reports when they see violations, really works. One inspector, who asked to remain anonymous, questioned the impact of those reports.

An investigation by the Guardian and the Bureau of Investigative Journalism looked at hundreds of inspection logs from the USDA detailing incidents in poultry plants across the country. In recent years, inspectors recorded numerous incidents where:

In one incident in January, more than 34,000 chickens froze to death while being kept overnight outside a slaughterhouse in a truck.

The Guardian’s findings have fuelled concerns that a post-Brexit trade deal with the US could see the UK flooded with chicken produced to lower welfare standards. This follows last year’s transatlantic row over chlorinated chicken, which prompted political interventions in both countries.

The records include hundreds of instances in which groups of chickens and turkeys were bludgeoned, suffocated, scalded, frozen or heated to death. Inspectors note repeatedly that the plants have not put in place adequate protection from the weather while the animals wait. However, they also note that after many reports the plants do carry out retraining for workers.

The violations were witnessed between 2014 and this year at some of the largest poultry processors in the country as part of the national inspection system. The records, kept by the USDA’s Food Safety and Inspection Service (FSIS), were originally obtained through Freedom of Information Act requests by the nonprofit Animal Welfare Institute (AWI).

The USDA dictates rules for humane slaughter, but these only apply to “livestock”, which the US government considers separate from “poultry”. There are “good commercial practice” guidelines, but they are largely voluntary and not enforced. The USDA is not obliged to take any action against plants that violate these practices, other than writing up a report.

“We’ve learned that the incidents resulting in the most suffering are those related to the neglect or abandonment of birds during transportation and during holding at the slaughter plant,” said Dena Jones, director of the Farm Animal Program at AWI. “None of these incidents is covered by current USDA regulations.”

Birds that have died by a means other than approved slaughter methods – freezing to death for example – are considered “adulterated” and cannot be sold as meat. If several chickens drown in the scalding tank rather than enter the tank unconscious beforehand – demonstrating that the plant has “lost control of its process” – that can be grounds for a citation, or noncompliance report, in one of the few punitive options open to inspectors. The plant must then take action and fix the problem, and if they fail to do so, the USDA could close the plant or prevent its product from being sold.

The actual number of birds affected by processing failures is impossible to say. Reports are usually made only after more than six animals are deemed to have been harmed at one time, and inspectors are not always present to witness a violation.

Animal welfare organisations have submitted legal petitions in recent decades charging that the USDA is not fulfilling its remit to protect animals from undue suffering and the public from unsafe meat. The USDA has consistently responded that it does not have the jurisdiction to create such regulation.

“FSIS is a regulatory agency that ensures that laws affecting livestock and poultry are implemented in federal establishments across the nation,” said an FSIS spokesperson. “It would indeed require an act of Congress for poultry to be added under the Humane Methods of Slaughter Act.”

Some of the plants appear several times over a number of years, according to AWI. Case Farms, a company with plants in North Carolina and Ohio, has two plants that have received a number of reports, and Pilgrim’s Pride, one of the four biggest chicken processors in the US, has also had a number of violations in the last decade, analysis has shown.

“We take each circumstance of animal welfare seriously, and we encourage our employees to report any incident via an anonymous, third-party hotline for reporting of welfare concerns,” a representative for Case Farms said in response. They now have a policy of zero-tolerance for cruel treatment of birds, which results in employment termination, and they have added cameras and other technologies to their plants to monitor standards more closely.

Pilgrim’s Pride, a subsidiary of Brazilian-owned JBS, the largest meat processor in the world, did not respond to our request for comment.

Asked if USDA guidelines are adequate, an FSIS spokesperson responded: “The violations you reference, when compared to more than 9 billion poultry carcasses we inspect annually, shows that our inspection system works.”

The Guardian spoke to a USDA inspector at a chicken plant in the southern US. Under condition of anonymity, she said she questions the efficacy of her reports.

“You have a document. That’s basically all it is,” she said. “It’s just a document stating what happened. And to me, that’s really nothing.” She also said that on several occasions she had brought welfare issues to the attention of her supervisor or plant employees but no action was taken. “They just act like sometimes they don’t care.”

Yvonne Vizzier Thaxton, director of the Center for Food Animal Wellbeing at the University of Arkansas, reviewed some of the USDA records and found “serious” and “egregious” violations. She said instances involving large numbers of birds and mechanical failures are “inexcusable”. She believes employee training could alleviate some of the issues, but keeping a highly competent workforce is a challenge in the poultry industry. “We have a turnover issue. You have to constantly be training.”

The EU has not permitted the import of US poultry in more than two decades but a post-Brexit trade deal could open the door for US chicken.

“Once the market is flooded with cheaper imports [produced] to a different or lower standard then simply through price it can drive a wedge through our standards and we either compete in a similar way or lose production,” said Richard Griffiths of the British Poultry Council.

Clare Oxborrow, of Friends of the Earth, said the UK urgently needs a law to prevent UK standards being lowered, “plus guarantees to domestic producers that the standards they work to won’t be undermined by low quality imports”.

A Defra spokesperson said: “We have been absolutely clear that we will not water down our high food safety and animal welfare standards in the pursuit of any future trade agreements.”

The US poultry industry slaughters about nine billion birds each year, a number the Trump administration is hoping to raise. In September, the administration released a plan to allow plants to bring their processing speed up from the previous cap of 140 birds per minute to 175.

The USDA inspector who spoke to the Guardian works at a plant that is allowed to operate under that faster line speed as part of a pilot programme for the new policy. She disagreed that faster is better. “Slow the line down,” she said. “The birds are going 175 a minute. That’s a lot to try to kill in a minute.”

In August, AWI and Farm Sanctuary filed a lawsuit against the USDA alleging that the agency has an obligation to make its violation records available to the public proactively, without a FOIA request. The organisation would also like to see the USDA implement stricter enforcement for welfare violations.