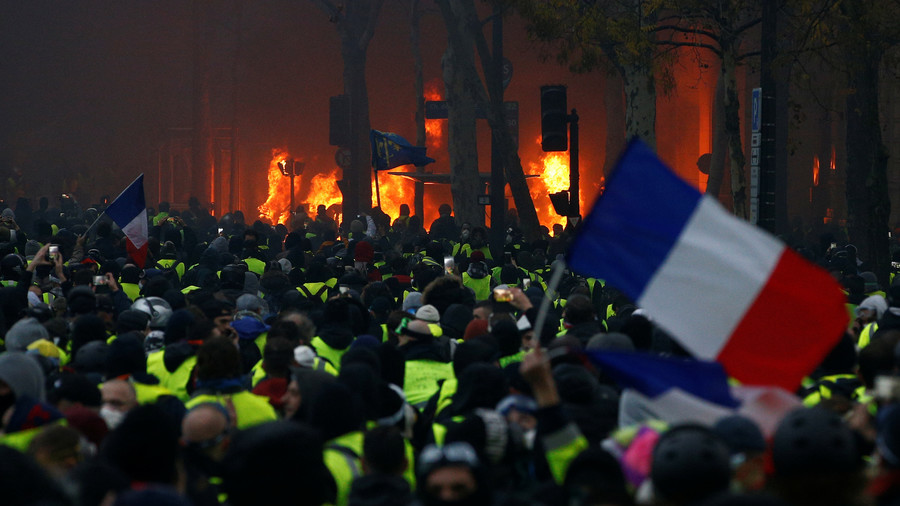 3 Dec 2018 – When violent protests shook Kiev in 2013, Western analysts and leaders quickly threw their support behind the anti-government ‘revolution’ — but after weeks of Yellow Vest protests in France, the reaction has been very different.

While Western governments and commentators denounced the Ukrainian government of Viktor Yanukovych and urged that he give in to protesters’ demands five years ago, this time around, they are denouncing the French protesters and urging President Emmanuel Macron, whose popularity stands at about 25 percent, to stand firm against dissatisfied citizens.

Western media coverage has also differed drastically with reports describing French protesters as rioters, while Ukrainian protesters were described as revolutionaries. The contrasting reaction has prompted many to ask the question: If a so-called revolution is allowed to happen (and even applauded) in Ukraine, why not in France?

The European Union very well represented in this hypocrite…😷 https://t.co/ad168H8Syv

#France protests spreadhttps://t.co/V1ixt1RpKW
Reminder: When similar scale protests in Libya Syria Iran & Ukraine (in contrast to when in US UK allies eg SaudiArabia & Bahrain), the West urged overthrow of their govts, and our media reported them not as riots but revolutions

French police have cracked down on the ‘Yellow Vest’ protesters in bloody clashes, during which water cannons and tear gas were deployed to disperse huge crowds, who responded by throwing stones at officers. The extent of the chaos has even caused officials to mull imposing a state of emergency and prompted concerns that protest movement could spread to countries like Germany and the Netherlands. Worried government officials and French and European political commentators have eagerly called for the “rule of law” to be respected and for violent protesters to respect French institutions.

In Kiev, however, when protesters set fire to cars, defaced public property and attacked police officers, they were held up as heroes. Law and order was of little concern to Western media which wholeheartedly supported the Maidan movement. Similarly, when anti-government protests kicked off in Syria in 2011, Western leaders and commentators advocated the swift overthrow of the government and provided moral (and material) support to anti-government rebels during the subsequent civil war that ripped the country apart.

During a visit to Argentina for the G20 Summit last weekend, Macron vowed that he would “not concede anything” to the “thugs” who want “destruction and disorder.” His unwillingness to cave in the face of a mass protest movement, however, has not prompted any calls for him to step down and respect the will of the people, as happened in Ukraine and Syria.

On Twitter, well-known French political commentator and media personality Bernard-Henri Lévy, lashed out at the Yellow Vest protesters, accusing them of “playing with fire” and saying that all that matters is respect for French institutions and the democratically -elected president.

Lévy’s followers, however, were quick to remind him that his reaction to protests in Ukraine were quite different. Lévy, who was in Ukraine during the Euromaidan movement, actively promoted it, giving speeches and tweeting enthusiastically about the protests. When Yanukovych was overthrown, he described it as a “a historic defeat of tyranny.”

As the protests raged on for the third week, other Twitter users mocked the patronizing Western reaction to anti-government movements in other regions, with one suggesting that perhaps hundreds of Arab experts could get together at fancy conferences to attempt to decipher the causes of this fascinating ‘European Winter’ movement.

Next year in the Arab world, we will hold a host of conferences on the ‘European Winter’ with hundreds of ‘experts’ to describe this phenomenon. #oxidentalism

Experts are already warning of a ‘domino effect’ leading the protests to spread from France to neighbouring countries. In all of this it’s not clear how we in the East should respond, aside from calling on the French authorities to respect the right to protest.

Another said it was about time that Iranian President Hassan Rouhani called on Macron to exercise “restraint” and ensure that the “freedom of expression and demonstration” are respected in France.

It’s time for president Rouhani to call on his French counterpart to exercise “restraint and appeasement”.
“fundamental liberties, especially freedom of expression and demonstration, must be respected”.#EuropeanWinterhttps://t.co/ooTnyJ1pBy

Sarcasm aside, it looks very much like violent revolutions and regime change are only a good enough solution to crises in countries far away from the centres of Western power and influence and led by uncooperative governments. When the rumblings of revolution are felt in Paris, where Macron remains committed to upholding a neoliberal and West-centric world order, it’s a different story entirely.