The Opposite of Evil Is No Longer Goodness

My point is simple. It’s now time to focus on courage. 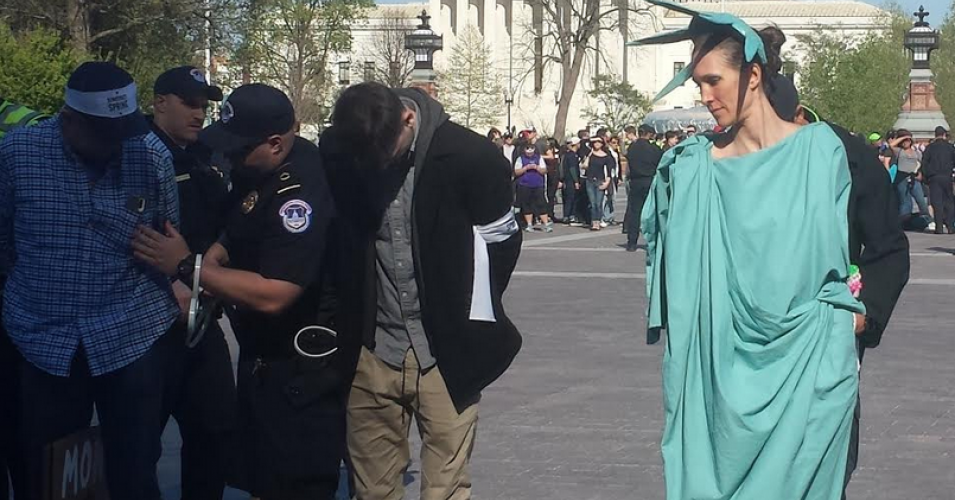 Lady Liberty getting arrested. “Being ‘good’—kind and honest with those we touch directly—is admirable and desirable, but we need more,” writes the author. “It’s time to elevate another virtue: courage.” (Democracy Spring – April 2016)

3 Dec 2018 – My headline is provocative, so let me quickly explain, starting with a huge claim about what’s unique about our world in this moment. Then I ask, What, right now, is most required of our species?

Our era has been dubbed the Anthropocene because for the first time we humans are making our mark on the entire planet.  Isn’t it high time we nail down the most basic traits of this master species—traits that will determine how it might handle responsibility of such magnitude…a whole planet?

Let’s start with a common observation that humans are self-absorbed, too self-absorbed…and challenge it: Maybe we got that one wrong, very wrong. Humans are pack animals. Just like wolves and elephants, we’re social. Anthropologists make the case that we are the most social of primates. We are, above all, obsessed with staying inside the pack. We know our preservation depends on its preservation.

Life on earth as we’ve known it is in grave danger because humanity’s hyper-pack—defined as those whose members have the greatest destructive power on our earthly habitat—is heading right over the proverbial cliff. That cliff is climate chaos. That cliff is murderous conflict generated by fear of non-existent scarcity. That cliff is life-destroying inequality so extreme that now eight Homo sapiens control wealth equal to half all 7.6 billion of our species.

Yet, relatively few defy or even call out the anti-life rules and norms driving us over this cliff.  In such a moment, what is the primary moral virtue needed?

Being “good”—kind and honest with those we touch directly—is admirable and desirable, but we need more. It’s time to elevate another virtue: courage. We can be “good” within our pack, but can we break with the pack? Can we stand when we’re the only one standing?

I recall a moment I didn’t.

In 2004, I canvassed door to door in the suburbs of Philly for Democrat Lois Murphy, a distinguished attorney running for a seat in Congress against Republican Jim Gerlach. One evening the community gathered in the social hall of a synagogue to hear the candidates debate.

Taking our seats, we all fell silent as Murphy asked Gerlach to apologize before they began. Robo-calls from his campaign had linked Murphy to the Taliban, and she believed he should accept responsibility. I then recalled earlier in the day canvassing at the door of a man with a threatening dog. He asked: “Are you with the Taliban lady?” As I stood speechless, I remembered that on top of Murphy’s strong legal background, she’d made her mark defending women’s rights. What twisted irony to be linked to the Taliban.

Gerlach refused to apologize, and the debate proceeded.

But burned in my memory is self-recrimination. Why didn’t I simply stand up and declare that I’d remain standing until an apology was forthcoming?  Others would have quickly risen with me, I’m sure. But I didn’t even think of it. Later, I had approached Gerlach and told him his ads were scandalous. For that, I lightly patted myself on the back, but, honestly, I felt crushed by what I had not done.

My point is that in that moment an obvious action didn’t even occur to me because I am, like most of us, programmed to go along with the group, not to make a fuss, not to stand out.

Much later, in another situation in which I was out of synch with the group, I recalled how I’d failed that night in Philly. The still-raw regret stoked my courage, and I did get my hand up to make the challenge.

My point is simple. It’s now time to focus on courage. It makes all other virtues possible.

“Courage is the most important of all the virtues,” the poet Maya Angelou has said, “because without courage you can’t practice any other virtue consistently.”

Whatever it takes, let’s fortify our backbones as part of a rising Democracy Movement. Making pledges not only to ourselves but to others can help. Acknowledging we’re social animals—that’s a given—let’s discover together the thrill of risking hostility, humiliation, and failure to say and to do what we know is necessary to create democracy bringing out the best in us. In the process, we create new “packs” with willing to risk on behalf of life.

Goodness without courage is no longer good enough.

Frances Moore Lappé is the author of nineteen books, beginning with the acclaimed Diet for a Small Planet. Most recently she is the co-author, with Adam Eichen, of the new book, Daring Democracy: Igniting Power, Meaning, and Connection for the America We Want. Among her numerous previous books are EcoMind: Changing the Way We Think to Create the World We Want (Nation Books).  She is co-founder of the Cambridge-based Small Planet Institute.