This Is How Capitalism Kills Us 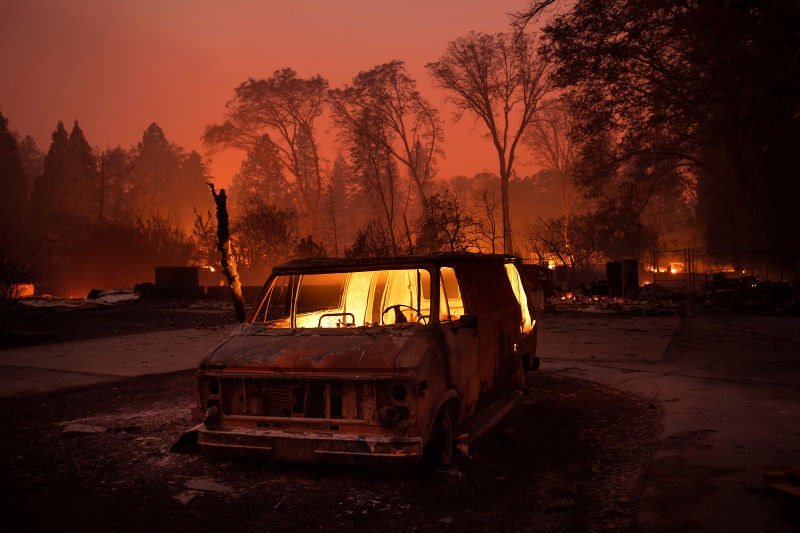 26 Nov 2018 – On Meet the Press yesterday, Utah Senator Mike Lee said about our climate change crisis, “all the proposals I’ve seen so far that would address any of these issues would devastate the U.S. economy.” This is considered a reasonable explanation of maintaining the status quo. This is the insanity built into capitalism.

Lee was specifically explaining why he would not support a carbon tax, the single most direct, rational, and market-friendly way of restricting carbon emissions. The context for the question was the release on Friday of a report from the US government itself saying that, within a century, climate change could cost our country “hundreds of billions of dollars annually” and kill thousands of additional Americans per year.

Mike Lee is a right wing ideologue. But on this issue, his position is the mainstream one. The entire world—led by the rich developed nations, the US in particular—is staring down a huge, slow-moving tidal wave called climate change. We know it is coming. We have been told repeatedly the devastation that it will cause. And yet world leaders collectively go about their business as usual, taking no action concomitant with the level of danger that we all know we are facing. On a very basic level, this is insane. If we were standing on the train track, and we knew the train was coming, and we did not rouse ourselves to step out of the way, we would be suicidal. We are doing exactly that on the issue of climate change. Are we suicidal? No. We are capitalists. And we are following the logic of capitalism straight to hell.

As practiced in America, capitalism incentivizes the maximization of short-term, private profits. This private profit seeking is bolstered by the implied public safety net should anything go wrong, as the financial crisis amply demonstrated. Capitalists operating within the framework of capitalism have every incentive to grab every possible dollar they can as soon as possible and keep them all. Should disaster strike, the government can ride to the rescue. Compensation from investment is supposed to be tied to risk—the higher the risk, the higher the reward. When you have a political system in which it is possible to purchase political power, as we do, you can do something neat: you can shove your risk off onto the government. It is privatized profit and socialized risk. It is the best deal you can get. It is also, at its core, corrupt, the most inhuman manifestation of crony capitalism. But that is what we have, and companies and investors and by extension all of us are engaged in a system that encourages us to drive directly into a wall of doom, rather than, say, allow carbon to be taxed.

The fossil fuel companies and energy and transportation companies and other companies that would be directly impacted by sharp restrictions on carbon emissions see this as a very simple issue within the capitalist framework. A carbon tax or any other drastic measures to address the enormity of climate change would certainly cut into near-term profits. Therefore these measures are bad. But what about the long-term risks? Those are not the concern of the companies or the investors. Those are the concern of the government. The government will be the one that will have to deal with the floods, the hurricanes, the droughts, the fires, the mudslides, the erosion, the rising seas, the displacement, the battle for resources, the heat-induced deaths, the starvation. Such things are not the purview of the corporation nor its investors. The corporation and its investors know that these disasters will come, but not for a while. And if you can make enough money in the meantime, then you personally can be insulated from these downsides. If you make enough money now, you can buy yourself a nice place somewhere safe and warm and stable. You can buy yourself food and comfort and, if need be, protection. You can buy these things on the private market with the short-term profits you made by pushing all of us a little closer to the ditch. You will not be made to suffer the consequences of your business decisions; that will be someone else’s job. You will just privatize those profits, and socialize the risk. This is the only form of socialism that capitalists love.

Within this system, climate change denial and foot-dragging in the face of looming disaster is rational. All the bad things will be someone else’s problem. You just take the money and live a great life. The earth itself has a perfect feedback mechanism: we pollute, and climate change is the feedback. Our economic system lacks this mechanism, because the people who cause the feedback can buy their way out of it.

This, writ large, is what is happening today, and I don’t see any reason why it will stop happening until the people who are making it happen are made to feel the consequences themselves. That means either waiting a few generations until climate change has gotten so bad that nobody can escape its wrath, or changing the way that we operate now so that those who profit by causing or enabling climate change in some way feel the long-term suffering they are creating. This can be done with taxes. It can be done with laws. Or it can be done outside the law. But if it is not done somehow—if people can go on getting rich off of carbon emissions and using those riches to save themselves—why would it ever change?

The business executives and investors and politicians who cooperate in this system are not stupid. Many of them are very intelligent. They know what is happening. They just don’t care. It is sad to say, but there is not much more to it than that. Maybe it is human nature. The reason we build systems, though, is to improve on human nature. A well-designed system can provide a path for us to follow that leads us away from our own natural failings. A poorly designed system allows us to wallow in those failings until we drown. Or burn up, as the case may be.