Truth, Justice, and Public Good: Simone Weil on Political Manipulation, the Dangers of “For” and “Against,” and How to Save Thinking from Opinion

“True attention is a state so difficult for any human creature, so violent, that any emotional disturbance can derail it. Therefore, one must always endeavour strenuously to protect one’s inner faculty of judgment against the turmoil of personal hopes and fears.” 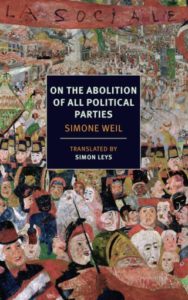 At the age of nineteen, Simone Weil (February 3, 1909–August 24, 1943) placed first in France’s competitive exam for certification in “General Philosophy and Logic”; Simone de Beauvoir placed second. In her short life, Weil went on to become one of the most penetrating and far-seeing minds of her era. Albert Camus lauded her as “the only great spirit of our times.” The Polish poet and Nobel laureate Czesław Miłosz considered her France’s “rare gift to the contemporary world.” She was an idealist who lived out her ideals. Born into a family of Jewish intellectuals, the 24-year-old Weil took a year off teaching to labor incognito in a car factory — despite a rare neuropathy that gave her frequent debilitating headaches — in order to better understand the struggles of the working poor. At twenty-seven, she enlisted as a soldier in the anarchist brigade during the Spanish Civil War. At only thirty-four, she died of starvation in an English sanatorium, where she was being treated for tuberculosis, having refused to receive more food than what her compatriots were rationed in Nazi-occupied France. Along the way, she wrote with uncommon insight and rhetorical rigor about such elemental questions as the essence of attention, the meaning of rights, how to make use of our suffering, and what it means to be a complete human being.

That Weil should languish so underappreciated and obscure today is a tragic function of the dual forces of collective amnesia and the systemic erasure of women’s ideas from the historical record. And yet her ideas, which influenced such luminaries as Hannah Arendt, Susan Sontag, Iris Murdoch, Michel Foucault, Flannery O’Connor, and Cornel West, resonate with intense relevance today. 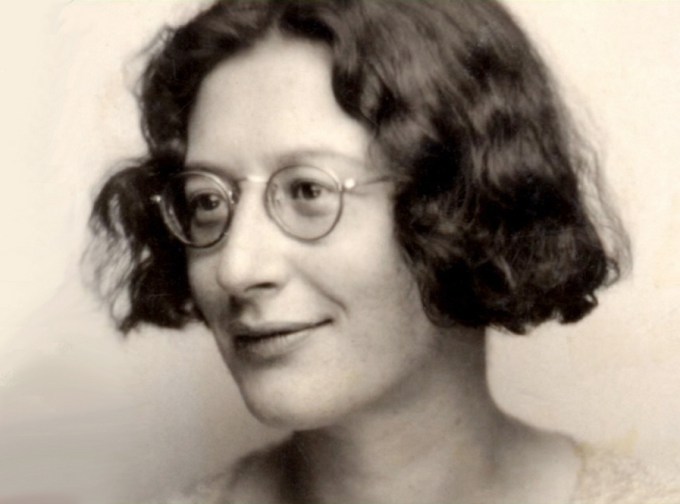 In the final months of her life, as she watched the Nazis devastate humanity and fragment even the rational and the righteous into factions of increasingly divisive opinions, Weil composed a short, searing treatise titled On the Abolition of All Political Parties (public library). It was never published in her lifetime. Nearly a century later, it speaks with astonishing and terrifying precision to the underlying forces ripping our world asunder.

Weil begins by posing the foundational question of whether the apparent evils of political divisiveness can be compensated for by the alleged good of adopting the views of any given party. She writes:

First, we must ascertain what is the criterion of goodness.

It can only be truth and justice; and, then, the public interest.

Democracy, majority rule, are not good in themselves. They are merely means towards goodness, and their effectiveness is uncertain. For instance, if, instead of Hitler, it had been the Weimar Republic that decided, through a most rigorous democratic and legal process, to put the Jews in concentration camps, and cruelly torture them to death, such measures would not have been one atom more legitimate than the present Nazi policies (and such a possibility is by no means far-fetched). Only what is just can be legitimate. In no circumstances can crime and mendacity ever be legitimate.

With these three elemental criteria of truth, justice, and public interest in mind, Weil frames the core characteristics of all political parties:

Nearly a decade before Hannah Arendt composed her masterwork on the origins of totalitarianism, Weil draws the inevitable, devastating conclusion:

As to the third: it is a particular instance of the phenomenon which always occurs whenever thinking individuals are dominated by a collective structure — a reversal of the relation between ends and means.

Everywhere, without exception, all the things that are generally considered ends are in fact, by nature, by essence, and in a most obvious way, mere means. One could cite countless examples of this from every area of life: money, power, the state, national pride, economic production, universities, etc., etc.

Goodness alone is an end.

More than a century after Emerson admonished that “masses are rude, lame, unmade, pernicious in their demands and influence,” Weil adds:

Collective thinking… is an animal form of thinking. Its dim perception of goodness merely enables it to mistake this or that means for an absolute good. 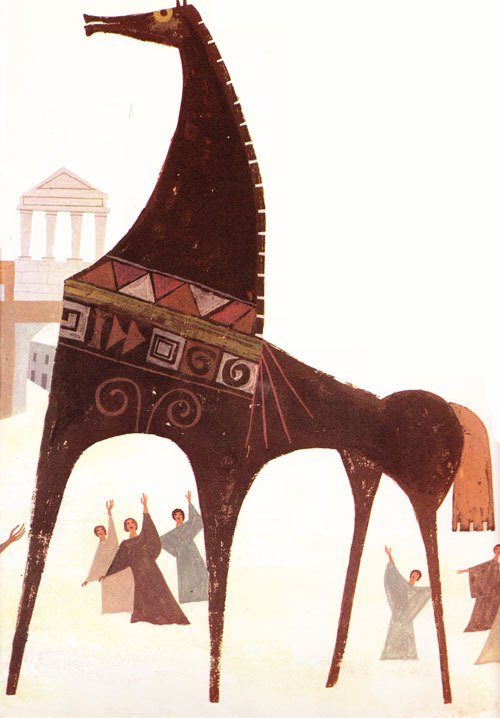 She examines how the second and third defining features of political parties — the determination to influence people’s minds and the ultimate goal of infinite growth — conspire to effect the total manipulation of truth and the corruption of justice:

Once the growth of the party becomes a criterion of goodness, it follows inevitably that the party will exert a collective pressure upon people’s minds. This pressure is very real; it is openly displayed; it is professed and proclaimed. It should horrify us, but we are already too much accustomed to it.

She frames the grim effect on the individual:

A man who has not taken the decision to remain exclusively faithful to the inner light establishes mendacity at the very centre of his soul. For this, his punishment is inner darkness.

With an eye to the three types of lies by which this manipulation occurs — “lying to the party, lying to the public, lying to oneself” — Weil examines the nature and paradoxes of truth:

Truth is all the thoughts that surge in the mind of a thinking creature whose unique, total, exclusive desire is for the truth.

Mendacity, error (the two words are synonymous), are the thoughts of those who do not desire truth, or those who desire truth plus something else. For instance, they desire truth, but they also desire conformity with such or such received ideas.

Yet how can we desire truth if we have no prior knowledge of it? This is the mystery of all mysteries. Words that express a perfection which no mind can conceive of — God, truth, justice — silently evoked with desire, but without any preconception, have the power to lift up the soul and flood it with light.

It is when we desire truth with an empty soul and without attempting to guess its content that we receive the light. Therein resides the entire mechanism of attention.

Perhaps due to her beautifully phrased belief that “attention is the rarest and purest form of generosity,” Weil suggests that protecting our attention from manipulation is our greatest and most generous contribution to public life and public good — something which human nature, so hopelessly governed by hope and fear, makes immensely challenging to achieve and therefore all the more triumphant when achieved:

True attention is a state so difficult for any human creature, so violent, that any emotional disturbance can derail it. Therefore, one must always endeavour strenuously to protect one’s inner faculty of judgment against the turmoil of personal hopes and fears. 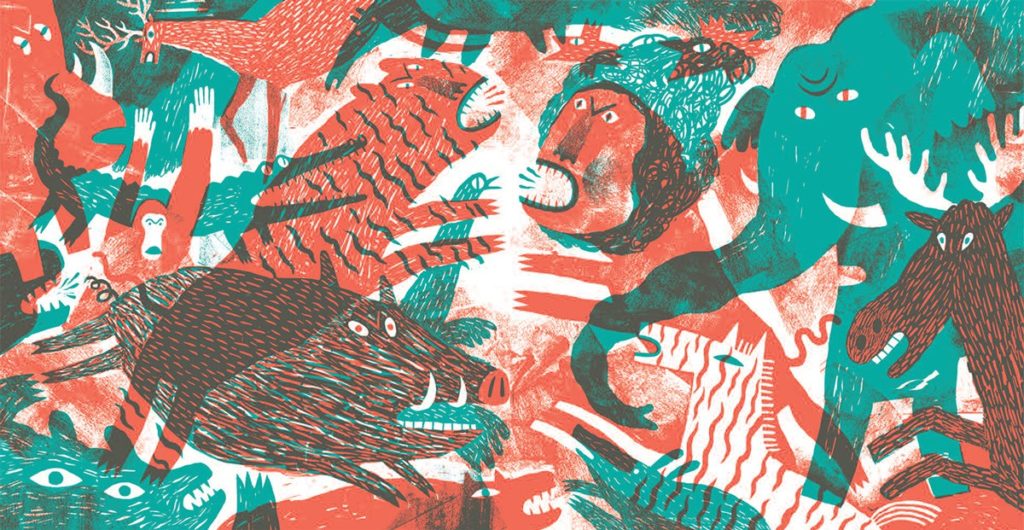 She considers the particular and supreme peril of what philosopher Martha Nussbaum would term, nearly a century later, our political emotions — the unthinking, affect-driven impulse toward belief and action, which politicians so deftly manipulate by playing on our hopes and fears. Weil terms this “collective passion” and writes:

When a country is in the grip of a collective passion, it becomes unanimous in crime. If it becomes prey to two, or four, or five, or ten collective passions, it is divided among several criminal gangs. Divergent passions do not neutralise one another… they clash with infernal noise, and amid such din the fragile voices of justice and truth are drowned.

Collective passion is the only source of energy at the disposal of parties with which to make propaganda and to exert pressure upon the soul of every member.

One recognises that the partisan spirit makes people blind, makes them deaf to justice, pushes even decent men cruelly to persecute innocent targets. One recognises it, and yet nobody suggests getting rid of the organisations that generate such evils.

Intoxicating drugs are prohibited. Some people are nevertheless addicted to them. But there would be many more addicts if the state were to organise the sale of opium and cocaine in all tobacconists, accompanied by advertising posters to encourage consumption.

The most toxic effect of collective passion, Weil argues, is that it narrows the locus of attention to particular points of heightened affect — isolated ideas we feel, or are made to feel, strongly for or against — to the exclusion of all attendant ideas that come bundled in that particular party ideology. People are impelled to join a party or a cause because it speaks to a few things they feel strongly about, but they rarely examine closely all the other ideas the party espouses — including many with which, upon reflection and examination, they might wholly disagree. (We have seen this, for instance, with the tidal shift in support by women who initially voted for Donald Trump, having been drawn to some of his economic campaign promises, either unwitting of or turning a willfully blind eye to his reckless misogyny until its undeniable evils came to eclipse any alleged economic goods promised them.) 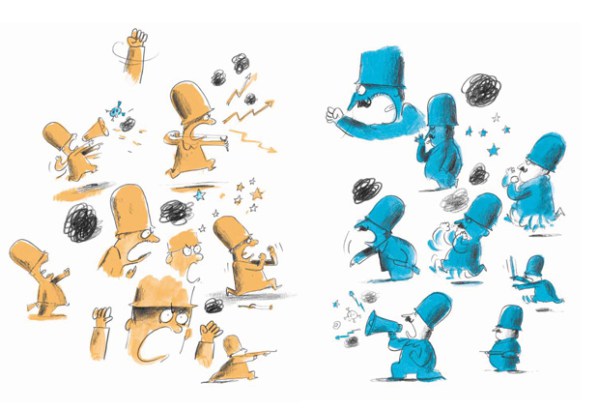 Illustration by Olivier Tallec from Waterloo and Trafalgar

Weil admonishes that while this manipulative fragmentation of thought to the detriment of truth, justice, and public interest originates in our politics, it has permeated nearly every domain of human life:

People have progressively developed the habit of thinking, in all domains, only in terms of being “in favour of” or “against” any opinion, and afterwards they seek arguments to support one of these two options… There are broad-minded people willing to acknowledge the value of opinions with which they disagree. They have completely lost the concept of true and false.

Others, having taken a position in favour of a certain opinion, refuse to examine any dissenting view. This is a transposition of the totalitarian spirit.

When Einstein visited France, all the people who more or less belonged to the intellectual circles, including other scientists, divided themselves into two camps: for Einstein or against him. Any new scientific idea finds in the scientific world supporters and enemies — both sides inflamed to a deplorable degree with the partisan spirit. The intellectual world is permanently full of trends and factions, in various stages of crystallisation.

In art and literature, this phenomenon is even more prevalent. Cubism and Surrealism were each a sort of party. Some people were Gidian and some Maurrassian. To achieve celebrity, it is useful to be surrounded by a gang of admirers, all possessed by the partisan spirit.

However feasible Weil’s central insistence on the abolition of all political parties may be in reality, her deeper point — the importance of refusing to adopt divisive black-and-white opinions among and within us — may be the single most significant, most countercultural act of courage and resistance each of us can perform today. She concludes:

Nearly everywhere — often even when dealing with purely technical problems — instead of thinking, one merely takes sides: for or against. Such a choice replaces the activity of the mind. This is an intellectual leprosy; it originated in the political world and then spread through the land, contaminating all forms of thinking. This leprosy is killing us.

Complement On the Abolition of All Political Parties with Hannah Arendt on lying in politics, Bertrand Russell on our only effective self-defense against propaganda, Walt Whitman on optimism as a mighty force of resistance, and Rebecca Solnit on the culture-shifting power of calling things by their true names, then revisit Weil on the purest, most fertile form of thought and the key to discipline.