Experts predict up to 1,500 individual private flights in and out of airfields serving Swiss ski resort for World Economic Forum. 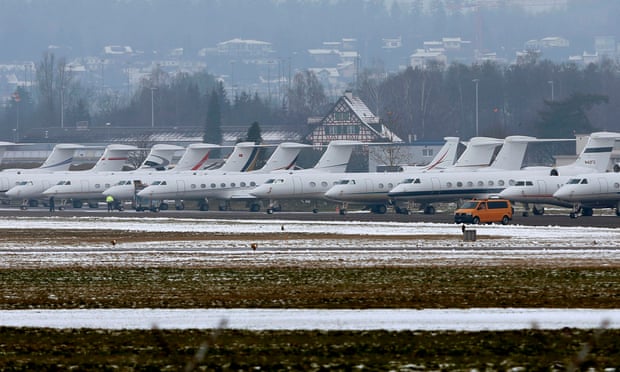 Passenger jets at the Swiss Airforce base in Dübendorf, Switzerland. The airport is one of those used for arrivals and departures at the World Economic Forum in Davos.
Photograph: Arnd Wiegmann/Reuters

22 Jan 2019 – David Attenborough might have urged world leaders at Davos to take urgent action on climate change, but it appears no one was listening. As he spoke, experts predicted up to 1,500 individual private jets will fly to and from airfields serving the Swiss ski resort this week.

Political and business leaders and lobbyists are opting for bigger, more expensive aircrafts, according to analysis by the Air Charter Service, which found the number of private jet flights grew by 11% last year.

“There appears to be a trend towards larger aircraft, with expensive heavy jets the aircraft of choice, with Gulfstream GVs and Global Expresses both being used more than 100 times each last year,” said Andy Christie, private jets director at the ACS.

This is partly due to the long distances travelled, he said, “but also possibly due to business rivals not wanting to be seen to be outdone by one another”. Last year, more than 1,300 aircraft flights were recorded at the conference, the highest number since ACS began recording private jet activity in 2013.

Read more: The new elite’s phoney crusade to save the world – without changing anything

Countries with the highest number of arrivals and departures out of the local airports over the past five years included Germany, France, UK, US, Russia and the United Arab Emirates, according to ACS.

The World Economic Forum disputed ACS’s analysis. . Oliver Cann, of the World Economic Forum, said: “We have been offering incentives to participants to use public transport for some years. We also ask that they share planes if they have to use them; something that has been gaining popularity in recent years.”

The World Economic Forum’s global risk report, released ahead of this week’s meeting, identified environmental challenges, including the failure to mitigate climate change, as top of the list of dangers facing the world economy.

On Monday, broadcaster and naturalist David Attenborough warned that “the Garden of Eden is no more”, and urged political and business leaders to make a renewed push to tackle climate change.

“We have changed the world so much that scientists claim we are in a new geological age, the anthropocene, the age of humans,” he said.

“What we do now, and in the next few years, will profoundly affect the next few thousand years,” added Attenborough, who received a Crystal award from the WEF for his work.

Speaking to journalists after his speech, Attenborough warned that economic models needed to change. “Growth is going to come to an end, either suddenly or in a controlled way.”

This article was updated on 23 January to incorporate a response from the World Economic Forum.