This Map Shows Where in the World the U.S. Military Is Operating 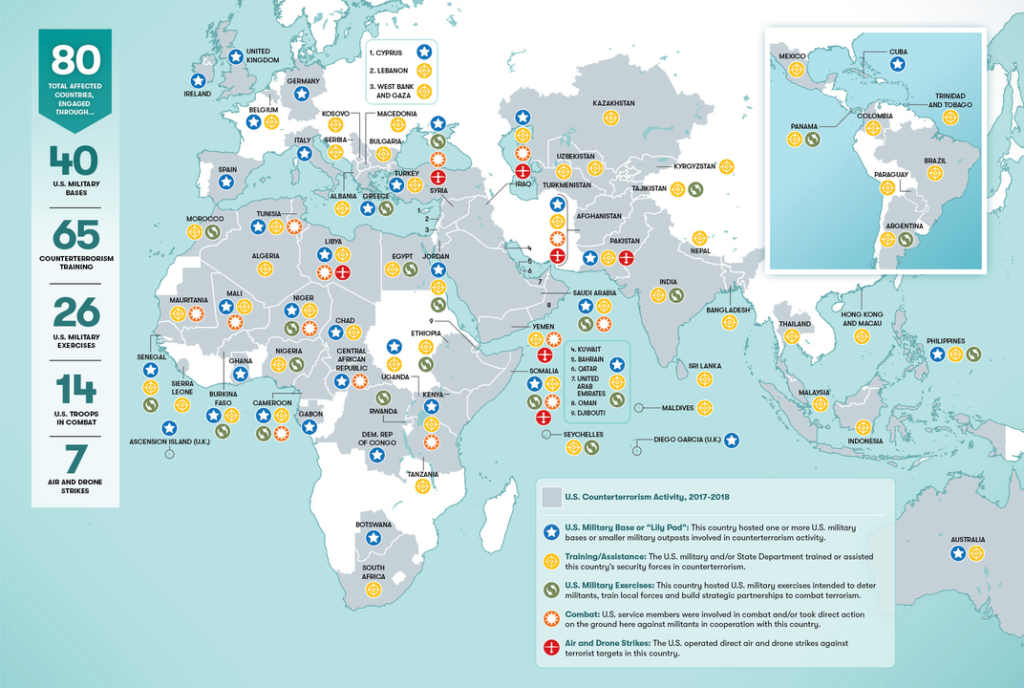 The infographic reveals for the first time that the U.S. is now operating in 40 percent of the world’s nations.

Less than a month after the September 11 terrorist attacks on the United States, U.S. troops—with support from British, Canadian, French, German and Australian forces—invaded Afghanistan to fight Al Qaeda and the Taliban. More than 17 years later, the Global War on Terrorism initiated by President George W. Bush is truly global, with Americans actively engaged in 80 nations on six continents.

This map is the most comprehensive depiction in civilian circles of U.S. military and government actions overseas in the past two years. To develop it, my colleagues and I at Brown University’s Costs of War Project at the Watson Institute for International and Public Affairs, along with Smithsonian magazine, combed through U.S. and foreign government sources, published and unpublished reports, military websites and geographical databases; we contacted foreign embassies in the U.S. and the military’s United States Africa Command; and we conducted interviews with journalists, academics and others. We found that, contrary to what most Americans believe, the war on terror is not winding down—it has spread to more than 40 percent of the world’s countries. The war isn’t being waged by the military alone, which has spent $1.9 trillion since 2001. The State Department has spent $127 billion in the last 17 years to train police, military and border patrol agents in many countries and to develop antiterrorism education programs, among other activities.

Because we have been conservative in our selections, U.S. efforts are likely more extensive than this map shows. Even so, the vast reach evident here may prompt Americans to ask whether the war on terror has met its goals, and whether they are worth the human and financial costs.