How Capitalism Is Killing Us

And how we may have passed the ‘point of no return”. 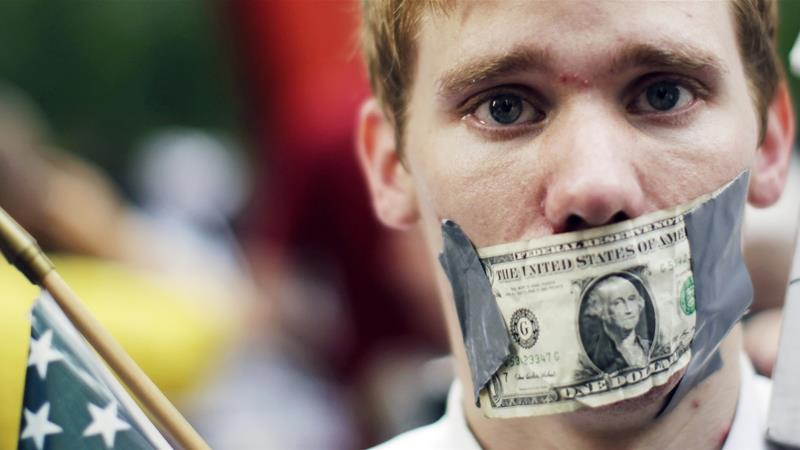 A demonstrator from the Occupy Wall Street campaign seen with a dollar taped over his mouth as he stands near the financial district of New York September 30, 2011. [File: Lucas Jackson/Reuters]

2 Jan 2019 – Hitchhiking through Venezuela some years ago, a friend and I availed ourselves of the novel opportunity to receive free medical care at health clinics established by late President Hugo Chavez, a much-vilified enemy of the international capitalist order.

I had never experienced the danger of free healthcare in my own homeland – that glorious vanguard of capitalism known as the United States – which was too busy waging wars and otherwise facilitating obscene corporate profit accumulation to be bothered with basic human rights. At one Venezuelan clinic, a female doctor from Cuba appropriately remarked that, like the US military, Cuban medics also operated in global conflict zones – but to save lives.

The Earth versus capitalism by Belen Fernandez

A December 2017 statement from the United Nations Special Rapporteur on extreme poverty and human rights notes that, while the US manages to spend “more [money] on national defence than China, Saudi Arabia, Russia, United Kingdom, India, France, and Japan combined”, US infant mortality rates were, as of 2013, “the highest in the developed world”.

The Special Rapporteur provides a barrage of other details from his own visit to the US, during which he was able to observe the country’s “bid to become the most unequal society in the world” – with some 40 million people living in poverty – as well as assess “soaring death rates and family and community destruction wrought by prescription and other drug addiction”.

Capitalism, it seems, is a deadly business indeed.

To be sure, rampant drug use and abuse is hardly surprising in a society in which money and profit have so superseded human life in importance that people often literally cannot afford to live.

Some, however, choose alternate methods of escape from the brutality of reality – as is hinted at by a 2018 study from the US Centres for Disease Control and Prevention (CDC) that indicates skyrocketing suicide levels across the country.

Recent reports that loneliness is in fact life-threatening meanwhile suggest that the neoliberal dismantling of interpersonal bonds and increasing isolation of the individual may also be inconducive to survival.

Trump, tribalism and the end of American capitalism by William G Moseley

Alienation is compounded by the commodification of every aspect of existence and the enshrinement of consumerist materialism as a way of life, not to mention ubiquitous technological distraction and the conversion of human populations into cell phone-glued automatons.

Add to the toxic mix an all-powerful pharmaceutical industry – for which a nation of depressed and otherwise afflicted individuals is an obvious financial boon – and the future appears bleaker than ever.

‘Point of no return’

Of course, it’s not just bodies and communities that the US brand of capitalism is destroying at home and abroad; it’s also the planet itself. Overconsumption, unbridled contamination, and resource exploitation have put us on a fast track to a “point of no return“, as climate scientists have warned.

Back in 1989, US economist Paul Sweezy described capitalism’s view of the natural environment “not as something to be cherished and enjoyed but as a means to the paramount ends of profit-making and still more capital accumulation”.

His summary of the major elements of the environmental crisis already under way three decades ago – from the greenhouse effect brought on by massive fossil-fuel combustion to the pernicious fallout of “predatory agricultural methods” to the “mounting pollution of the oceans once thought to be an infinite repository of all kinds of wastes” – raises the question of whether the point of no return may be already long gone.

After all, now that the oceans and other essential earthly accessories have effectively become plastic, it will be rather difficult to convert them back into non-plastic form – particularly when the global capitalist elite have wholeheartedly embraced the system’s self-destructive logic and apparently don’t mind leaving their progeny to deal with the impending apocalypse.

Kill or be killed

This is even truer since the current leader of the so-called “free world” is the man who previously denounced climate change as a Chinese hoax.

In a December post on the Verso Books website, Ashley Dawson – author of Extreme Cities: The Peril and Promise of Urban Life in the Age of Climate Change – reviews some of Donald Trump’s contributions to the Earth’s devastation by “hyper-capitalism”, such as “efforts to criminalise environmental protest”.

Though Trump’s 2017 withdrawal from the Paris climate agreement may have caused the most ruckus, Dawson notes, “extractivist policies adopted during the second year of his reign of environmental terror included rolling back vehicle fuel economy standards, dismantling rules limiting methane pollution, and jettisoning safety rules governing offshore drilling operations”, among other feats.

And while Trump’s assault on the environment is mirrored by ultra-right counterparts across the globe – like Brazil’s new president Jair Bolsonaro, who has pledged to put an end to the Amazon rainforest as we know it – Dawson stresses that the “ideological opening” for such leaders was facilitated internationally by “centrist and even leftist governments… that remained wedded to fossil capitalism over the last couple of decades”.

It bears emphasising, too, that, in the US, enthusiastic bipartisan support for war – a pillar of the imperialist enterprise – translates into not only mass death for people on the receiving end of bombs and drone attacks, but also large-scale environmental poisoning. As Newsweek observed in 2014, the US Defence Department is one of the top polluters on the planet.

Now, as capitalism continues to kill us, the only real solution – however improbable – is to kill capitalism.