Voltaire and Bertrand Russell, a Comparison: The Crusade against Dogma and Fanaticism (Part 1)

An essay delivered to the Edinburgh Speculative Society during the session 1979-80. The Speculative Society was founded in 1764 ‘for the improvement of literary composition and public speaking’. It was an expression of the Scottish Enlightenment and among the most famous members are Sir Walter Scott and Robert Louis Stevenson; also many prominent members of the Scottish Bench. My own great-grandfather, Professor James Lorimer FRSE, Professor of International Law at the University of Edinburgh from 1862-1890, was a member in the 1840s. His magnum opus in two volumes, The Institutes of the Law of Nations, appeared in 1883 and foreshadowed the United Nations. 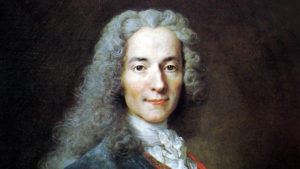 4 Dec 2018 – Mr President, Gentlemen – as research on this essay proceeded as an increasingly frantic rate, your essayist became uncomfortably aware that the scope of his subject could be enlarged upon almost indefinitely, and he was haunted by visions of members of the Society slumped on the benches in the early hours of the morning as he turned the final page of his epic….. I should like to preface the essay with two aphorisms:

Mankind is never refrained from committing any folly of which he is capable.

In the dictionary ‘dogma’ is defined as a principle, a settled opinion, a doctrine laid down by authority. So far as Russell and Voltaire are concerned, it is the last two definitions that illustrate what they were combating since, for them, authority is no substitute for careful observation. Fanaticism is derived from the Latin fanaticus which means ‘belonging to a temple’ and is defined as ‘extravagant or unreasonable zealousness, especially in religion’. It will, I hope, become clear that both men regard the combination of these two factors as responsible for most of the past and present miseries of the human race.

In 1958, Bertrand Russell wrote an article entitled ‘Voltaire’s Influence on Me’. In it he was trying to steer a course ‘between the fanatic who does too much, and the sceptic who does too little.’ He explained that, while his views coincide with those of Voltaire on a number of issues, it was the tone rather than the content of the arguments that he found attractive. It was by reading Voltaire that he discovered the merit of ridicule in that ‘it suggests the absurdity of all dogmas in areas where only doubt or a confession of ignorance is rational’ and he appreciated the quality of Voltaire’s wit ‘which penetrates in a moment to the inner core of humbug beneath pretentious trappings.’ For instance his attacks – similar in vein to those of Moliere – on the medicine of his day: ‘the art of medicine consists of amusing the patient while nature effects the cure’ or ‘doctors pour drugs, of which they know little, to cure diseases of which they know less, into human beings of whom they know nothing;’ in Candide he describes how ‘owing to medicines and bleedings, the hero’s illness became serious;’ in another story he describes ‘one of those fashionable doctors which ladies call in when they are suffering from vapours, or nothing at all.’ People are naturally unwilling to be associated with anything or anybody ridiculous, hence the power of the reductio ad absurdum as a polemical weapon.

Both Russell and Voltaire acted as Socratic gadflies to their respective generations. They were passionate moralists, always ready to take a stand on an issue instead of confining themselves to the realms of theory, like so many of their contemporaries. Voltaire realised that nothing was to be gained by moderation, while Crawshay-Williams characterised Russell’s attitude as one of ‘extreme feeling on a rational basis’ – one incident relates how he interrupted a discussion on mathematical philosophy to get out of the car and fly into a rage at the incompetence of his builder and carpenter – when he got back into the car and immediately resumed the conversation in an apparently unruffled manner, the others were flabbergasted. He explained that it was only by flying into a rage and being unfair that either of the men would be goaded into action, and that within a few days they would have persuaded themselves that they were right anyway.

Historical examples of metaphysical scepticism are not hard to find: one of the earliest examples is the early Greek philosopher Xenophanes, quoted in Russell’s History of Western Philosophy, who explained that:

The gods did not reveal, from the beginning, all things to us, but in the course of time through seeking we may learn and know things better. But as for certain truth, no man has known it, nor shall he know it, neither of the gods, nor yet of the things of which I speak. For even if by chance you were to utter the final truth, he would himself not know it. For all is but a web of guesses.

The metaphysical mystery of the universe can never finally be solved, and seems to lie beyond the capacity of human reason. Numerous other writers expressed similar thoughts, for instance Omar Khayyam:

Into this universe and why not knowing,
Nor whence like water willy-nilly flowing
And out of it by wind upon the waste
I know not whither, willy-nilly blowing.

Or Pascal: ‘the final postulate of reason is to recognise that there are an infinite number of things which elude its grasp.’ Or, in our own day, Albert Camus: ‘the absurd is lucid reason noting its limits.’ Or, finally, Albert Schweitzer: ‘all thinking must renounce the attempt to explain the universe. We cannot understand what happens in the universe… what is full of meaning is united with what is senseless. The spirit of the universe is at once creative and destructive…therefore it remains to us a riddle.’

Voltaire prefers to invert Montaigne’s question ‘What do I know?’ and ask ‘What don’t I know?’ He confesses his inability to understand the nature of matter, still less of spirit, and asserts that the first principles of existence are impenetrable. Thus he conforms, by implication, to the advice of the Buddha not to indulge in fruitless speculation, but rather to strive for liberation; in Voltaire’s case, this meant concentrating on ethics rather than metaphysics. He claims that Zadig was familiar with the laws of nature but ‘savait de la metaphysique ce qu’on en a su dans tous les ages, c’est-a-dire fort peu de choses (knew of metaphysics what has been known in all ages, that is to say very little). In Micromegas he declares that our existence is a point, our duration an instant, our global an atom’, thus foreshadowing the now familiar vast timescales posited by geology and theories of evolution. In addition to the above factors, Russell flourished at a time when metaphysical statements were considered meaningless by many philosophers, and where doubts about the meaning and value of existence were reinforced by stressing the impersonal nature of cosmic processes – human beings are seen as ‘the product of causes which had no prevision of the end they were achieving’, human life is described as brief and powerless and he thought the only firm foundation to be one of unyielding despair.

David Lorimer, MA, PGCE, FRSA is a writer, lecturer and editor who is a Founder of Character Education Scotland, Programme Director of the Scientific and Medical Network and Editor of Paradigm Explorer.