After 18 Years of War, the Taliban Has the Upper Hand in Afghanistan Peace Talks 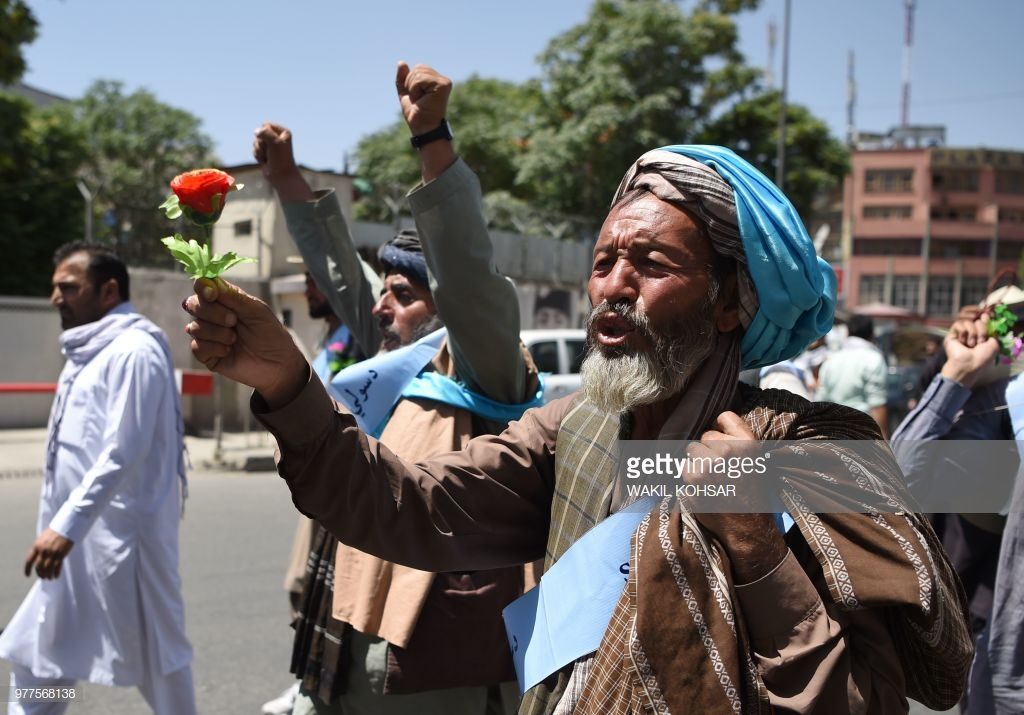 An Afghan peace activist shouts slogans to demand an end to the war during a march from Helmand as he arrives in Kabul on June 18, 2018. Photo: Wakil Kohsar/AFP/Getty Images

15 Feb 2019 – Last year, thousands of young Afghans marched across the country, demanding an end to fighting that has destroyed millions of lives since the Soviet invasion in 1979.

The grassroots peace movement led to a number of local ceasefires throughout the country between Taliban militants and Afghan government soldiers. Young men who had recently been trying to kill one another instead shared food and posed for photographs in the streets of Afghan cities. The scenes broadcast around the world were reminiscent of the famous World War I “Christmas Truce” between German, British, and French soldiers.

That tentative peace effort, a poignant expression of Afghans’ desire to end the violence that has scarred so many families, did not hold. But in recent weeks, there have been increasing signs that another peace deal may be coming together, negotiated from conference tables in Doha and Moscow. The Taliban and a group of former Afghan officials, including former President Hamid Karzai, met in Moscow last week to discuss the future of the country. These talks, along with separate negotiations between the U.S. and the Taliban in Doha, seem to hold out the possibility of ending the violence that has ravaged the country over four decades.

But the talks also offer a serious reality check about the outcome of 18 years of U.S. military presence in Afghanistan. For many observers, the negotiations register as a defeat — recognition that the Taliban has not only survived, but is likely to play an integral role in Afghanistan’s future. It is also clear that there will be a new set of winners and losers in Afghan society, and that Afghans who pegged their hopes to the U.S.-backed government now risk losing limited gains in living standards and civil rights.

Conspicuously absent from the current talks is the Afghan government led by President Ashraf Ghani, which has been denounced as illegitimate by the Taliban and faces an uncertain future following a U.S. departure. U.S. Special Representative for Afghanistan Zalmay Khalilzad announced last month that the Doha talks had succeeded in producing a “draft framework” for ending the war. The full details are still unknown, but comments from Khalilzad and Taliban officials suggest that the agreement will include the withdrawal of U.S. troops, as well as a commitment from the Taliban that Afghanistan will never again be used as a base for international terrorist groups like Al Qaeda.

This compromise could come at a serious cost to Afghans. After 40 years of nonstop war, most crave any respite from violence. But the Trump administration’s approach to the talks so far, as well as the speed with which an agreement seems to be materializing, have stoked fears that the United States is simply looking for a quick exit, even if it means leaving Afghan civilians exposed to armed rivalry between political factions and militant groups.

The goal of transforming Afghanistan into a liberal democracy has proven quixotic, but that doesn’t mean that nothing significant has changed since the Taliban era.

The goal of transforming Afghanistan into a liberal democracy has proven quixotic. That does not mean, however, that nothing significant has changed since the Taliban were deposed. Afghan society has made small but important advances in education, civil liberties, and women’s rights over the past 18 years, despite endemic poverty, government corruption, and violence. A young, urban generation of Afghans has grown up accustomed to having at least some basic freedoms and opportunities that were not possible under the Taliban regime.

It’s unclear what would happen to this new Afghan generation under a government that includes the Taliban, particularly to women, who found themselves totally excluded from public life the last time the Taliban was in power. There are some signs that the movement has evolved and perhaps even moderated some of its tenets over time. But the Taliban is far from a united organization, and it does not have a clear vision for the future of the country. Many of its younger cadres have spent their entire lives at war, with no experience governing a diverse society during peacetime.

“The Taliban who are in contact with the U.S. are mainly moderate Taliban. Even if they reach an agreement with the U.S. to end their support for international terrorists, the key challenge that will remain will be the radical Taliban factions that enjoy safe havens in Pakistan,” says Masoud Andarabi, a former Afghan intelligence official who was recently appointed acting interior minister. 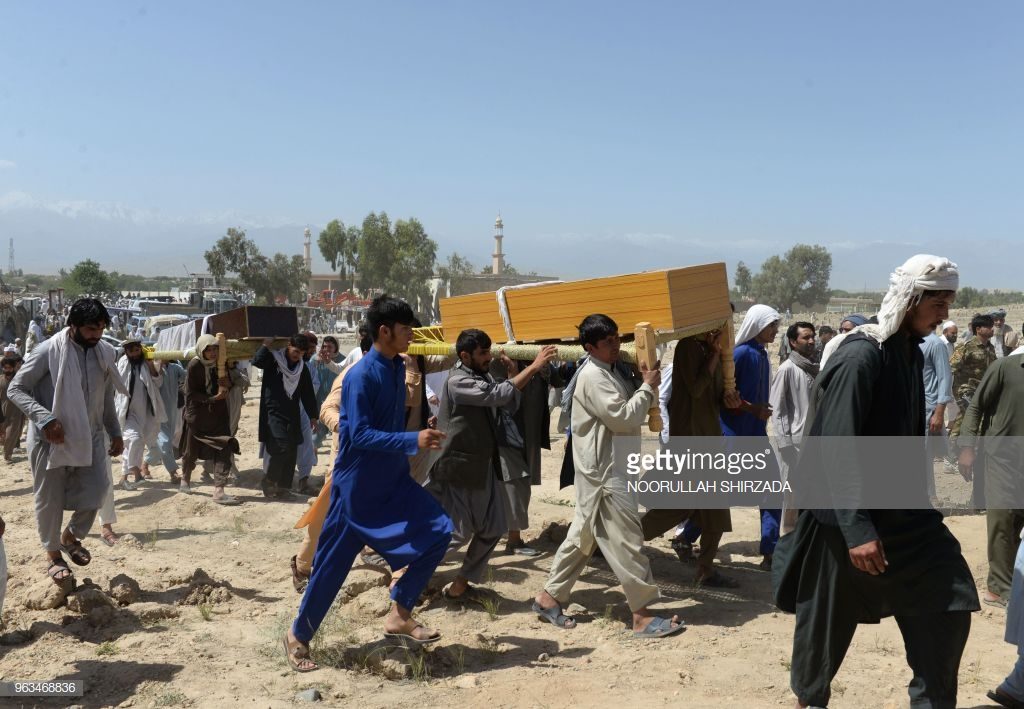 Afghan mourners carry the coffin of one of the nine people killed during an overnight raid by Afghan forces in Chaparhar District on the outskirts of Jalalabad in Nangarhar province on May 29, 2018. Photo: Noorullah Shirzada/AFP/Getty Images

Last year was one of the deadliest for Afghan civilians since with the war began, with thousands killed and maimed by all sides in the fighting. Afghan security forces have also suffered devastating losses; more than 45,000 have been killed since 2014, according to Ghani in a recent statement, a staggering death toll that calls into question whether the Afghan government could even survive without American support.

Decades of war have trapped Afghans in a cycle of violence and revenge. Public sentiment about the U.S. military is divided. Afghans who have flourished under the post-Taliban order see Western forces as protectors of their freedoms, while others say that the American presence has driven countless young recruits into the Taliban’s arms.

A Taliban commander from the Saydabad District, south of Kabul, told The Intercept that he joined the movement after a neighbor gave false information that led to a humiliating U.S. military raid on his family home. Detained by U.S. troops, he spent two years in prison; he was released “without an apology or explanation.” The experience bred lasting anger toward the U.S. and its local Afghan allies, underlining the difficulty of reconciliation even if a peace deal is signed.

“I will not put down my gun until we have kicked out the puppets in Kabul.”

“I won’t put down my gun until every American and every invader is kicked out, so no other Afghan is humiliated and their homes raided. I will not put down my gun until we have kicked out the puppets in Kabul,” the Taliban commander told The Intercept. “There are soldiers and members of the government that are in touch with us; we know they are honest ones that have not harmed anyone and were forced to pick up a gun. But we will not spare the corrupt ones. Those puppets and servants of the West have ruined so many lives. I will fight until my last drop of blood. We are not scared of the drones, the special forces, or helicopters. “

A popular song being shared lately by Taliban fighters extolls the looming victory of the “rural Taliban” over the United States: “The famous America became ready to negotiate,” the song goes. “The disgraced America, the out-of-momentum America. In the beloved country Afghanistan, her red-faced children died.”

A sense of triumphalism among Taliban cadres following a U.S. withdrawal could influence how they govern the country. The previous Taliban regime was notorious for its draconian treatment of women and ethnic minorities. For people in urban centers like Kabul who have come of age in the post-Taliban era, the prospect of returning to life under a militant movement that harshly enforces religious law is unthinkable.

“I was born during the civil war in Kabul. I don’t remember much of the war, but I remember the last years of Taliban regime,” says Fereshtay Khawaray, a 27-year-old schoolteacher in Kabul. “I was not able to come out and play with my friends. We couldn’t go to school, so I was educated secretly. When Kabul fell and the Taliban were gone, it was as if I had a second life. I had freedom.” 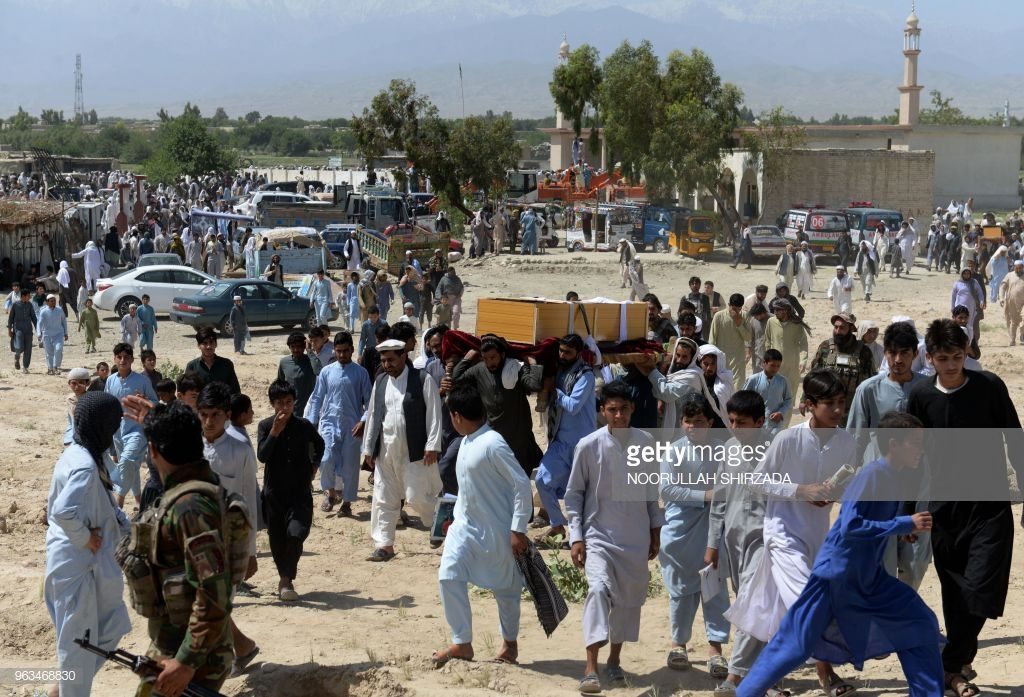 Afghan mourners carry the coffin of one of the nine people killed during an overnight raid by Afghan forces in Chaparhar district on the outskirts of Jalalabad in Nangarhar province on May 29, 2018. (NOORULLAH SHIRZADA/AFP/Getty Images)

Kharaway finished high school and married the man of her choice, a rarity in a place where most unions are arranged. In addition to being an educated woman, she is a member of the Hazara minority, which was persecuted particularly harshly by the Taliban during its reign, and the mother of two young children. She views the prospects of full-scale civil war or unreconstructed Taliban rule as equally untenable.

“I have fears that the war of the 1990s might return, God forbid,” Khawaray said. “The world, Afghan leaders, and the Taliban must provide guarantees. We must make sure that the freedoms and the gains that people like me have benefited from are not lost.”

In recent weeks, Taliban officials have given mixed signals about their vision for the country’s future. Some have floated the possibility of disbanding the Afghan army following a peace deal, as well as scrapping and rewriting the Afghan Constitution. Disbanding the army, in particular would be deeply contentious, with Ghani pointedly denouncing the idea in a recent speech.

There are also fears that the civil rights of Afghan women could end up bargained away at the negotiating table in the name of political expediency. While the Taliban has claimed that it will respect women’s rights in a future government, such promises have been viewed with skepticism.

“The peace process will, if successful, substantially reduce violence and bloodshed, saving thousands of lives every year,” says Shaharzad Akbar, an Afghan women’s rights activist and director of the civil society organization Open Society Afghanistan. “If the process is not inclusive, however, and all concerns are not addressed — the focus just being on an ‘honorable exit’ for Americans and ‘dignified return’ for Taliban — it may create new incentives for conflict, lead to an oppressive and noninclusive government, and, subsequently, disappointment, fragmentation, and migration.”

After nearly two decades, the international community, as well as the U.S. public, has grown bored with the war and exhausted by the work of trying to rebuild Afghanistan. U.S. President Donald Trump successfully campaigned on a promise to end long-running U.S. military engagements at any cost, though this was less as a gesture of peace than a sign of his isolationist “America First” ethos.

For ordinary Afghans, who are also tired of their country’s troubles, the current talks will determine whether their future is marked by continued violence or will afford space for gradual healing and reconciliation. The Taliban has announced that it will meet with U.S. officials in Pakistan later this month to continue the negotiations.

Mariam Bibi is one of millions of Afghans whose lives have been distorted by Afghanistan’s long-running national tragedy. Her son Jawid, a plumber, was killed in a 2017 bombing in Kabul that targeted the city’s Wazir Akbar Khan neighborhood. The blast struck a busy intersection in a diplomatic quarter of the city, killing more than 150 people in one of the deadliest terrorist attacks in Kabul since the war began. The blast was so powerful that Bibi was not even able to retrieve her son’s remains for burial. Her loss is in many ways a microcosm of Afghanistan’s larger national tragedy.

“He was my world, he was my life. He would go every day and work in the city. He would leave by his bicycle and I would kiss him,” 53-year-old Bibi told The Intercept. “I think every mother wants peace. We don’t want more bloodshed, I have lived my life in war, my children too. Today I don’t even have a grave to grieve or cry at. I cry and I pray. What else can a poor mother like me do? May God finally bring peace to the next generation.”