16 Feb 2019 – “The Brazilian cavalry was very incompetent. Competent, yes, was the American cavalry that decimated its Indians in the past and nowadays does not have this problem in their country.” That’s the opinion of Brazil’s far-right President Jair Bolsonaro, expressed on the floor of Congress in 1998. His views appear to have changed little since then; in a video message to supporters 18 years later, he promised to revoke the protected status of an Indigenous reserve in 2019 and in the next breath added, “We’re going to give a rifle and a carry permit to every farmer.”

The protection of Indigenous lands is guaranteed by the Brazilian constitution to preserve the rights and cultures of groups that have been persecuted for centuries. Brazil is home to approximately 900,000 Indigenous citizens from 305 tribes, most of whom live on reserves, but more than half of the locations claimed by Indigenous groups have not yet received government recognition. Bolsonaro, consistent with his anti-Indigenous stance throughout his career, said in a televised interview shortly after his election that if it were up to him, “there won’t be any more demarcations of Indigenous land.”

Any rollback of protections for Indigenous lands would pose a dire threat to the Amazon rainforest, which is being rapidly cut down by ranchers, farmers, and extractive industries.

Bolsonaro’s attitudes toward Brazil’s Indigenous people and their lands are similar to those of the military dictatorship that ruled the country from 1964 to 1985, during which time thousands of tribespeople were killed and thousands more were driven from their lands to make way for large infrastructure projects and farms.

In last year’s election, Bolsonaro campaigned hard on cuts to government funding for Indigenous services and freezing the expansion of federally protected reserves. He immediately moved to make good on these promises after his inauguration last month.

Meanwhile, armed bands of land grabbers, known as “grileiros,” have been staging attacks on Indigenous communities — a pattern of violence that has surged in the wake of Bolsonaro’s election, according to Indigenous leaders and allies interviewed for this article. “With Bolsonaro, the invaders are feeling more at ease,” Bitete Uru-Eu-Wau-Wau, who lives on an Indigenous reserve, told The Intercept by telephone.

He referred to the invaders as “peons” sent by powerful bosses to cut down trees, burn undergrowth, and plant grass for cattle grazing — the first stage in the vastly profitable criminal enterprise of land-grabbing in the Amazon. From there, the lands are often sold several times over on the black market, meaning that poor states lose out on much-needed tax revenue.

Prosecutors have raised the alarm over four territories that have experienced, or are in grave danger of, invasion or attack, while advocacy groups say the number is at least six territories and fear that darker days are still to come. An investigation published this week by the NGO Repórter Brasil found that at least 14 fully protected Indigenous territories are currently under attack. Last month, the image of a bullet-riddled metal plaque reading “National Indigenous Foundation, Protected Territory” made the rounds on WhatsApp, Brazil’s most popular messaging app. The sign marks the entrance to one of several villages in the vast Uru-Eu-Wau-Wau Indigenous reserve, in a lawless region of the Amazonian state of Rondônia, near the Bolivian border.

Uru-Eu-Wau-Wau leaders and local advocacy groups shared the solemn photograph with an accompanying audio message explaining that the gunshots were fresh, the latest attack in an ongoing “invasion” by groups of grileiros.

The tribe fears that a violent conflict with gun-toting outsiders is imminent. Recently, armed with bows and arrows, they managed to expel a group of grileiros from the reserve and filmed the confrontation. The trespassers promised to return.

On his first day as president, Bolsonaro transferred the authority to protect Indigenous lands from Brazil’s National Indian Foundation, or FUNAI, a government entity tasked with the protection of Indigenous communities, to the Ministry of Agriculture, handing a victory to the powerful agribusiness sector that backed his campaign and has its eyes on large tracts of pristine forest. Sydney Possuelo, a veteran Indigenous observer and former FUNAI president, described the move as “the death” of FUNAI, in an interview with the Folha de São Paulo newspaper.

Brazil’s Ministry of Agriculture, now headed by Tereza Cristina Dias, a former member Congress from the powerful “ruralista” agricultural caucus, did not respond to The Intercept’s questions about whether the demarcation of Indigenous lands would continue.

Days after signing the decree, Bolsonaro tweeted a video clip of another one of his ministers who argued in a cable news interview that many of the existing Indigenous reserves were established using fraudulent documents, and called the United Nations Declaration on the Rights of Indigenous Peoples “spurious” and “treasonous.”

The Chamber of Indigenous Peoples and Traditional Communities of Brazil’s Public Prosecutors Office has sent an urgent memo to the justice minister warning that the Uru-Eu-Wau-Wau and three other communities were in danger. The Indigenous Missionary Council, or CIMI, a Catholic aid group, recorded attacks and threats in five states.

“What we are seeing is a new phase of illegal occupations of Indigenous lands,” said Cleber Buzatto, CIMI’s executive secretary.

According to Daniel Azevedo Lôbo, a public prosecutor in Rondônia, the region surrounding the Uru-Eu-Wau-Wau territory is rife with criminal groups constantly looking to illegally exploit Indigenous territories or forest conservation units. In January, he said that dozens of suspected grileiros were planning a major invasion, and another had already taken place this year. Federal Police arrested one suspect, while the rest fled into the forest.

Grileiros “see themselves as workers and producers, but they are criminals,” Lôbo told The Intercept. He said that land grabbers in Rondônia likely felt encouraged by the new administration. “They always look for a way to legitimize their illegal actions,” he said. “The government might have changed, but the law didn’t.”

The 7,200-square mile Uru-Eu-Wau-Wau reserve is larger than the U.S. states of Connecticut and Rhode Island combined. Around 200 tribespeople of different Indigenous subgroups live in villages on the margins, and an unknown number of “isolated” Indigenous people who do not have direct contact with the outside world reside deeper within the borders.

Using satellite imagery, Brazil’s Social Environmental Institute concluded that only 2 percent of the reserve is deforested, as compared to 70 percent in the surrounding area. 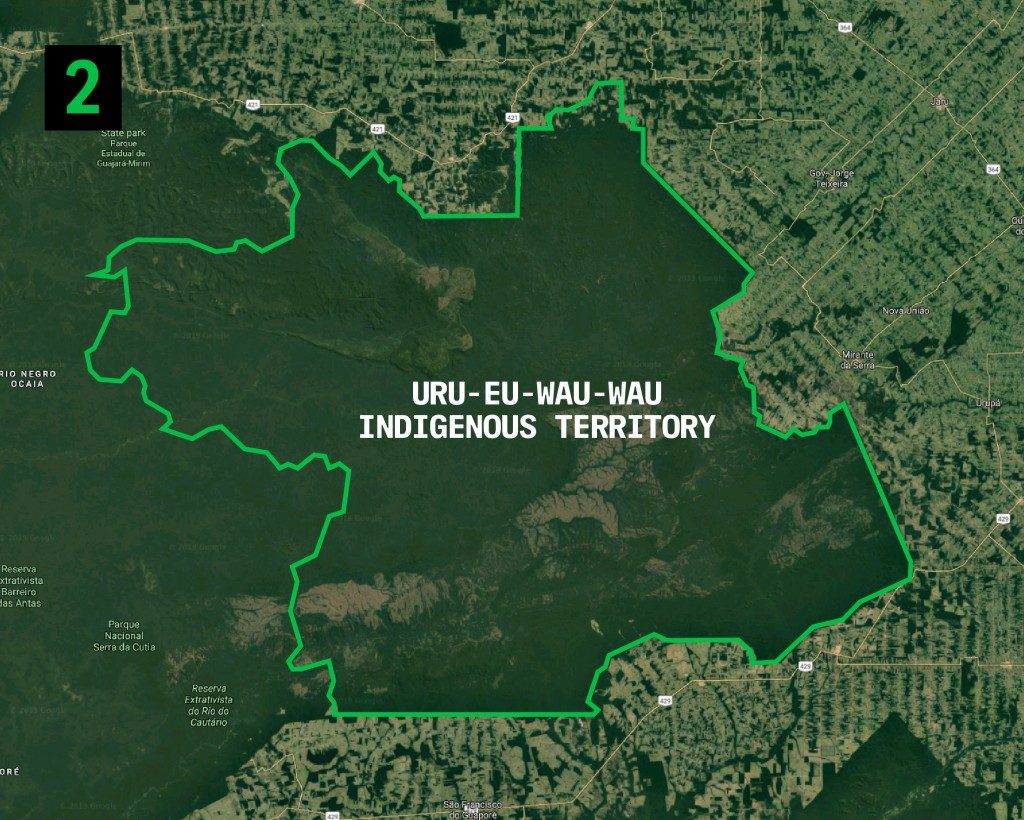 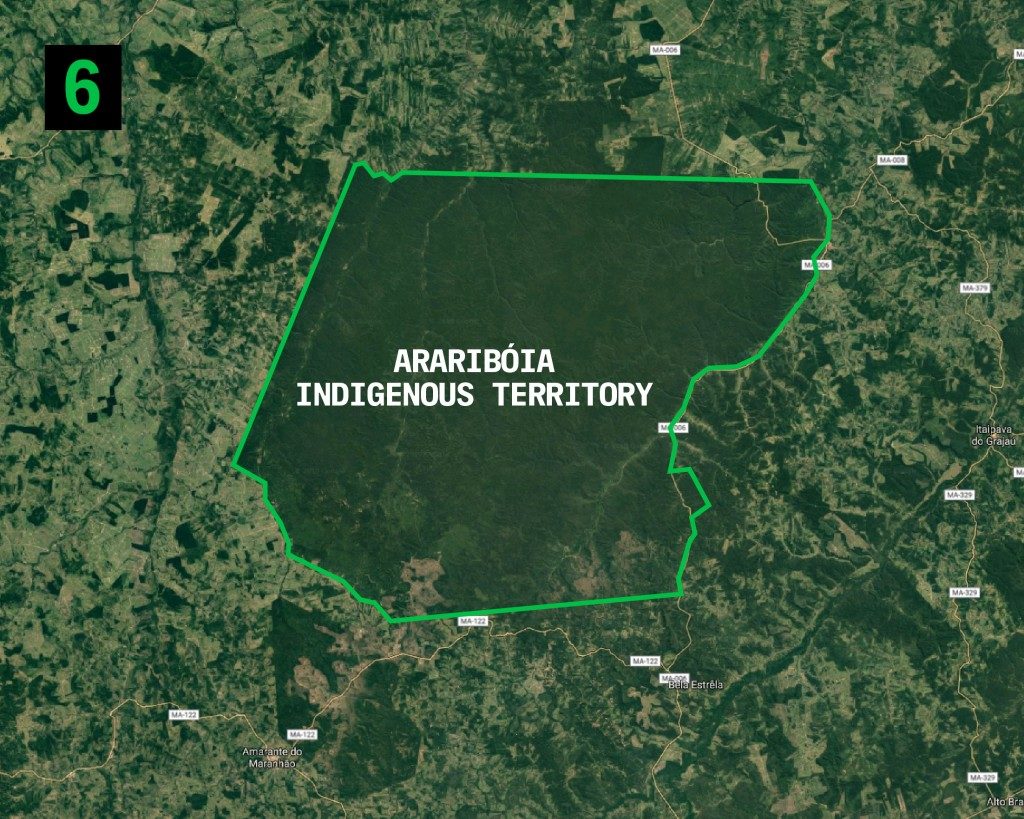 Federally protected Indigenous reserves cover 12 percent of Brazil’s territory and are among the Amazon’s most important defenses against rampant deforestation. The borders between protected and unprotected territories in places like Uru-Eu-Wau-Wau in Rondônia and Araribóia in Maranhão are easily distinguishable in satellite imagery. Images: Google Maps

Rondônia is one of the Brazilian Amazon’s most deforested states, and much of the remaining jungle is in Indigenous lands and federal conservation units, making them popular targets for criminal gangs. By no coincidence, the state recorded 17 murders related to land conflicts in 2017, one of the worst rates in the nation.

The Karipuna Indigenous territory, also in Rondônia, is similarly under assault from land grabbers. Greenpeace’s investigative journalism unit, Unearthed, reported from the territory in 2017 after prosecutors said the tribe — with less than 60 members living on the site — was at risk of “genocide.” “They are close to the village now,” Adriano Karipuna told The Intercept recently. He visited the U.N. headquarters in New York last year to denounce a possible “massacre” against his people.

Federal Police have since seized tractors and other heavy machinery from the nearby community of União Bandeirantes and are investigating three suspects in connection with illegal logging. The Public Ministry, with the support of the Federal Police and FUNAI, is expected to request National Guard troops to defend the reserve.

Next door in Mato Grosso state, prosecutors warned that they would meet any invasion of the Marãiwatsédé reserve of the Xavante people with an “energetic response.” In 2012, farmers illegally occupying the land were expelled by court order. Brazil’s O Globo newspaper reported that Nelson Barbudo — also known as “Bearded Nelson” — the state’s most popular congressperson and Bolsonaro ally, had encouraged the invasion, calling their removal “a crime against producers.”

Twelve hundred miles south, in Rio Grande do Sul state, local prosecutors have opened an investigation into a reported incident in which two hooded men made threats and opened fire at a small Mbyá-Guarani encampment in the capital, Porto Alegre.

In Maranhão state, Claudio da Silva, who leads a local forest guard on the Caru Indigenous territory told The Intercept that a group of farmers that was removed in 2014 following a court decision was threatening to come back. “With the proposals of Bolsonaro, they are organizing to return to the Awá territory,” he said. “We can’t just cross our arms.”

From Bad to Worse

About 0.4 percent of Brazil’s population lives on federally protected Indigenous lands, which cover around 13 percent of national territory and contain some of the nation’s best-maintained forests. Climate scientists consider empowerment of Indigenous people and their lands as an important weapon in the fight against climate change. But regardless of who is running the nation, throughout recent history, those concerns have been sublimated to the short-term economic interests of major industries.

Before Bolsonaro, the situation was already increasingly dire for Brazil’s Indigenous communities as the agribusiness lobby has grown more powerful in state capitals and in the corridors of power in Brasília. In 2017, under President Michel Temer, FUNAI’s budget was cut by nearly half, and a law was passed that effectively gave amnesty to land grabbers who had continuously occupied lands since before 2011. A similar measure had already been passed in 2004.

Invasions of Indigenous lands jumped from 59 in 2016 to 96 in 2017, according to CIMI’s annual report “Violence Against Indigenous People in Brazil.” The study highlighted that “one can see a significant increase in invasions; theft of natural resources such as timber and minerals; illegal hunting and fishing; soil and water contamination by pesticides; and fires, among other criminal actions.” It was also one of Brazil’s bloodiest years on record for land dispute-related violence, with at least 70 killings, according to rural violence watchdog Comissão Pastoral da Terra.

During her mandate, she also inaugurated the controversial Belo Monte Hydroelectric Dam. Before construction began in 2011, environmentalists warned — correctly — that it would cause enormous damage and subsequent deforestation in the region.

But under Bolsonaro, Indigenous leaders in the region believe that the actions of unscrupulous loggers and land grabbers will only get worse.

Leo Xipaya, an Indigenous leader who fought against Belo Monte for years, has no doubts about it: “Bolsonaro’s plans put Indigenous people at risk.”