US Stops All Aid to Palestinians in West Bank and Gaza

The US has confirmed it stopped all aid to Palestinians in the occupied West Bank and Gaza, in a step linked to new anti-terrorism legislation. 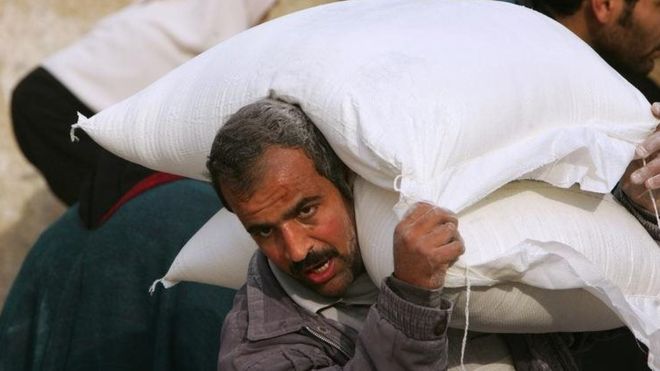 A Palestinian man carries sacks of flour supplied by the UN in Gaza City.
AFP/Getty Images

1 Feb 2019 – More than $60m (£46m) in annual funds for the Palestinian security services has now ended, and – while Israel has backed some previous cuts in US aid for Palestinians – officials have expressed concern about this move.

It is thought that co-operation with Israeli forces, which helps keep relative calm in the West Bank, could be affected.

The Anti-Terrorism Clarification Act (ATCA), passed by Congress and then signed into law by President Donald Trump last year, has just come into force.

This allows Americans to sue those receiving foreign aid from their country in US courts over alleged complicity in “acts of war”.

At a news conference on Thursday, senior official Saeb Erekat said the Palestinian Authority (PA) had sent a letter to the US state department asking them to end funding because of a fear of lawsuits.

“We do not want to receive any money if it will cause us to appear before the courts,” he said.

The PA denies Israeli accusations that it incites militant attacks.

“We are not seeking anything, the Americans have made their decision, but we will continue to participate in the fight against terrorism in the region,” Mr Erekat went on.

He pointed out that there were currently cases against three banks operating in the Palestinian territories before US courts, and that in the past, several attempts to allow US victims of Palestinian attacks to sue the PA and Palestine Liberation Organisation had failed because of a lack of jurisdiction. 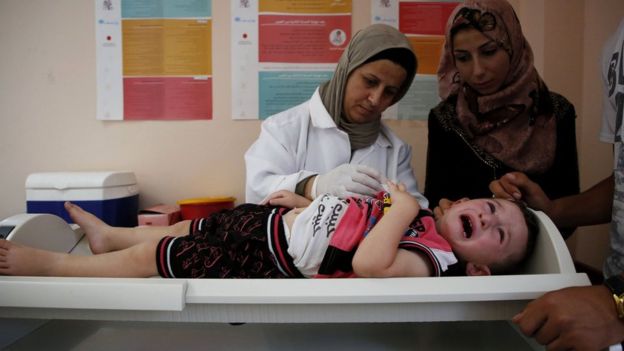 Despite a large hole in its budget, the PA maintains that the halt in US aid will not affect the work of its security forces.

“At the request of the Palestinian Authority, we have wound down certain projects and programmes funded with assistance under the authorities specified in ATCA in the West Bank and Gaza,” a US official told the BBC on Friday.

“All USAID assistance in the West Bank and Gaza has ceased.”

It is not clear how long the halt will remain in effect.

But the Palestinian official said no steps were currently being taken to close the USAID mission in the Palestinian territories and no decision had been made about future staffing at the US embassy in Jerusalem.

Last year, Washington cut hundreds of millions of dollars of aid to the Palestinians, which included funding of humanitarian projects – such as health, education and infrastructure – supported by USAID.

This was widely viewed as a way of pressing Palestinian officials to restart peace talks with Israel and re-engage with the White House ahead of the announcement of its promised Middle East peace plan.

The Trump administration also ended all US funding for the UN agency for Palestinian refugees, UNRWA. It had previously been the largest donor to UNRWA, giving more than $360m in 2017.

Recently US government scholarships awarded to Palestinian students have been suspended and hundreds of Palestinian and foreign workers working on US-funded programmes have lost their jobs.

“Our work was really important. We’d made a big impact but now we’re stopping a lot of our projects in the middle,” said one Palestinian whose position in law and order supported by USAID was terminated this week.

“We were really helping to build the capacity of the Palestinian police and prosecutors, helping them to carry out their investigations and daily work,” the man said. “It’s a huge setback.”

US support for creating professional Palestinian security services dates back to the creation of the PA after the breakthrough 1993 Oslo Peace Accords.

While an EU-funded programme has offered training to civil police, the US focused on the national security forces, intelligence and presidential guard.

Reports suggest that Palestinian, US and Israeli officials have been seeking means to keep sending money to these security forces in the West Bank.

Speaking on Israeli radio on Thursday, security cabinet minister Yuval Steinitz said “we will find a solution”, adding that he could not go into details.