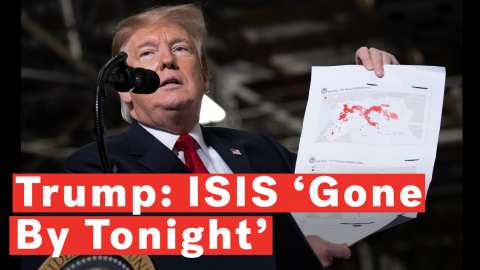 22 Mar 2019 – President Donald Trump has repeatedly declared victory over the Islamic State militant group (ISIS) throughout his term, even as embattled jihadis continued to put up resistance to U.S.-backed forces.

Upon his arrival in Palm Beach, Florida, on Friday, Trump once again pronounced ISIS dead to reporters, touting a map purporting to show the total collapse of the militants’ self-proclaimed caliphate that once spanned large areas of Iraq and Syria from 2014—the year former President Barack Obama launched a U.S.-led coalition to defeat the group—until “last night.” “Congratulations,” Trump said, “you guys can have the map.”

The president made a similar announcement Wednesday during a visit to a tank factory in Lima, Ohio. There, too, he showed off a map, except this one compared the “physical caliphate” between 2017—the year Trump took office—and this year, which continued to show large gray zones of “residual ISIS presence” absent from Friday’s map.

Trump ignored those regions in his remarks, indicating only “a tiny spot” that represented the final ISIS stronghold of Baghouz in Syria’s far eastern Deir ez-Zor province. He predicted that “the caliphate is gone as of tonight” and, in comments that have become familiar to observers, the White House declared Friday that ISIS was “100 percent defeated.” 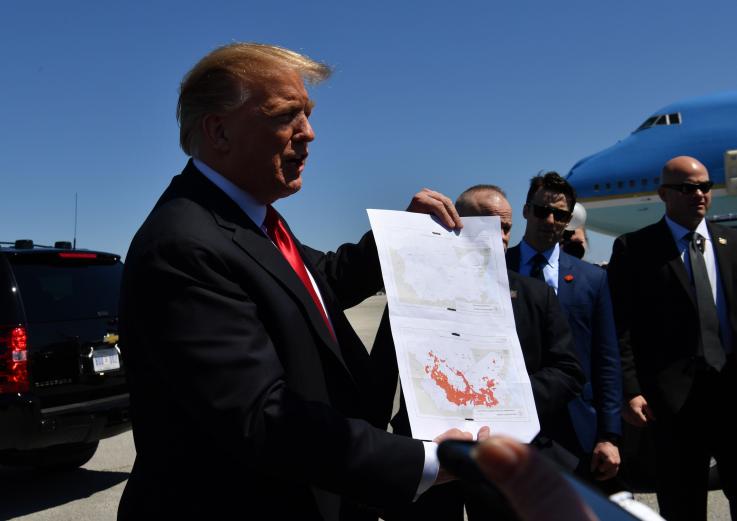 President Donald Trump with a map indicating the end of ISIS, arriving at Florida’s Palm Beach International Airport on March 22. The above graphic indicates the jihadis’ territory across Iraq and Syria as of 2019, while below shows the group’s presence in 2014. NICHOLAS KAMM/AFP/Getty Images

Trump inherited Obama’s battle against ISIS at the peak of its intensity. The Republican leader took the reigns of Operation Inherent Resolve just as allied Iraqi and Syrian forces were approaching the major jihadi strongholds of Mosul and Raqqa, introducing a deadly urban phase of the fight that saw a massive uptick in casualties. ISIS lost control of its largest city in Iraq in July 2017, and its de facto capital in Syria in October 2017.

The following month, the Syrian government—which waged a separate campaign backed by Iran and Russia against ISIS and other, once-U.S.-backed rebels—declared victory over ISIS. A month after that, the Iraqi government made its own victory speech. Even Russian President Vladimir Putin claimed that he and his allies “defeated the most battle-ready grouping of international terrorists” that same December, more than a year ago.

The White House responded with skepticism, with a National Security Council spokesperson telling Reuters that “Russian declarations of ISIS’s defeat are premature.” Trump himself, however, said that same day that the U.S. had “won in Syria, we’ve won in Iraq” against ISIS. He told reporters on Air Force One the previous month that “ISIS is virtually defeated in the Middle East.”

As the U.S.-backed Iraqi military and Iran-backed militias supporting them consolidated their gains in early 2018, the conflict in Syria saw renewed fighting between the U.S.-backed Kurds and fellow U.S. ally Turkey, which branded some of them terrorists due to alleged thinks to a separatist insurgency at home. The Syrian Democratic Forces, a mostly Kurdish militia operating with the U.S.-led coalition’s support, continued to battle ISIS, while at the same time facing off with Turkish troops and allied Islamist rebels formerly supported by U.S. as the separate pro-Syrian government campaign tackled insurgents and jihadis alike. 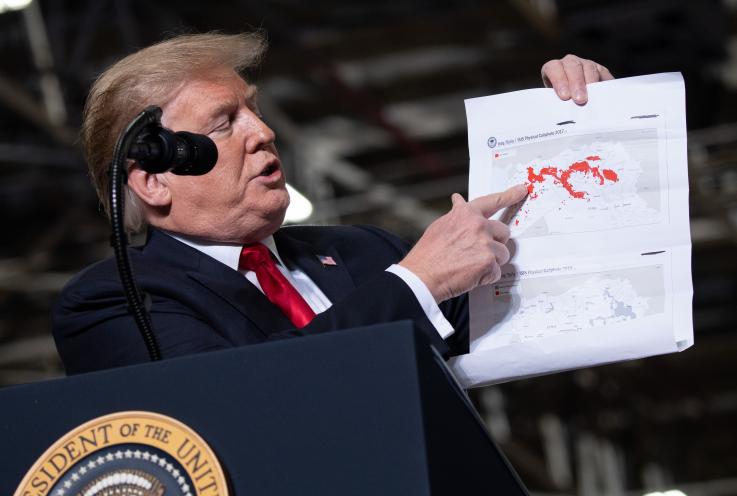 President Donald Trump holds up a map detailing territory losses by ISIS in Syria as he speaks following a tour of the Lima Army Tank Plant at Joint Systems Manufacturing in Lima, Ohio, March 20. This map compared losses from 2017—the first year of Trump’s presidency—to 2019 and included large gray splashes of “residual ISIS presence” omitted from the March 22 map. SAUL LOEB/AFP/Getty Images

Though the conflict had grown more complex, ISIS had clearly become the biggest loser after seven years, and just shy of the March 15 anniversary of the rebel and jihadi uprising that sparked the unrest, Trump told a crowd gathered in Ohio that the U.S. would be “coming out of Syria, like, very soon.” He told his defense officials the following month that the U.S. had “beaten ISIS,” taking “just about 100 percent of the caliphate.”

He reversed course on the withdrawal shortly afterward, launching new strikes against the Syrian government in response to an alleged chemical weapons attack and emphasizing the need to curb growing Iranian influence in Syria. Still, he continued to boast his victory against ISIS throughout the year.

He told a press a September 2018 press conference in New York that “we have defeated ISIS, essentially, very short while ago in the Middle East.” The following month, told the Associated Press “we’ve defeated ISIS, ISIS is defeated in all of the areas that we fought ISIS, and that would have never happened under President Obama.” Trump was soon joined by Turkish President Recep Tayyip Erdoğan, who proclaimed “there is no ISIS in Syria” during a speech in November.

The real coup came in December. Trump once again proclaimed that he had “defeated ISIS in Syria” and, for the second time, called for a withdrawal from the country as battling the jihadis was his “only reason for being there.” Those Twitter remarks reportedly came as a shock to his top generals—like Secretary James Mattis, who resigned days later—and foreign policy officials, prompting Secretary of State Mike Pompeo and National Security Adviser John Bolton to quickly set out on Middle East tours to reassure regional allies. 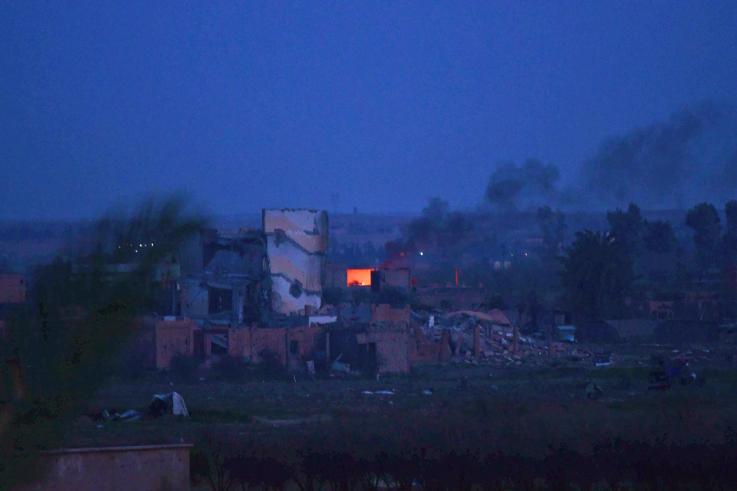 Trump appeared to again step back as the White House announced that around 200 troops would remain in Syria, which was joined by Russia and Iran in again calling for an immediate U.S. exit. Trump told NBC News in January that he had “beaten ISIS,” but speaking before members of the U.S.-led coalition early last month, he said that “it should be formally announced sometime probably next week that we will have 100 percent of the caliphate.”

The president signaled that his premonition came true at the beginning of this month, telling troops at Joint Base Elmendorf-Richardson in Anchorage, Alaska, that “you kept hearing it was 90 percent, 92 percent,” but now “100 percent” of the so-called caliphate had been destroyed. The statement came the same day that Syrian Democratic Forces commander Mazloum Kobani announced his fighters had just begun the “operation to clear the last remaining pocket of ISIS” in the village of Baghouz.