John Steinbeck on Good and Evil, the Necessary Contradictions of the Human Nature, and Our Grounds for Lucid Hope

“All the goodness and the heroisms will rise up again, then be cut down again and rise up. It isn’t that the evil thing wins — it never will — but that it doesn’t die.”

There are events in our personal lives and our collective history that seem categorically irredeemable, moments in which the grounds for gratefulness and hope have sunk so far below the sea level of sorrow that we have ceased to believe they exist. But we have within us the consecrating capacity to rise above those moments and behold the bigger picture in all of its complexity, complementarity, and temporal sweep, and to find in what we see not illusory consolation but the truest comfort there is: that of perspective.

John Steinbeck (February 27, 1902–December 20, 1968) embodies this difficult, transcendent willingness in an extraordinary letter to his friend Pascal Covici — who would soon become his literary fairy godfather of sorts — penned on the first day of 1941, as World War II was raging and engulfing humanity in unbearable darkness. Found in Steinbeck: A Life in Letters (public library) — which also gave us the beloved writer on the difficult art of the friend breakup, his comical account of a dog-induced “computer crash” decades before computers, and his timeless advice on falling in love — the letter stands as a timeless testament to the consolatory power of rehabilitating nuance, making room for fertile contradiction, and taking a wider perspective. 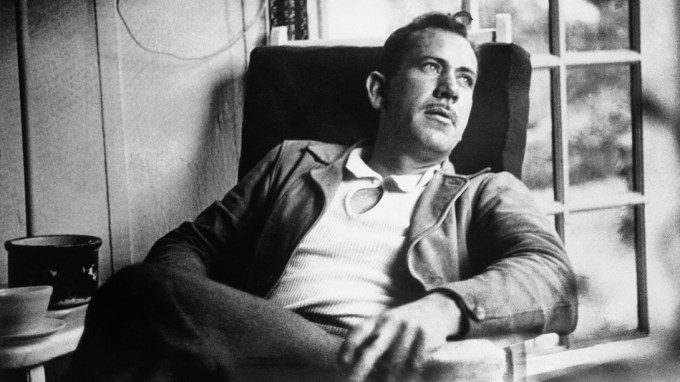 Speaking of the happy new year, I wonder if any year ever had less chance of being happy. It’s as though the whole race were indulging in a kind of species introversion — as though we looked inward on our neuroses. And the thing we see isn’t very pretty… So we go into this happy new year, knowing that our species has learned nothing, can, as a race, learn nothing — that the experience of ten thousand years has made no impression on the instincts of the million years that preceded.

But Steinbeck, who devoted his life to defending the disenfranchised and celebrating the highest potentiality of the human spirit, refuses to succumb to what Rebecca Solnit has so aptly termed the “despair, defeatism, cynicism[,] amnesia and assumptions” to which we reflexively resort in maladaptive self-defense against overwhelming evil. Instead, fifteen centuries after Plato’s brilliant charioteer metaphor for good and evil, Steinbeck quickly adds a perceptive note on the indelible duality of human nature and the cyclical character of the civilizational continuity we call history:

Not that I have lost any hope. All the goodness and the heroisms will rise up again, then be cut down again and rise up. It isn’t that the evil thing wins — it never will — but that it doesn’t die. I don’t know why we should expect it to. It seems fairly obvious that two sides of a mirror are required before one has a mirror, that two forces are necessary in man before he is man. I asked [the influential microbiologist] Paul de Kruif once if he would like to cure all disease and he said yes. Then I suggested that the man he loved and wanted to cure was a product of all his filth and disease and meanness, his hunger and cruelty. Cure those and you would have not man but an entirely new species you wouldn’t recognize and probably wouldn’t like.

Steinbeck’s point is subtle enough to be mistaken for moral relativism, but is in fact quite the opposite — he suggests that our human foibles don’t negate our goodness or our desire for betterment but, rather, provide both the fuel for it and the yardstick by which we measure our moral progress.

He wrests out this inevitable interplay of order and chaos the mortal flaw of the Nazi regime and the grounds for hope toward surviving the atrocity of WWII, which, lest we forget, much of the world feared was unsurvivable in toto:

It is interesting to watch the German efficiency, which, from the logic of the machine is efficient but which (I suspect) from the mechanics of the human species is suicidal. Certainly man thrives best (or has at least) in a state of semi-anarchy. Then he has been strong, inventive, reliant, moving. But cage him with rules, feed him and make him healthy and I think he will die as surely as a caged wolf dies. I should not be surprised to see a cared for, thought for, planned for nation disintegrate, while a ragged, hungry, lustful nation survived. Surely no great all-encompassing plan has ever succeeded.

Mercifully, Steinbeck was right — the Nazis’ grim world domination plan ultimately failed, humanity as a whole survived these unforgivable crimes against it (though we continually fail to sufficiently reflect upon them), and we commenced another revolution around the cycle of construction and destruction, creating great art and writing great literature and making great scientific discoveries, all the while carrying our parallel capacities for good and evil along for the ride, as we are bound to always do.

So when we witness evil punctuate the line of our moral and humanitarian progress, as we periodically do, may we remember, even within the most difficult moments of that periodicity, Steinbeck’s sobering perspective and lucid faith in the human spirit.

Complement this particular fragment of the wholly magnificent Steinbeck: A Life in Letters with Albert Camus on strength of character amid difficulty, Hannah Arendt on how we humanize each other, Joseph Brodsky on the greatest antidote to evil, Toni Morrison on the artist’s task in troubled times, and Rebecca Solnit on our grounds for hope in the dark.