Nobel-Winning Physicist Niels Bohr on Subjective vs. Objective Reality and the Uses of Religion in a Secular World

“The fact that religions through the ages have spoken in images, parables, and paradoxes means simply that there are no other ways of grasping the reality to which they refer. But that does not mean that it is not a genuine reality. And splitting this reality into an objective and a subjective side won’t get us very far.” 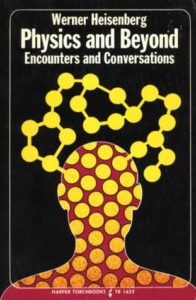 In the autumn of 1911, just as the dawn of quantum mechanics and Einstein’s groundbreaking theory of relativity were unsettling our understanding of existence, some of the world’s most influential physicists were summoned to Brussels for the Solvay Conference — an invitation-only gathering that would become a turning point for modern physics and our basic understanding of reality. The conference was such a towering success that it became a regular event, with twenty-five installments over the next century. The most famous was the fifth, convened in 1927 and chaired by the Dutch Nobel laureate Hendrik Lorenz, whose transformation equations had become the centerpiece of Einstein’s theory of special relativity. Of the 29 attendees that year, 17 would become Nobel laureates; Marie Curie, the sole woman since the inaugural gathering, would become the only scientist to win two Nobel Prizes in two different disciplines. (It was at the first Solvay Conference that Curie had met Einstein — the inception of a lifelong friendship in the course of which he would buoy her during a crisis with his splendid advice on how to handle haters.) 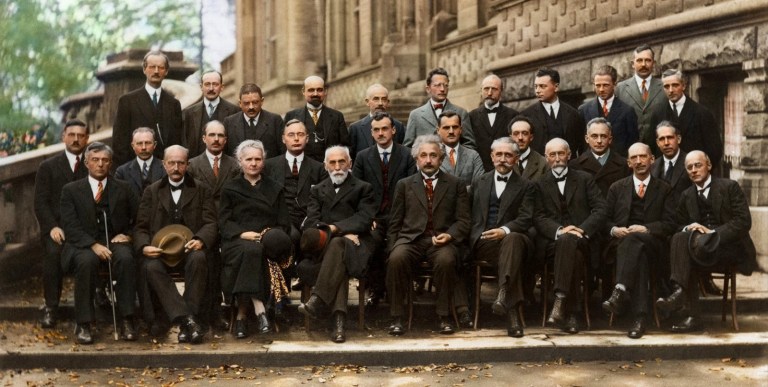 One evening during the 1927 conference, some of the younger attendees — including twenty-seven-year-old Wolfgang Pauli, who was yet to co-invent synchronicity with Carl Jung, and twenty-six-year-old Werner Heisenberg, who had just published his revolutionary uncertainty principle earlier that year — stayed up at the hotel lounge and launched into a swirling conversation at the borderline of physics and metaphysics, ignited by the young physicists’ unease about Einstein’s views on God. (Three years later, Einstein himself would traverse that borderline in his historic conversation with the Indian poet and philosopher Tagore, the first non-European to win the Nobel Prize in Literature.) They collided with the difficulty of reconciling science and religion, some adamantly insisting that the two were simply incompatible, for religion is a vestige of a pre-scientific world of superstition, while others suggesting that science can never supplant but can only complement the essential moral guidance by which theology strengthens society.

The unresolved question stayed with Heisenberg. After the conference, he recounted the conversation to quantum theory founding father and Nobel laureate Niels Bohr (October 7, 1885–November 18, 1962). Bohr surprised him with a nuanced and uncommonly insightful take on the subject, which Heisenberg recounts in Physics and Beyond: Encounters and Conversations (public library) — part of the pioneering World Perspectives series envisioned by philosopher Ruth Nanda Anshen as a canon of books by the world’s great “spiritual and intellectual leaders who possess full consciousness of the pressing problems of our time with all their implications,” with a board of editors including Robert Oppenheimer and Bohr himself. 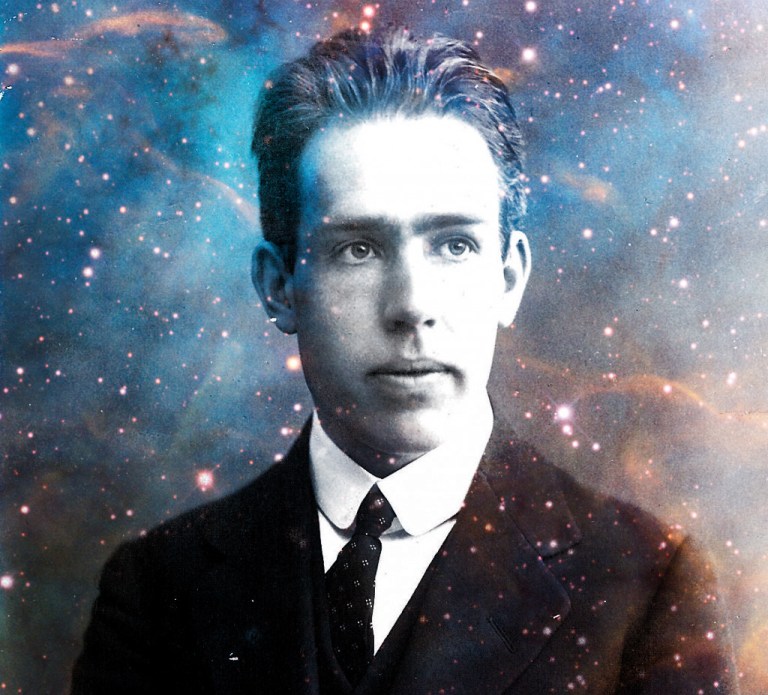 Niels Bohr as a young man

We ought to remember that religion uses language in quite a different way from science. The language of religion is more closely related to the language of poetry than to the language of science. True, we are inclined to think that science deals with information about objective facts, and poetry with subjective feelings. Hence we conclude that if religion does indeed deal with objective truths, it ought to adopt the same criteria of truth as science. But I myself find the division of the world into an objective and a subjective side much too arbitrary. The fact that religions through the ages have spoken in images, parables, and paradoxes means simply that there are no other ways of grasping the reality to which they refer. But that does not mean that it is not a genuine reality. And splitting this reality into an objective and a subjective side won’t get us very far.

With an eye to the monumental impact of Einstein’s relativity and to the profound shift in thought which quantum theory’s notion of complementarity introduced, Bohr adds:

That is why I consider those developments in physics during the last decades which have shown how problematical such concepts as “objective” and “subjective” are, a great liberation of thought. The whole thing started with the theory of relativity. In the past, the statement that two events are simultaneous was considered an objective assertion, one that could be communicated quite simply and that was open to verification by any observer. Today we know that “simultaneity” contains a subjective element, inasmuch as two events that appear simultaneous to an observer at rest are not necessarily simultaneous to an observer in motion. However, the relativistic description is also objective inasmuch as every observer can deduce by calculation what the other observer will perceive or has perceived. For all that, we have come a long way from the classical ideal of objective descriptions.

In quantum mechanics the departure from this ideal has been even more radical. We can still use the objectifying language of classical physics to make statements about observable facts. For instance, we can say that a photographic plate has been blackened, or that cloud droplets have formed. But we can say nothing about the atoms themselves. And what predictions we base on such findings depend on the way we pose our experimental question, and here the observer has freedom of choice. Naturally, it still makes no difference whether the observer is a man, an animal, or a piece of apparatus, but it is no longer possible to make predictions without reference to the observer or the means of observation. To that extent, every physical process may be said to have objective and subjective features. The objective world of nineteenth-century science was, as we know today, an ideal, limiting case, but not the whole reality. Admittedly, even in our future encounters with reality we shall have to distinguish between the objective and the subjective side, to make a division between the two. But the location of the separation may depend on the way things are looked at; to a certain extent it can be chosen at will.

This, Bohr notes, is why the language of objectivity doesn’t belong in religious rhetoric — religion and its pluralities are best understood, and best applied to human life as an instrument of moral enrichment rather than one of dogmatic constriction, through the lens of complementarity:

The fact that different religions try to express this content in quite distinct spiritual forms is no real objection. Perhaps we ought to look upon these different forms as complementary descriptions which, though they exclude one another, are needed to convey the rich possibilities flowing from man’s relationship with the central order. 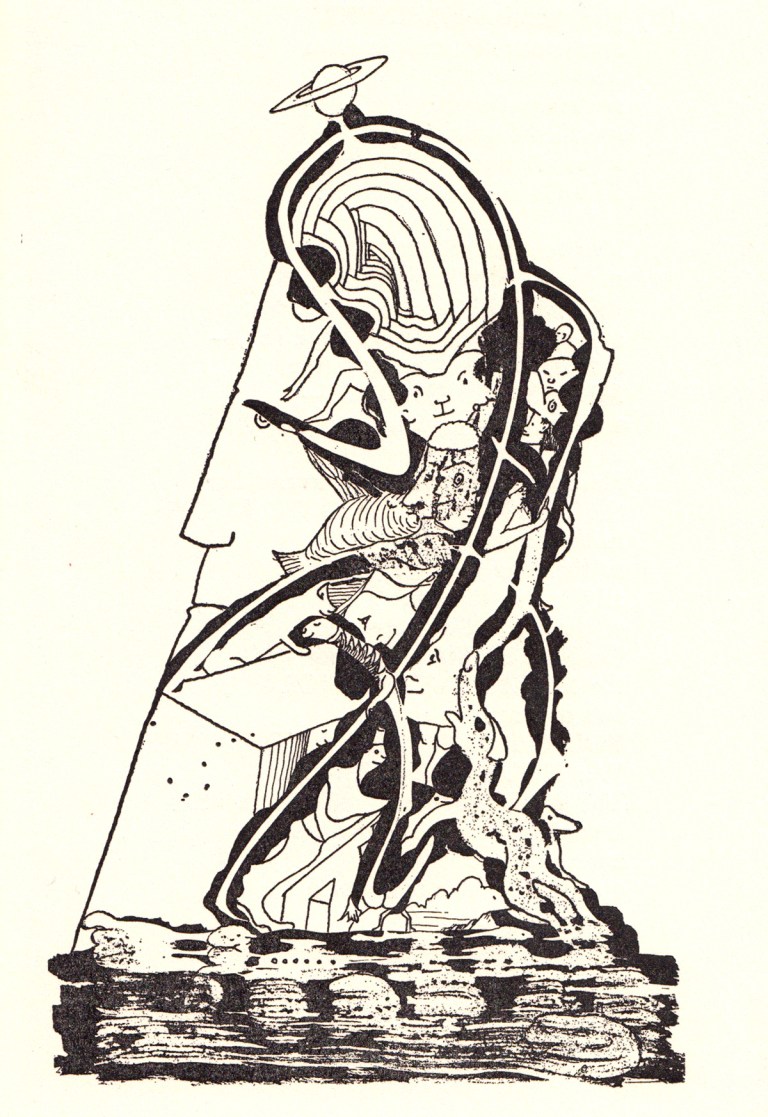 Illustration by Hugh Lieber from Human Values and Science, Art and Mathematics by Lillian Lieber

A quarter century before mathematician Lillian Lieber demonstrated how mathematical abstractions like infinity, which have no correlate in physical reality, offer an analogue for moral questions, Bohr considers whether or not the tenets of religion can similarly offer useful abstractions, even though they are not to be taken as objective truth:

In mathematics we can take our inner distance from the content of our statements. In the final analysis mathematics is a mental game that we can play or not play as we choose. Religion, on the other hand, deals with ourselves, with our life and death; its promises are meant to govern our actions and thus, at least indirectly, our very existence. We cannot just look at them impassively from the outside. Moreover, our attitude to religious questions cannot be separated from our attitude to society. Even if religion arose as the spiritual structure of a particular human society, it is arguable whether it has remained the strongest social molding force through history, or whether society, once formed, develops new spiritual structures and adapts them to its particular level of knowledge. Nowadays, the individual seems to be able to choose the spiritual framework of his thoughts and actions quite freely, and this freedom reflects the fact that the boundaries between the various cultures and societies are beginning to become more fluid. But even when an individual tries to attain the greatest possible degree of independence, he will still be swayed by the existing spiritual structures — consciously or unconsciously. For he, too, must be able to speak of life and death and the human condition to other members of the society in which he’s chosen to live; he must educate his children according to the norms of that society, fit into its life. Epistemological sophistries cannot possibly help him attain these ends. Here, too, the relationship between critical thought about the spiritual content of a given religion and action based on the deliberate acceptance of that content is complementary. And such acceptance, if consciously arrived at, fills the individual with strength of purpose, helps him to overcome doubts and, if he has to suffer, provides him with the kind of solace that only a sense of being sheltered under an all-embracing roof can grant. In that sense, religion helps to make social life more harmonious; its most important task is to remind us, in the language of pictures and parables, of the wider framework within which our life is set.

Physics and Beyond, though out of print, is a fascinating read in its totality and well worth the search for a surviving copy. Complement this particular portion with pioneering nineteenth-century astronomer Maria Mitchell, who paved the way for women in science, on our conquest of truth, Carl Sagan on science and spirituality, Richard Feynman on why uncertainty is essential for morality, Simone de Beauvoir on the moral courage of atheism, Alan Lightman on transcendent experiences in the secular world, and Sam Harris on spirituality without religion.