On the 500th anniversary of his death, this series brings together scholars from different disciplines to re-examine the work, legacy and myth of Leonardo da Vinci.

15 Apr 2019 – Leonardo da Vinci was fascinated by the human body. His disdain for painters who did not bother to learn anatomy was barely concealed in his criticisms of those who

“draw their nude figures looking like wood, devoid of grace; so that you would think you were looking at a sack of walnuts rather than the human form”.

His bodies envisioned something very different – living mechanics – combining ideas that he explored across many fields of investigation, including animal and human dissections.

In doing so, he anticipated many questions that now preoccupy modern scientists, from the mechanics of the human body to the possibility of a mechanical body for humans. 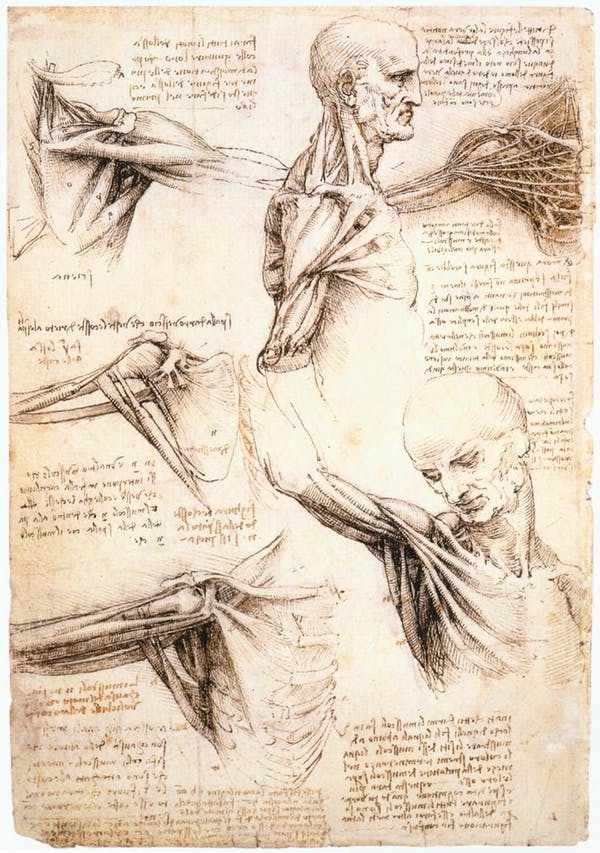 Leonardo was born the illegitimate son of a notary and a peasant woman. He did not attend a university and had a rather haphazard and informal education. His knowledge of the human body was self-taught and largely experiential.

Leonardo’s notebooks are filled with an explosion of ideas, in treatises, sketches and jottings. One note mentioned the following:

Have Avicenna’s work on useful inventions translated; spectacles with the case, steel and fork and…., charcoal, boards, and paper, and chalk and white, and wax;…. …. for glass, a saw for bones with fine teeth, a chisel, inkstand …….. three herbs, and Agnolo Benedetto. Get a skull, nut,— mustard.

In this jumble of thoughts, we see Leonardo’s interest in the body, one he would explore through dissection. Perhaps his most famous dissection was that of a man who claimed to be over 100 years old, at the Santa Maria Nuova hospital in Florence in 1506.

Leonardo had chatted to this man on the night he passed away:

“And this old man told me, a few hours before his death, that he was over a hundred years old and he was conscious of no bodily failure, apart from weakness.”

After he had died, Leonardo proceeded to probe the man’s corpse. 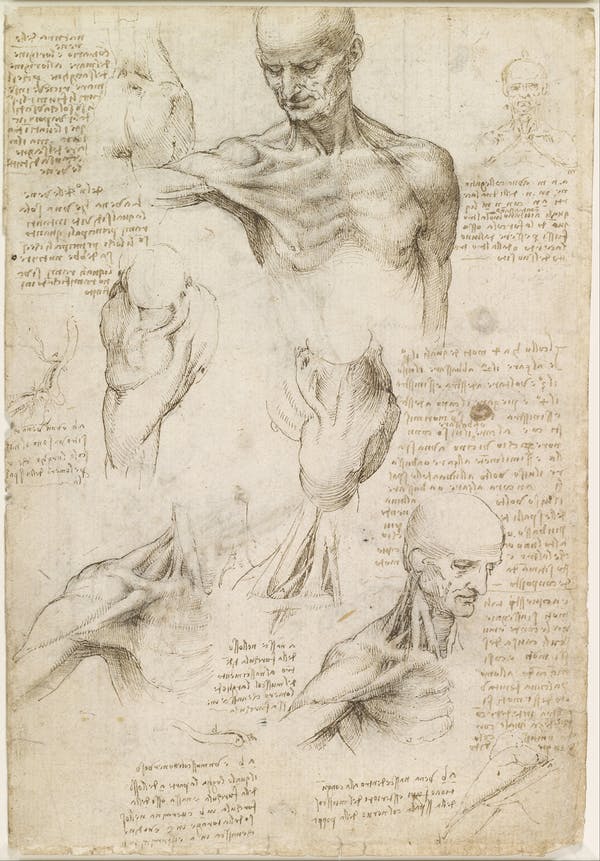 “If you wish thoroughly to know the parts of man, anatomically, you – or your eye – require to see it from different aspects, considering it from below and from above and from its sides, turning it about and seeking the origin of each member.”

Leonardo was thinking outside the box. His approach connects anatomy to engineering.

His interest in machinery linked to his fascination with motion. His drawings vividly illustrate how components of machines, animals and humans are designed to move, and how motion and forces are transferred from one component to another.

Strong analogies are formed between mechanical and biological parts, such as the role of ropes and cords, and sinews and tendons. 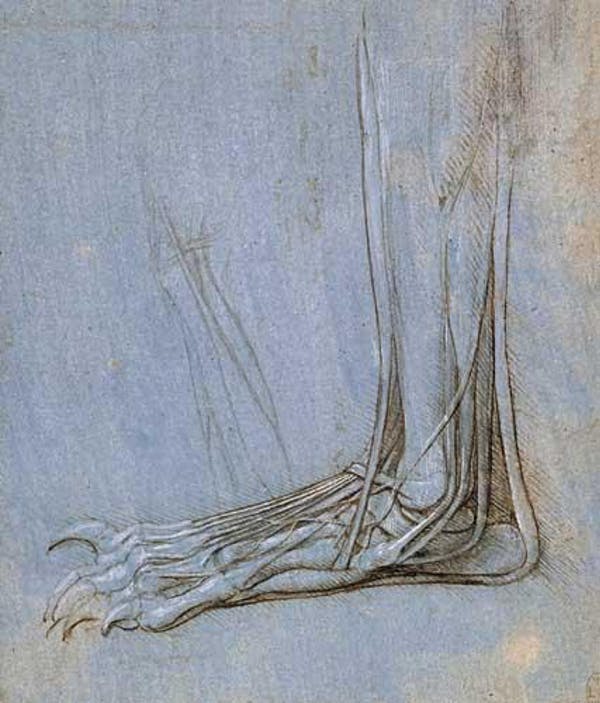 Leonardo was fascinated by the change of form over time, whether in the processes of nature or the gradual disintegration of the human body. He found the 100 year-old man’s artery, for instance: “to be dry, shrunk and withered.”

Alongside this autopsy, he recorded another dissection:

“of a child two years old, in which I found everything the opposite that of the old man”.

Leonardo also had a lifelong interest in depicting decrepitude and the grotesque in human form. In his work, we see the contrast between robust mechanical forms and ageing bodies.

With his designs for various forms of automata – machines that operate alone by following predetermined instructions for movement – some of which witnesses suggest he brought to life, Leonardo moves from the human body, which is subject to weakness and ageing, to the wholly mechanical body. 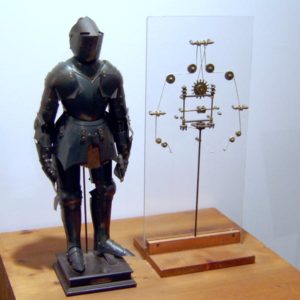 The mechanical knight, for example, that he sketched in the Forster notebooks appears to have been designed from clockwork and geared mechanisms. It could move its arms, hands and legs, and turn its head.

Through Leonardo’s exploration of the human body, we see his fascination with engineering, motion, anatomy and ageing, topics that still preoccupy us scientifically today.