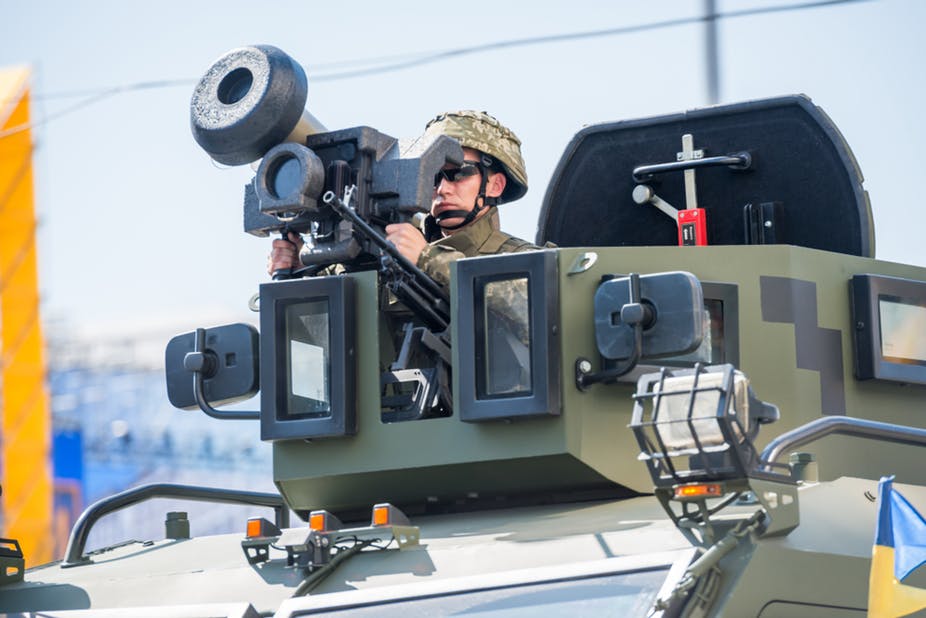 A solider poses with a Javelin anti-tank system during a military parade in Kiev, Ukraine. Shutterstock

27 Mar 2019 – Selling lethal weapons to Ukraine is the equivalent of pouring kerosene onto a flame. But ongoing hostilities between Ukraine and Russia – including the Kerch strait crisis, which began late last year when Russia intercepted three Ukrainian vessels and took 24 crew members captive – are also a major business opportunity for the world’s largest defence contractors. Despite the risk of serious escalation, these companies continue to provide Ukraine with lethal aid so it can defend itself against Russia – for a price, of course.

The US special representative for Ukraine negotiations, Kurt Volker, stated recently that Washington remains committed to providing support to Ukraine and its military, including anti-tank systems. He even hinted that the US is considering expanding the types of lethal aid that it could begin selling to Ukraine, saying: “We also need to be looking at things like air defence and coastal defence.”

This is a troubling prospect. In March, US army general Curtis Scaparrotti said that the US could also bolster the Ukrainian military’s sniper capabilities. Speaking to the Senate Armed Services Committee, he said:

There are other systems, sniper systems, ammunition and, perhaps looking at the Kerch Strait, perhaps consideration for naval systems, as well, here in the future as we move forward.

This comment has been widely underreported and has not received nearly as much attention as it deserves considering the potential consequences.

At worst, more lethal aid could escalate the conflict further. At best, it will continue to keep alive a conflict that has already claimed more than 10,000 lives. Finding a straightforward policy alternative is difficult, but sending more lethal aid to achieve the unattainable goal of Ukraine defeating Russia is certainly no solution.

Despite attempts by Volker and Scaparrotti to market the proposition as a way to help Ukraine defend itself against Russia, the immediate benefits seem clearer to America’s weapons manufacturing sector than to Ukrainian civilians, who will undoubtedly get caught in the crossfire.

The Stockholm International Peace Research Institute reported that the US is home to five of the world’s ten largest defence contractors. Lockheed Martin, by far the largest in the field, in 2017 had an estimated US$44.9 billion in arms contracts globally. 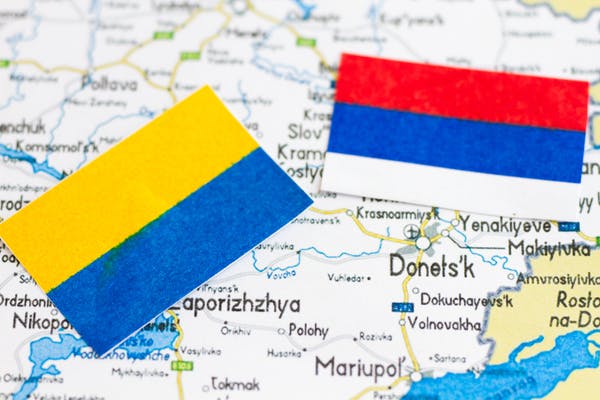 More weapons will likely only inflame the conflict. Shutterstock

The company was also contracted (with Raytheon) in 2018 to provide Ukraine with Javelin anti-tank missiles.

The US Pentagon said: “The Javelin system will help Ukraine build its long-term defense capacity to defend its sovereignty and territorial integrity in order to meet its national defense requirements.”

But Lockheed Martin likely profited handsomely from the deal. Meanwhile, the company’s financial reports showed fourth quarter 2018 net sales of US$14.4 billion, compared to US$13.8 billion in the fourth quarter of 2017. This year, the company is expecting sales to grow by as much as 6%. This is unlikely to be the case if the number of conflicts around the world declines.

It’s clear why Washington wants to sell more weapons to Ukraine. But whether Ukraine remains receptive and willing to continue buying them may hinge on the outcome of the upcoming presidential election, which is scheduled for March 31.

Presidential candidate Volodymyr Zelensky, who is currently leading in the polls, seems to offer hope that Ukraine may change its current strategy. This is reflected in a statement Zelensky made in March in which he emphasised the need to negotiate with Russia in order to “save people’s lives”.

Is there a solution?

As well as better diplomacy, Zelensky also sees direct democracy as a way to resolve the crisis. Rather than pursuing the same ineffective policy, which has achieved absolutely nothing except for a greater death toll and growing human misery, he proposed a referendum on the outcome of his negotiations with Russia on the conflict in eastern Ukraine. This approach might not lead to a quick fix or immediately restore peace in the region – but it is more likely to succeed than simply supplying more weapons with which to prolong the fighting.

The West should not abandon its rhetoric of support for Ukraine’s territorial integrity. But policymakers and society more broadly should be careful not to assume that simply selling more weapons to Ukraine will yield a definitive victory over Russia and its separatist allies.

While the ongoing war in the the eastern Donbas region and the recent Kerch incident offer an opportunity for big businesses to make a profit, it’s ordinary people who will pay the price. The current approach to deescalating the conflict needs to be dramatically reevaluated – and lethal weapons must be taken off the negotiating table.