‘We Are Hostages’: Indigenous Mapuche Accuse Chile and Argentina of Genocide 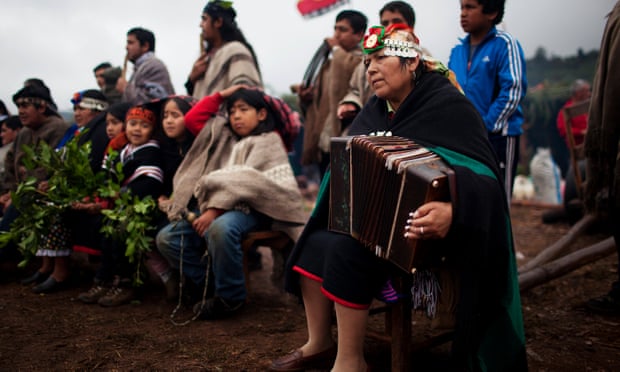 Around 1.5 million Mapuches live in Chile, and 200,000 in Argentina.
Photograph: Rodrigo Abd/AP

12 Apr 2019 – Representatives of South America’s indigenous Mapuche people have petitioned the International Criminal Court (ICC) to take action against the governments of Chile and Argentina for acts of genocide and crimes against humanity.

Lonko Juana Calfunao, who led the delegation to The Hague on Thursday said that since their formations, both countries had committed crimes including genocide and torture against their indigenous populations.

“In the so-called Pacification of Araucania, the Chilean army with the complicity of the Catholic church, invaded our territory, burned our [homes], killing our people and drowning babies in the rivers,” Calfunao told the Guardian. “Even today … we are hostages of states that don’t recognize our Mapuche nationality.”

The legal battle has a curious origin and backer: the Kingdom of Araucania and Patagonia, the surviving government in exile of an ephemeral 19th-century state.

In February, the ICC received a letter headed with the kingdom’s coat of arms accusing Chile and Argentina of historical and contemporary crimes.

Its author, Frédéric Luz, 55, is a Frenchman who has, since March last year, held the title of prince of Araucania and Patagonia – the seventh since Orllie de Tounens, a French lawyer, was proclaimed sovereign by Mapuche chiefs in 1860.

Calfunao said that her Mapuche ancestors accepted De Tounens as part of a strategy to protect themselves from Chilean invasion. At the time, Chilean forces were massing north of the Río Biobío, which separated them from the indigenous-controlled territory to the south. Under the “doctrine of discovery”, colonial powers were forbidden from subjugating indigenous populations ruled by a Catholic monarch.

However, De Tounens was captured in 1862 and the subsequent invasion of Mapuche lands by Argentinian and Chilean forces was devastating. Over the last decade, repressive state measures and Mapuche grassroots resistance have intensified in tandem.

Under President Sebastian Piñera, the Chilean government has increased military presence in the south of the country and in November 2018 an unarmed Mapuche, Camilo Catrillanca, was killed by an army counter-insurgency unit which was pursuing car thieves, prompting a string of street protests.

The intensification of the Mapuche conflict in recent years has given a new purpose to the Kingdom of Araucania and Patagonia, long considered an absurdity by French society. Luz is learning Spanish and hopes to visit Chile shortly to meet with indigenous groups.

“We’re a serious organization, not a micro-nation of fantasists,” he says. “My only objective is to fight for the recognition of Mapuche culture, language and religion and one day, who knows, an autonomous Mapuche state.