Where the Silk Roads Meet the Mighty Mekong

The small wooden boats slowly make their way down the brown waters of the Mekong at sunset. Flowing meditation – just enjoying the silence, watching the river flow. Then, suddenly, in the distance, an apparition – a row of cement Ts. 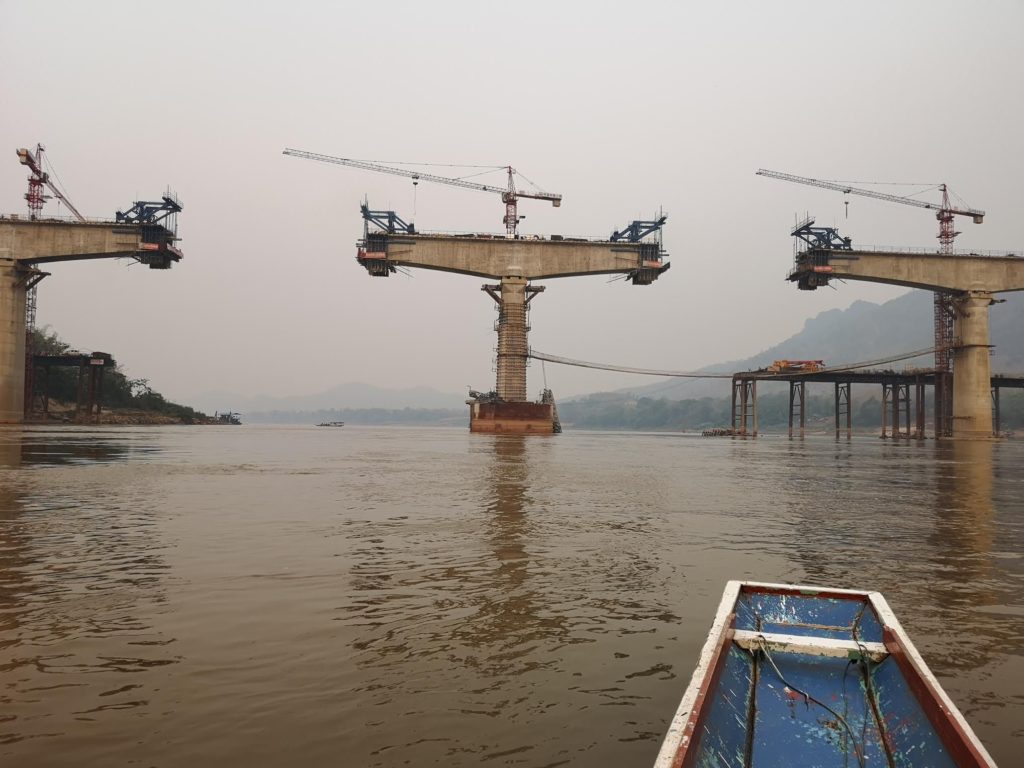 The under-construction bridge over the Mekong, part of the Kunming-Vientiane high-speed rail link to be completed in 2021, part of the Belt and Road’s China-Indochina Connectivity Corridor. Photo: Pepe Escobar

Like a high-tech divinity, the 21st century irrupts across the immemorial Mekong, which in Laos is appropriately named Mae Nam Khong or the Mother of Waters.

Welcome to the China-Indochina Peninsula Economic Corridor, one of the key planks of the New Silk Roads, or Belt and Road Initiative (BRI).

The apparition on the Mekong is an under-construction bridge, part of the 420 km-long, US$6 billion worth high-speed railway connecting Kunming, in Yunnan province, to the Lao capital Vientiane and then, further on down the road, bound to unite mainland Southeast Asia all the way to Singapore.

It’s tempting to regard the bridge as a post-modern naga. In the inestimable The Enduring Sacred Landscape of the Naga, published by Mekong Press, Lao scholars Mayoury and Pheuiphanh Ngaosrivathana track the literally fantastic world of animated beings in the Mekong basin – totemized reptiles such as the serpent, or ngu, the salt-water crocodile (ngeuak) and supernatural beings such as the naga.

These tutelary spirits, controllers of water and rainfall, local proprietors of the soil and guardians of its fertility, wealth and welfare – these are the autochthonous spirits tamed by Buddhism collectively known as naga. Worship of the naga – in rituals, festivals, daily life – has shaped the lives and life cycles of Mekong populations for millennia.

The new naga will take the form of Made in China high-speed trains – for passengers of course, but mostly for cargo – crossing the Mekong back and forth and crucially bypassing the Maritime Silk Road along the South China Sea.

The numbers by the Lao Ministry of Public Works and Transport are impressive – the Kunming-Vientiane high-speed railway, started in 2016 and to be completed in 2021, features 72 tunnels, 170 bridges and will have trains speeding along at 160 km an hour.

The China-Indochina Peninsula Economic Corridor is one of the six main BRI corridors identified back in March 2015. These are BRI’s land arteries – the backbone of an intricate, integrated continental landmass featuring multiple layers of transportation, telecom, energy infrastructure, financial, trade, political and economic projects and agreements.

Northern Laos, a maze of mountains, jungles and a few rivers, for a long time was virtually isolated until the opening of borders with Vietnam and China led to immense economic and demographic transformations – with traditional rice-based agriculture giving way to speculative commercial agriculture.

Laos is landlocked between powerful neighbors China and Thailand.

A North-South economic corridor has been the favored strategy by both China and Thailand to develop commerce, tourism and investments in Laos. Mountain people minorities linked to Chinese culture such as the Chin Haw, Akha, Yao and Hmong, who speak Lao and know Lao culture, were cast as the perfect intermediaries and partners.

Especially in the BRI era, connections with China, both in the formal and informal economy, are now overtaking connections with Thailand. Vientiane – not exactly a transparent government – has encouraged Chinese investments of extremely dubious value in luxury hotels, malls and casinos in Special Economic Zones (SEZs) along the Chinese border.

At the same time, Chinese companies have been pouring billions of dollars into the productive development of these SEZs, as well as in dams, mines and rubber plantations.

There’s a sort of mini-boom now in the three northern Lao provinces of Luang Namtha, Oudomxay and Luang Prabang. More than 7,000 Lao people are working on the Kunming-Vientiane railway, most of them residents who live nearby.

But that still pales compared to the more than 40,000 Chinese working for six Chinese contractors, in six different segments, duly supervised by Huang Difu, chairman of the Laos-China Railway Company and general manager of China Railway International.

The railway will be 70% financed by Beijing, the remaining 30% for Vientiane – roughly $840 million – are supported by a low-interest Chinese loan of $500 million. A Lao bauxite mine plus three potash mines secure the Chinese loan.

Kunming-Vientiane is a stark example of how BRI projects usually face a maze of political and financial hurdles. The original design, from 2011, predates the New Silk Roads, which were launched in 2013. Much of the problems have to do with the toxic land for development equation – a situation not much different in Cambodia and Myanmar.

In Luang Prabang, I was told of countless cases of villagers forced to leave their homes and who are still waiting for fair compensation from Vientiane. In Laos there are a dizzying 242 different categories of compensation – spanning everything from mango trees five years of age or older, to hardwood and teak trees less than one year old, not to mention crucial land in main transportation hubs.

In fact, the former royal capital – a fragile jewel that must be preserved from the mass tourism hordes at all costs – receives more attention from the EU and Asean, not to mention Unesco, than from the bureaucrats in Vientiane.

All these worries at least disappear every single morning at the binthabat, or rice-collecting ritual, when rows of Buddhist monks are offered rice in their earthen bowls by rows of women on their knees.

In Global South terms, Laos is booming. In mainland Southeast Asia, the Chinese strategy is mostly focused on Laos and Thailand. Beijing expects that the lure of those cross-border SEZs is able to convince skeptical Vietnam and Myanmar of Chinese “flexibility.”

Much more than interest rates on Chinese loans – which in fact are small – the red alert on BRI-related projects in Laos concerns the environmental impact, and the fact that Laos is a poor, landlocked transit nation, it may be paying in the future a disproportionate social and environmental cost for projects that mainly benefit the Chinese economy.

A sharp contrast is offered by Ock Pop Tok, or East meets West in Lao, an indigenous model of fair trade, sustainable business, socially conscious enterprise founded by a Lao and an Englishwoman in 2000, managed by women, and for the benefit of Lao women.

Ock Pop Tok started with five weavers and now links to more than 500 in villages across Laos. Textile production in Laos carries an immensely significant cultural value. Technical and esoteric knowledge has been transmitted from generation to generation in each village specific to a subgroup, a powerful sign of strong cultural identity.

Silk has been cultivated in Laos for more than 1,000 years. Ock Pop Tok managed to assemble master weavers using techniques practiced by the Tai Kadai ethnic group since 800 BC, when they left Yunnan.

Everything, of course, is bio – natural dyes, handmade. I could not resist an absolutely stunning silk prayer flag weaved by Meng. Support for this added-value artisan knowledge translates into rural populations staying in their communities instead of betting on a usually troublesome urban exodus.

Ock Pop Tok also promotes Hmong artisans. Hmongs are animists who came from Tibet and Mongolia by the early 19th century. There are more than 49 ethnic groups in Laos. Westerners classify them by language – Mon, Khmer, Sino-Tibetan, Tai, Kadai – while in Laos they are recognized by where they live – on the plains, in plateaus or high in the mountains.

It’s this extremely complex, fragile, social and environmental system that from 2021 will have to learn to coexist with the era of the high-speed naga.