Gaza Has Made Its Choice: It Will Continue to Resist

And no amount of Israeli propaganda and Eurovision whitewashing can erase the legitimacy of its right to do so. 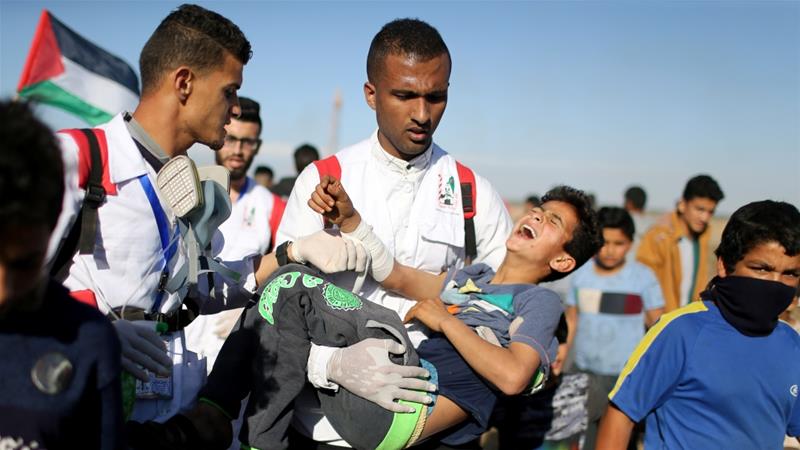 A wounded Palestinian boy is evacuated during a protest at the Israel-Gaza fence, in the southern Gaza Strip on May 3, 2019.
[Reuters/Ibraheem Abu Mustafa]

Again, the victims were children and women. Fourteen-month-old Palestinian toddler, Siba Abu Arrar, was killed along with her pregnant aunt, Falastine, who succumbed to her wounds shortly after American-made, Israeli warplanes targeted their home in Zeitoun neighbourhood.

On Friday, like all the previous 57 Fridays, I joined thousands of peaceful protesters at the eastern fence of the Gaza concentration camp, where Israeli snipers shot and killed four Palestinians and injured 51, including children. One of those killed was 19-year-old Raed Abu Teir, who was walking on crutches, having been injured during previous protests.

Calls for a ceasefire were made as Israel’s Prime Minister Benjamin Netanyahu vowed to launch “massive strikes” in the hope of killing the largest possible number of Palestinians by targeting residential areas.

As with previous truce initiatives, this time once again Israel and the Palestinians – the oppressor and the oppressed – were equated as “two sides to a conflict” and what constitutes legitimate resistance under international law was put on the same level as a brutal illegal occupation. The fact that Israel has an actual army, disproportionately bigger firepower and is an occupier was neglected as usual, and so was the stark difference in the death toll: 24 Palestinians and four Israelis.

Like all previous ceasefires mediated by the Egyptian authorities and the United Nations, this one also aimed to maintain “stability” in the open-air concentration camp that Gaza is, for as long as possible, by demanding that any form of resistance is subdued.

In this case, the Israeli government is eager to quiet Gaza down ahead of the generous opportunity European countries are giving it to whitewash its war crimes by hosting the Eurovision song contest in Tel Aviv, an hour’s drive away from the strip.

As in the past, Palestinians are now expected to gratefully accept a “period of calm” where Israeli bombs are not raining on their houses and its blockade continues to strangulate Gaza.

In fact, what has come to be regularly required of the Palestinians is to conduct themselves as “house Palestinians”, and be thankful to their white Ashkenazi masters for the breadcrumbs they let them have in order to barely survive.

They are to give in to a slow death, die like cockroaches, showing no form of rebellion, and accept that if they die resisting, then it would be their own fault.

But enough is enough!

Palestinians will no longer accept the dictates of the so-called “international community” which continues to favour Israel and cover up its war crimes. Any talk of improving the conditions of oppression in light of the great sacrifices made by our people is a betrayal of Palestinian victims.

Any ceasefire agreement that does not lead to the immediate lifting of the blockade on the Gaza Strip and the reopening of the Rafah crossing, and all the other crossings in a manner that allows the inflow of fuel, medicine, and all other basic goods, and does not include provisions for ending what the Israeli occupation and apartheid – will not be accepted.

We will no longer allow Gaza to be severed from Palestine and the historical context behind the suffering of its people. This is not a “conflict”, as the Israelis like to present it, with a hostile armed group.

It is an occupation, launched by a settler-colonial power which seeks to ethnically cleanse an entire indigenous population in order to solidify and legitimise its colony. What is happening in Gaza is incremental genocide, not a “security operation”.

The barbaric massacres committed by apartheid Israel since 2006, have claimed the lives of thousands of Palestinians, the majority of them civilians, including many children. Entire families have been wiped out in broad daylight in conjunction with the systematic destruction of hundreds of Palestinian homes; doctors and paramedics were killed while on duty and so were journalists. Tens of thousands have been permanently disabled in these wars.

We, the Palestinians in Gaza, have already made our choice. We will not die dishonourably a slow death while thanking our killers under the self-deception that portrays slavery to the occupier as a fait accompli.

No, we will continue to fight for our dignity, for ourselves and for our children. We, members of the Palestinian civil society, have long argued that the way forward should be people’s power – the only force capable of tackling the huge asymmetry of power in the struggle against Israel.

And our Great March of Return has demonstrated this. We successfully broke efforts to intentionally separate the Gaza “conflict” from its roots and made our demands heard across the world. We don’t want another short-term ceasefire or slight “improvement” in living conditions under a “deal of the century”. We don’t want breadcrumbs. We want to return to our lands, we want our rights under international law to be recognised.

That is why, each Friday, we continue to call for Boycott, Divestment, Sanctions (BDS) against Israel and we hail the effort of various groups and individuals across the world – the true international community – who have joined our efforts.

We now call on all Eurovision artists to give up their participation in whitewashing the murder of toddlers, pregnant women, medics, journalists, and musicians and the destruction of civilian homes, hospitals, schools and cultural centres.

It is time for you, as well as the rest of the art world, to stand on the right side of history – just like they did a few decades ago during the apartheid era in South Africa – and boycott Israel.

Haidar Eid is an associate Professor at Al-Aqsa University in Gaza.